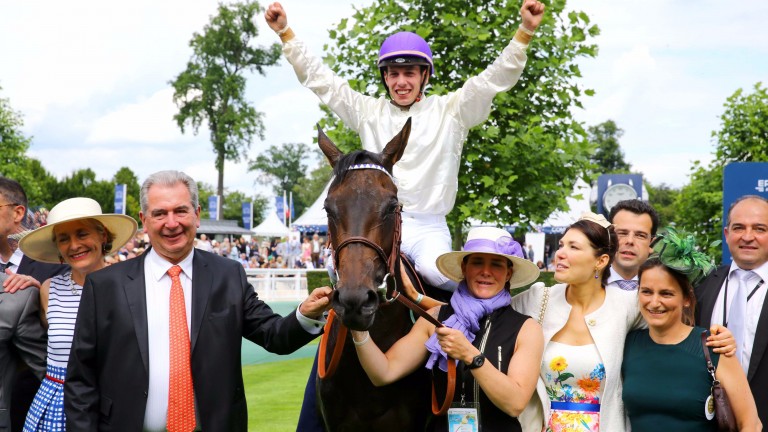 La Cressonniere is a spectacular addition to Shalaa's book - and to the Shadai broodmare roster
Â© APRH
1 of 1
By James Thomas 5:03PM, MAY 5 2017

Unbeaten dual Group 1 winner La Cressonniere has become the latest high-class recruit to the exceptional collection of broodmares at Teruya Yoshida's Shadai Stallion Station. The daughter of Le Havre will stay in Normandy for her maiden cover, by Al Shaqab’s young sire Shalaa, before being shipped to her new owner’s farm in Japan - where she will doubtless be considered an ideal mate for its champion sire Deep Impact.

The four-year-old was trained by Jean-Claude Rouget for Ecurie Antonio Caro and Gerard Augustin-Normand to success in a trio of Listed events, the Group 2 Prix de la Nonette, and the memorable Classic double of the Poule d’Essai des Pouliches and the Prix de Diane. She was retired a couple of weeks ago after the recurrence of the back injury that curtailed her 2016 campaign.

Her exploits contributed significantly to the rapid ascent of Le Havre, who began his career at Haras De La Cauviniere in 2010 at a fee of just €5,000, but is now rated one of the best young sires in Europe at €60,000.

La Cressionnere became the second daughter of Le Havre to complete the French 1,000 Guineas and Oaks double when bred from his base fee. She followed in the footsteps of Avenir Certain, who had emerged from the stallion’s first crop.

Friday's announcement represents another huge feather in the cap of Al Shaqab’s Shalaa, in his first season at Haras de Bouquetot at a fee of €27,500. The 2015 Prix Morny and Middle Park Stakes winner has also included dual Prix de l’Arc de Triomphe winner Treve in his first book.

FIRST PUBLISHED 5:03PM, MAY 5 2017
The announcement is another huge feather in the cap of Al Shaqab’s Shalaa, in his first season at Haras de Bouquetot