First-crop son of Gregorian headed much of Wednesday's trade 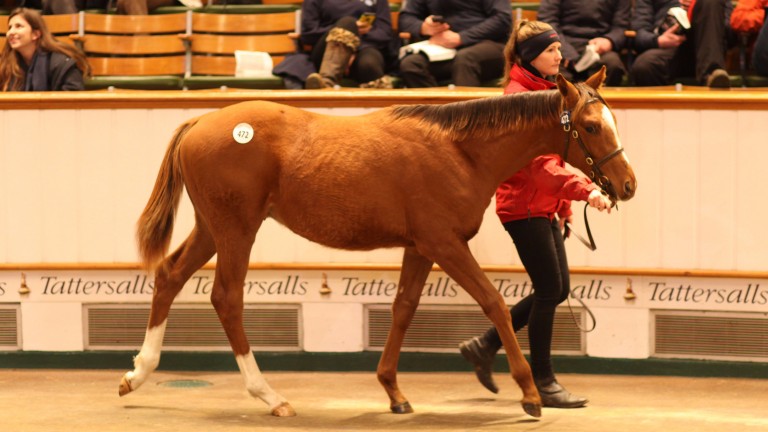 First-crop sires were the order of the day during the opening session of the Tattersalls December Foal Sale which kicked off in Newmarket on Wednesday, with much of the day's trade headed by a colt by the Group 2 winner Gregorian who went to Rathasker Stud's Madeline Burns for 47,000gns.

"We thought he was very like his sire," said Burns. "He's a good strong colt, a good walker with a good mind. And he came from good breeders.

"Gregorian is definitely stamping his stock. They're very like him - strong, active with good minds. Gregorian himself was the subject of a conformation talk at Tattersalls during an open day. They had him standing here in the ring and I'm told he was a saint."

The colt is out of the winning Diamond Green mare Miskin Diamond and was bred by Kelly Thomas.

Gregorian, a seven-year-old son of Clodovil who resides at the National Stud in Newmarket, stood his first two seasons on stallion duty at a fee of £4,500. The Maurice Burns-owned stallion covered 120 mares in his first year at stud and 58 in 2016. By the close of trade yesterday the sire had had six lots sell for a total of 79,200gns and an average of 13,200gns.

Despite the appetite for the progeny of first-crop sires it was a colt by the Cheveley Park Stud stalwart Kyllachy that topped trade, having gone the way of Kate Barclay for 48,000gns. The March-born colt was offered by Dwayne Woods' Brook Stud.

"We bred the dam Amicable Terms and bought the granddam a while ago," said Woods. "We have lots of the family, including a half-sister to Rock Of Gibraltar who's further back on the page. This colt looks speedy, he's a really straightforward individual, sound and has a great temperament. He deserved to make that price."

Barclay was tight-lipped about exact plans for her purchase, but implied that the colt would be reoffered at some stage.

Delegator may have had just 27 first-crop runners across Europe in 2016, but seven of those have won, including the Group 3 Firth Of Clyde Stakes winner Delectation, a fact which had not been missed by the throng of pinhookers at Tattersalls on Wednesday.

Tally-Ho Stud snapped up a colt out of Irrational from the Bearstone Stud draft for 43,000gns, the session's third-priciest lot, while Brendan Holland's Grove Stud signed for a colt from Stringston Farm for 35,000gns.

Tried and tested for Malone

Among the other established sires with progeny on offer the ever-popular Pivotal made an impact, with a filly from Cheveley Park going to agent Tom Malone for 40,000gns.

The bay filly is out of Expect, an Invincible Spirit half-sister to Listed winner Don't Touch and a granddaughter of the Coronation Stakes winner Exclusive. The names Echelon, Integral and Entrepreneur also appear further back in the pedigree.

"She has a proper page and we have plenty of the family, so it is good to spread it around a little," said Cheveley Park managing director Chris Richardson. "With the numbers we've got it's always difficult to make the decision to sell. Hopefully she will go on and be good for the new connections."

As was the case during the Goffs November Foal Sale which took place last week, there was a rather selective nature to the market, with 187 of the 260 lots on offer having sold for a clearance rate of 72 per cent. The aggregate stood at 2,102,350gns, the average was 11,243gns and the median was 8,000gns.

The sale continues on Thursday at 9.30am.

FIRST PUBLISHED 8:55PM, NOV 23 2016
This colt looks speedy, he's a really straightforward individual, sound and has a great temperament. He deserved to make that price