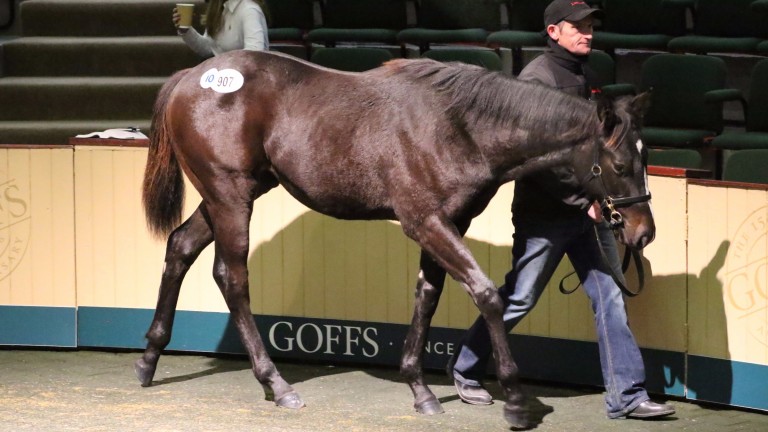 The Kodiac colt who topped trade on day four when bought by Ennistown Stud
Peter Mooney
1 of 1
By Aisling Crowe 6:18PM, NOV 17 2016

Trade moved up several notches for the penultimate session of the Goffs November Foal Sale on Wednesday, with two lots breaking through the six-figure barrier.

The insatiable desire for the progeny of Kodiac dominated proceedings with three of the top six lots being by Tally-Ho Stud's sensational sire.

The highest priced paid so far was for the first foal out of the winning Moss Vale mare Spinaminnie, and speed coupled with speed sparked a bidding frenzy.

Ruairi O'Coileain of Ennistown Stud, who bought a filly by the same sire for €70,000 on Tuesday added to his haul with Wednesday's sale-topping colt, landing the Linacre House Stud homebred for €150,000.

"He's as nice a foal as I have seen here all week," said O'Coileain. "You've to go to these levels if you want to buy the good horses. We will see how smart an investment it is this time next year.

"Linacre did a great job with him and he's a very well-prepared foal, I hope there is more to come from him as he grows."

The February-born foal comes from a family laden with black type as his second dam Spinamix has produced nine winners, six of whom are black-type performers.

Kodiac's hot streak kicked off with the colt foal out of Romie's Kastett, a sister to Norse Dancer, who was runner-up in three Group 1 races and finished third in three more.

Frannie Woods brought the hammer down with a bid of €110,000 for the foal from Clodagh McStay's Oaklawn Stud.

He is a half-brother to three winners from as many runners produced by the dam, and the family traces back to southern hemisphere champions Good Faith and Daffodil as well as Group 1 Moyglare Stud Stakes heroine Mail The Desert.

Woods said: "I fell in love with this foal when I saw him earlier in the week and he's by a top-class sire with a decent brother to run for him next year [Eagle Spirit]. He's a classy individual and we will take our time with him as he's a late foal."

Eagle Spirit, by Holy Roman Emperor, won his maiden and finished fourth in the Group 2 Beresford Stakes for trainer Joseph O'Brien. He is obviously thought well of by connections as he holds entries in the Derby and Irish Derby for 2017.

His half-brother will be offered for resale in the future, as will the foal that continued the Kodiac show, the son of the Bernstein mare Wonderful Town, an unraced half-sister the high-class Magic America.

Willie Browne signed at €82,000 on behalf of Oaks Farm for the strapping bay colt who is also descended from the Irish St Leger-placed mare Delilah and Grade 1 Sword Dance Invitational winner King's Drama.

Hubert Honore bought the fourth Kodiac foal to set the ring alight, the son of the Argentine Grade 2 winner Bailonguera. He is a half-sister to the black-type mare Bargouzine who is the dam of Group 3 winner Baghadur.

Honore said: "He's out of an older mare but he comes from a lovely family associated with Madame Fabre and Benghour could be a good horse in Hong Kong. He has been bought for a syndicate and we will try to sell him next year in France."

It has been a stellar week for Tally-Ho's half-brother to Invincible Spirit, as all three foals who have sold for more than €100,000 at Goffs so far have been by the 15-year-old stallion.

Chinese and Australian buyers have been active at Goffs' sales so far this year and they made an impact yesterday, as Robert Roulston went to €90,000 on behalf of Rifa Mustang Pty to secure the most expensive foal by Dark Angel sold so far this week.

The filly, consigned by Jacqueline Norris's Jockey Hall Stud, is out of the Aga Khan-bred mare Sindjara, a daughter of the same owner-breeder's Listed Lingfield Oaks Trial winner Sindirana, who herself is out of a half-sister to the wonderful champion Sinndar.

"She's been bought for a Chinese company who have racing interests in Europe and Australia," said Roulston. "They are mainly based in Australia where they have around 50 horses in training but this filly will remain in Europe to be trained, most likely with Mikael Delzangles, who already trains a horse for Rifa Mustang.

"This is my first time at Goffs and I have been very impressed with the set-up here. It's a really good complex," he added.

Yeomanstown Stud snapped up the most expensive foal from the first crop of Olympic Glory to sell at Goffs so far this week. The chestnut filly is the first foal of the winning New Approach mare Broadway Duchess who is out of Annee Lumiere, a Giant's Causeway sister to American Grade 2 winner Little Treasure and to the dam of Grade 2 and Listed Sandringham Handicap winner Rhythm Of Light.

"She was the best filly today," said David O'Callaghan. "She really was the standout and Olympic Glory was a good racehorse who is getting good stock. She will probably go to Newmarket to sell as a yearling."

Yeomanstown also stand Camacho, who was the sire of an €85,000 foal on Wednesday and O'Callaghan is pleased with the reception Camacho's progeny are receiving.

"This is a big year for Camacho as it is the first time he has had a continuous large book from his two-year-olds through to yearlings and foals and the market is responding to that. He's a proven stallion who stands for just €7,500," O'Callaghan added.

Last but not least

The last lot in the ring was a son of Ruler Of The World and he became the most expensive foal by the sire so far when selling to Glenvale Bloodstock for €96,000.

Consigned by Middlelane Farm on behalf of MLF Bloodstock, the colt is out of a Cape Cross half-sister to Group 3 winner Graphic and is also related to the dual Group 2 winner for Mick Channon Halicarnassus.

FIRST PUBLISHED 6:17PM, NOV 17 2016
He's out of an older mare but he comes from a lovely family associated with Madame Fabre