Coplow due to foal to Dubawi later this month 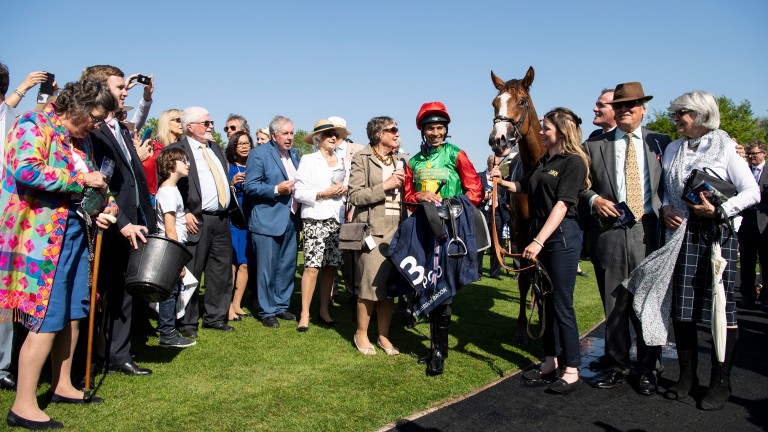 Kingman, whose exciting first crop of three-year-olds includes unbeaten juvenile Calyx and Oaks hope All Our Tomorrows, has been chosen by Stowell Hill Partners to cover Coplow this spring.

The dam of last year's surprise 1,000 Guineas winner Billesdon Brook is also responsible for Listed scorer Billesdon Bess from just two runners to date, and is expected to foal down to Dubawi later this month.

Kingman, an eight-year-old son of Invincible Spirit, will stand for a career-high fee of £75,000 this spring following the exploits of Coventry Stakes winner Calyx and Autumn Stakes scorer Persian King.

"Kingman got off to a very good start with his two-year-olds," says Jeanette McCreery of Stowell Hill Partners, whose late husband Bob purchased Coplow's dam Anna Oleanda for 45,000gns at the 2005 Tattersalls December Mares Sale.

Anna Oleanda is out of German Oaks heroine Anna Paola - also the ancestress of Annie Power, National Defense and sibling pair Helmet and Epaulette - and has done more than her fair share to keep the family's name in lights.

While Coplow never won a race, she showed glimpses of promise in placing three times for Richard Hannon snr, and with the two Billesdon sisters has marked herself out as one of the most exciting young producers in Europe.

There is more in the pipeline, with John Gosden having snapped up her Showcasing filly for 380,000gns at the 2017 Tattersalls yearling sales, while her two-year-old Sepoy filly has been broken in and is likely to grace Richard Hannon's Herridge Racing Stables in the near future.

Middle Club - who is carrying to Exceed And Excel and has a yearling filly by Frankel who fetched 700,000gns from Hugo Lascelles as a foal - will visit one of Darley's newcomers in Champion Stakes scorer Cracksman, who stands at Dalham Hall Stud at a £25,000 fee.

"I thought Cracksman was amazing value and thought his stud fee would have been double," says McCreery.

Like Coplow, another Stowell Hill Partners mare due to visit a second-season sire this spring is Bianca De Medici, who is pencilled in to Group 1-winning miler Toronado. The son of High Chaparral notched up 24 first-crop winners last year, and is a €12,000 option for breeders at Haras de Bouquetot.

Bianca De Medici is already the dam of a black-type winner after her Mount Nelson son Boscaccio won the Group 2 Oppenheim Union-Rennen at Cologne.

The Medicean mare, who is pregnant to Territories, also shares her granddam Trevillari with dual Arc heroine Treve.

Ronaldsay, who is expected to foal to Muhaarar in early April, features on the dance card of Choisir's son Starspangledbanner, who commands a €17,500 fee at Coolmore Stud.

Her suitor sired two first-crop Royal Ascot winners in The Wow Signal and Anthem Alexander, and following careful management of his stud career, will have 69 two-year-olds running for him this season.

McCreery will have at least four horses to keep tabs on with Hannon  this season with Billesdon Brook and Anna Nerium having returned to his yard following their winter break.

They are joined by a pair of three-year-olds in Bianca De Medici's Maxios filly Mongolia and Middle Club's Medaglia D'Oro filly Clubora.

McCreery says: "They've been out in the field, rolling in the muck and have enjoyed a holiday for six weeks, and have now gone back to Richard."

Dazzling debut books for Zoustar and Roaring Lion at Tweenhills

'How could you sell a national treasure?' Winx owners ponder post-racing future

FIRST PUBLISHED 3:58PM, JAN 26 2019
I thought Cracksman was amazing value and thought his stud fee would have been double