Kingman colt given the pink and green light by Roger Charlton

Nottingham debutant Tempus is out of Dansili mare Passage Of Time 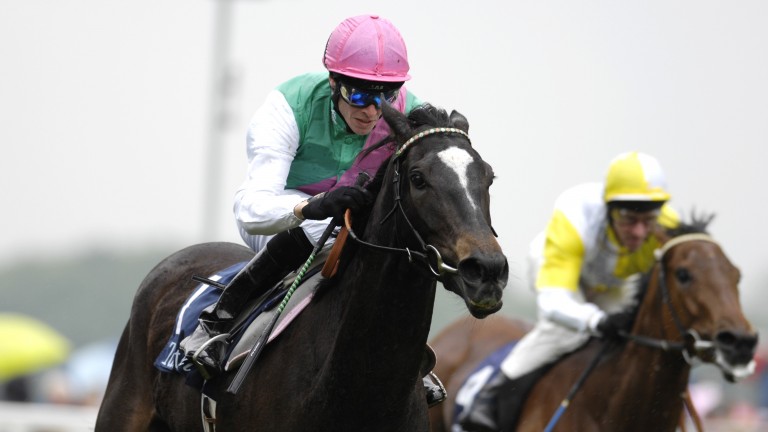 Passage Of Time landed the Musidora Stakes at York as a three-year-old
Edward Whitaker
1 of 1
By Ollie O'Donoghue UPDATED 2:15PM, OCT 9 2018

With a pedigree replete with stars who have carried Khalid Abdullah's silks with distinction, there will be a weight of expectation behind Tempus when he makes his debut in the second division of the EBF Stallions Oath Restricted Maiden Stakes (3.00) over an extended mile at Nottingham on Wednesday.

Trained by Roger Charlton and to be ridden by Kieran Shoemark, the juvenile colt is a son of flying freshman sire Kingman, winner of the Solario Stakes in the August of his two-year-old campaign and the champion three-year-old colt and miler in Europe the following year.

Tempus is out of Passage Of Time, the Group 1 Criterium de Saint-Cloud winner whose previous runners include dual Group 2 winner and National Stud sire Time Test.

Passage Of Time is a daughter of Banstead Manor stalwart Dansili, the progenitor of 21 top-flight winners including this year's Prix Rothschild winner With You.

The 14-year-old Passage Of Time is a sister to King Edward VII Stakes scorer Father Time and is a half-sister to the 2011 Falmouth Stakes winner Timepiece, and shares her granddam Clepsydra with dual Champion Stakes winner Twice Over.

Passage Of Time also has yearling and foal colts by Invincible Spirit - making them three-parts brothers to Tempus - and was covered by Ulysses earlier this year.

The Abdullah silks are fresh from big-race victory as Enable carried them to her second Prix de l'Arc de Triomphe victory on Sunday.

Five Juddmonte jewels that could sparkle on the track