Kenzai Warrior shows his technique for sire Karakontie at Salisbury 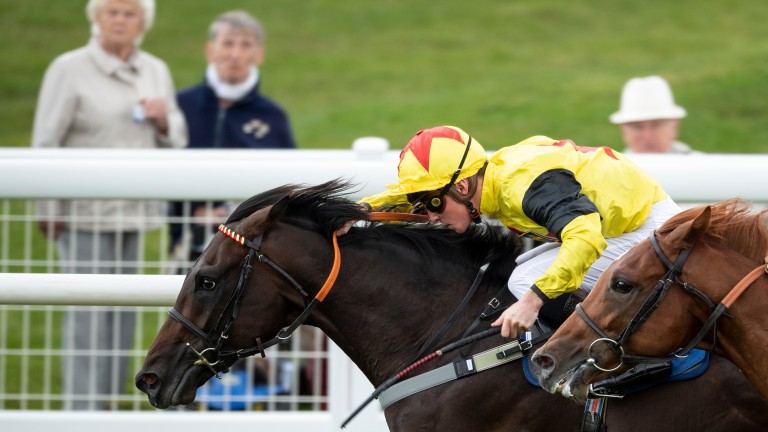 Kenzai Warrior got stallion Karakontie off the mark in Britain when scoring at Salisbury
Edward Whitaker
1 of 1
By Tom Peacock 3:41PM, SEP 5 2019

Evidence in Britain of Karakontie’s first crop had been restricted to Karak, one of the lesser achievers of Wesley Ward’s Royal Ascot raiding party, prior to an impressive Salisbury debut by Kenzai Warrior.

From his debut season standing at Gainesway in Kentucky, the stallion has a reported 90 foals and has made an encouraging start with a few runners at home. Karak herself was far happier back on a faster surface with a convincing victory in the black type Tyro Stakes at Monmouth last month.

Karakontie has understandably been supported by his owners and breeders, the Niarchos family, and they have run two of his offspring in Ireland with In The Present a maiden in five starts for Jessica Harrington but Listed placed at the Curragh.

The stallion, whose fee has remained at $15,000, was a three-time Group 1 winner for Jonathan Pease, following up the 2013 Prix Jean-Luc Lagardere in the French Guineas and Breeders’ Cup Mile.

Kenzai Warrior, a 16-1 chance for the Irish Thoroughbred Marketing Novice Stakes, produced, as his name might suggest, a battling performance on his bow for Roger Teal, resisting challenges from a prominent position under Jason Watson and getting home by a neck.

Bred by John Gunther as the first foal of Lemon Sakhee, who had some form in Canada, he was bought by Teal in combination with Howson & Houldsworth for £45,000 at the Goffs UK Breeze-Up Sale.

"I think he’s got some ability, I really do," Watson told Racing TV. "I’ve been in and sat on him a couple of times at home and he’s given me a nicer feel there, he’s always had something about him.

"He’s a bit of a frame, we were working him and he got a little bit light so we turned him away for a bit. He’s come back better than ever. He’s very professional, he jumped out well and was quite happy to be in front, there wasn’t a sign of greenness about him. I think he’s going to be quite nice."

FIRST PUBLISHED 3:41PM, SEP 5 2019
I've been in and sat on him a couple of times at home and he's given me a nicer feel there, he's always had something about him