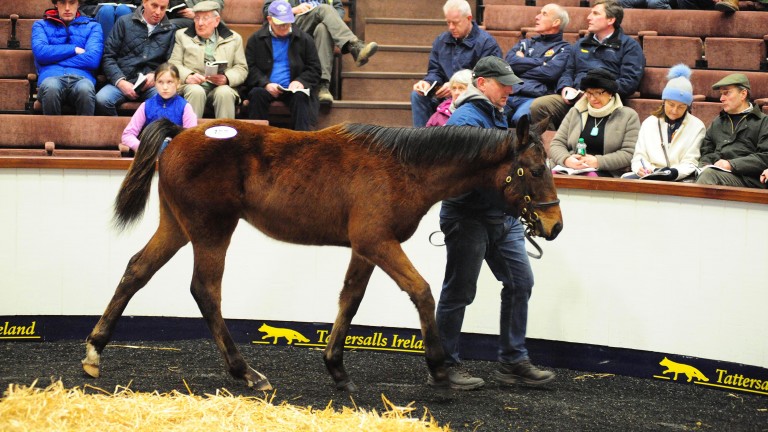 Tattersalls Ireland's February Sale has brought plenty of success to Kenilworth House Stud and as the 2018 renewal entered its closing stages last night, the Tipperary nursery managed by Gerry Ross was on course to provide the sale-topper once again.

A yearling colt by Coolmore’s National Hunt kingpin Flemensfirth out of Erins Stage, a full-sister to the Grade 3-winning chaser Theatre Guide sparked a bidding war in a crowded sales ring. Timmy Hillman was among those battling it out for the well-bred colt but in the end it was Ciaran 'Flash' Conroy of Glenvale Stud, standing with David Wachman, who prevailed, landing the spoils at a price of €62,000.

“He is a lovely horse, our pick of the sale,” said the successful bidder of the son of winning point-to-pointer Erins Stage. “He is by a very good stallion and has a lovely pedigree, it’s a really good family and he comes from a great farm.”

The bay, born in May, will likely be re-offered for sale as a three-year-old store .

After topping the 2016 sale when selling a Robin Des Champs colt out of Amber Light, Ross returned with a son of Shantou consigned by his and wife Gwen’s Limekiln Stud last year.

Yesterday it was again under the Kenilworth House banner that Ross maintained his position at the top of the February Sale league.

“This colt was always a standout, from the time he was born, there was nothing ordinary about him,” smiled the delighted Ross.

He was joined by Diana Vasicek, who established Kenilworth House Stud with her late husband Joerg, and in whose colours both La Collina and Termagant triumphed at Group 1 level on the track.

“We bought the dam from Francois Doumen as a three-year- old,” explained Vasicek.

“She has a four-year-old Beneficial filly named Erins Benefit in pre-training and we sold her three-year-old filly by Shantou at the 2015 November Sale.”

Erins Stage is a daughter of King’s Theatre, much valued as a broodmare sire. Her dam, Erintante, won the Listed Prix de Beaune Handicap Hurdle and is a full-sister to winning chaser Delgany Royal. She is also a half-sister to the dam of Caim Hill and Present Man and to the dam of Black Appalachi.

Back in foal to Shantou on a late covering, Erins Stage is likely to be rested this year, Ross indicated.

The highlight of the handful of mares offered at the end of the catalogue was expected to be Solita, a winning chaser for trainer Paul Nolan and her owner-breeder Robert Hennelly and the nine-year-old did not disappoint.

By King’s Theatre, a highly successful damsire much sought after in pedigrees, the bay is closely related to the Grade 1-placed mare Savitha, also bred by Hennelly and trained for him by Nolan.

Frank Motherway of the renowned nursery Yellowford Farm in east Cork and Donal White, manager of Cork’s leading National Hunt stud Glenview, settled down to duke it out for Solita and it was White, bidding on behalf of Rathbarry and Glenview Studs, who lodged the winning bid of €50,000.

"She is a sweet mare who ticked all the right boxes – she has size, scope and talent," said White, who revealed that Solita will be part of the first book of mares for the farm’s newest recruit, German 2,000 Guineas winner Karpino.

"She looks a nice cover for Karpino and he will inject some speed into the pedigree as a seven furlong and mile winner. Karpino is by Cape Cross out of a sister to Milan and his book for this year will be full."

Solita comes from the family of Oaks winner Love Divine, who is also the dam of St Leger winner and sire Sixties Icon. 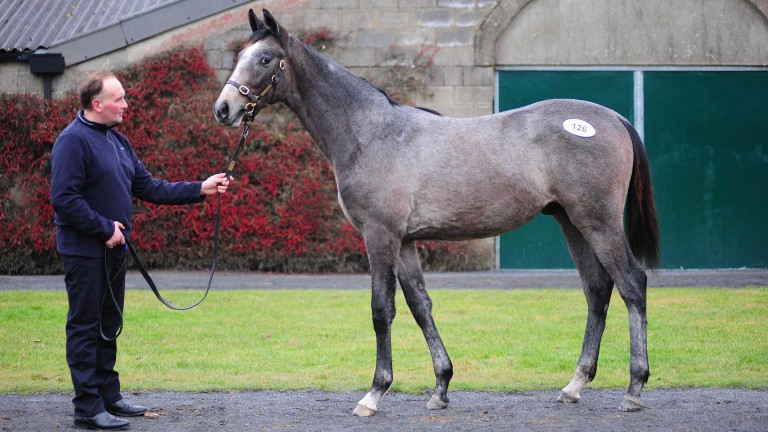 Lot 126: son of Martaline made €56,000 on Tuesday
Tattersalls Ireland/Pat Healy

For much of the afternoon, a colt by Haras du Montaigu’s leading sire Martaline held sway although some late confusion was provided by the mystery surrounding his purchaser. Initially recorded as having been sold to Tom Weston for €56,000, a new name appeared as the sale drew to a close.

It transpired that the colt was knocked down to Weston in error when it should have been recorded as a buy-in and successful pinhooker Richard Frisby negotiated privately with Tom Fennessy of Ballinaroone Stud for the grandson of Linamix, eventually securing his purchase for €47,500.

Consigned by Ballinaroone Stud, the April colt is out of the Poliglote mare Agathe Du Berlais, a half-sister to Agrapart, who won Saturday’s Stayers’ Hurdle trial for Nick Williams and stepdaughter Lizzie Kelly. Agathe Du Berlais is also a half-sister to Nicky Henderson’s Champion Hurdle third Afsoun and their dam Afragha is a half-sister to the dam of the wonderful and popular Balthazar King. It is also the family of Operation Red Dawn, a Grade 3 winner at Belmont Park.

Presenting’s final foals will be born over the coming months and the demise of the brilliant sire of two Gold Cup winners has increased demand for his offspring. Three colts by the late, great Rathbarry Stud sire filled the next three places on the top five list with two selling for €38,000 apiece.

Walshtown Stables consigned a son of Presenting from the family of Champion Chase hero Newmill on behalf of Ringfort View Farm. The fourth foal out of the winning Oscar mare Diklers Oscar, he was purchased by agent Kevin Ross on behalf of an existing client.

“There are not that many Presenting foals left and this colt is a lovely mover. He is a scopey yearling with a nice pedigree and hopefully he will be offered for resale as a store,” Ross said.

Diklers Oscar won two bumpers and two hurdles for trainer Keith Reveley and is a half-sister to Ballcrina Girl, the dam of Crooks Peak, who won the Listed bumper at the Cheltenham November meeting and is entered in the Champion Bumper at the festival for trainer Philip Hobbs.

Another Presenting colt to make €38,000 was Rahinston Farm and Stud’s son of Another Tempest, who is a half-sister to Nigel Twiston-Davies’s Grade 1 Royal & SunAlliance Novices' Hurdle winner Fundamentalist. The bay is her third foal and she has proved a successful broodmare with her first, a three-year-old brother to this colt, making €52,000 at the 2015 November National Hunt Sale, and her second - a Shantou two-year-old colt - selling to Norman Williamson’s Oak Tree Farm for €38,000 at the 2016 November Sale. 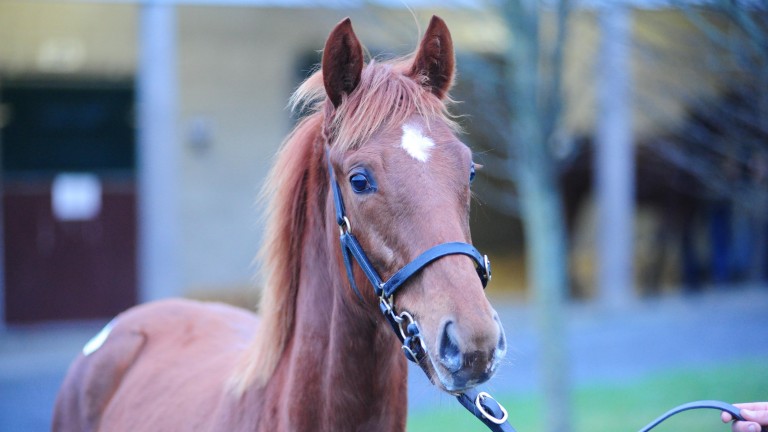 This latest foal was purchased by David Yearsley and is also related to the Grade 1 Challow Novices’ Hurdle winner Barters Hill. His second dam, Run For Shelter, is a Strong Gale sister to the legendary Badsworth Boy, three times victorious in the Champion Chase.

Presenting’s average for four foals sold was €30,500 with three of those selling for above that figure. His third highest-priced foal of the day was consigned by Ballincurrig House Stud and bought by Darragh McDonagh for €32,000.

He is out of the winning Saddler’s Hall mare Saddleeruppat and is a half-brother to the Grade 2 Dovecote Novices’ Hurdle winner Winter Escape. Saddleeruppat is a closely related sister to Jonjo O’Neill’s Grade 1-winning hurdler Black Jack Ketchum and this is also the family of the talented Fota Island and Luska Lad.

The highest-priced filly of the day was a daughter of Flemensfirth who was purchased by point-to-point handler Eamonn Finn for €30,000.

Another to be consigned by Walshstown Stables, the May-born filly is a daughter of Reine Angevine, who was third in the Grade 1 Navan Novice Hurdle for Willie Mullins in 2012.

ITBA Expo showcases the best of the breeding industry