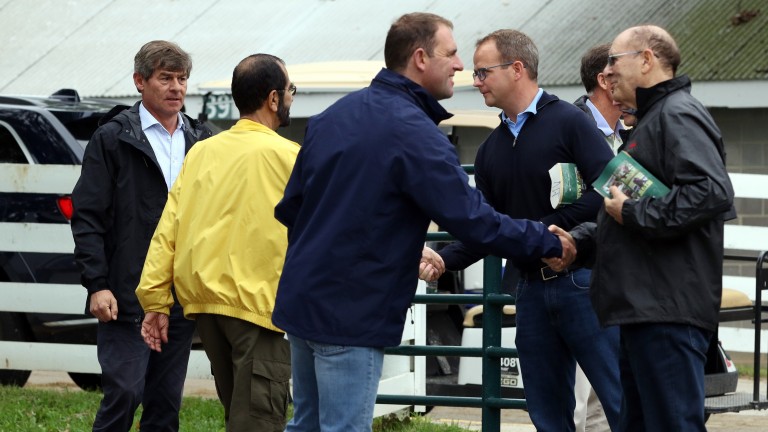 Striding across the back walking ring at Keeneland as horses whinnied and rival buyers scurried aside to let him pass, Sheikh Mohammed stopped, beaming, while flanked by an army of advisers and friends.

“I am very happy,” he declared just after turning back a challenge from Coolmore and securing the session-topping, $2.2 million colt from the first crop of Triple Crown winner American Pharoah as the Keeneland September Yearling Sale opened on Monday for a marathon 13-day run.

Keeneland’s show ring and barns are clearly familiar ground to the sheikh, who has towered over this arena for a much longer span of time than he has ruled the emirate of Dubai.

His electric presence, alongside his wife Princess Haya, gave reason for many breeders and consignors to join him in smiling.

With nine horses purchased for a total of $6.92m, Sheikh Mohammed and his Godolphin cavalry led all buyers, a leadership position he has held 16 times for the entire September venue since 1980. Adding more fuel to the fire were two purchases made in the name of Godolphin Japan for another $360,000.

Following Sheikh Mohammed’s lead, his brother Sheikh Hamdan ranked as second leading buyer, with six yearlings purchased in the initial Keeneland session under the name of his Shadwell Estate for a total of $3.29m.

The Maktoums’ strong bidding stoked memories of many years over four decades when the Dubai royalty, in large measure, kept some breeders solvent, as well as hopes for the final three sessions of the elite-level, four-day Book 1.

“I’m just very grateful that Sheikh Mohammed wanted to buy him,” consignor Peter O’ Callagahan of Woods Edge Farm said about the American Pharoah colt out of stakes winner and multiple Grade 2-placed Kindle, by Indian Charlie. “I knew when he saw [the colt] today, his eyes lit up. I just had a feeling that he was going to try hard to buy him. Who knew that it was going to be at that level?

“It took a monumental effort to outbid Coolmore, I’d say. It’s the perfect scenario for any of us – that’s what we all dream of, that two of the great racing powers get stuck into your horse and go at it. We were just lucky that it happened for us today,” O’Callaghan added.

Although the final price was far less than the Keeneland September sale record of $11.7m that Sheikh Mohammed paid in 2006 when he outbid Coolmore’s John Magnier for the Kingmambo colt later named Meydan City, the scenario was similar. This time Magnier’s son, MV Magnier, was leading the Coolmore team in battling with Sheikh Mohammed’s group.

“We tried,” MV Magnier said, shrugging his shoulders, after the hammer fell.

But even in defeat on that colt, Coolmore was also a winner. The sale proved another significant continuation of the new era that began last year in which Godolphin is actively buying yearlings by the Irish operation’s sires after years of eschewing those horses.

Godolphin also purchased a second yearling from the first crop of American Pharoah, paying $200,000 for a son of Grade 1 winner Joyful Victory, by Tapit.

It was Sheikh Mohammed’s personal presence during the transactions, however, that was the most talked about factor at the sale session. 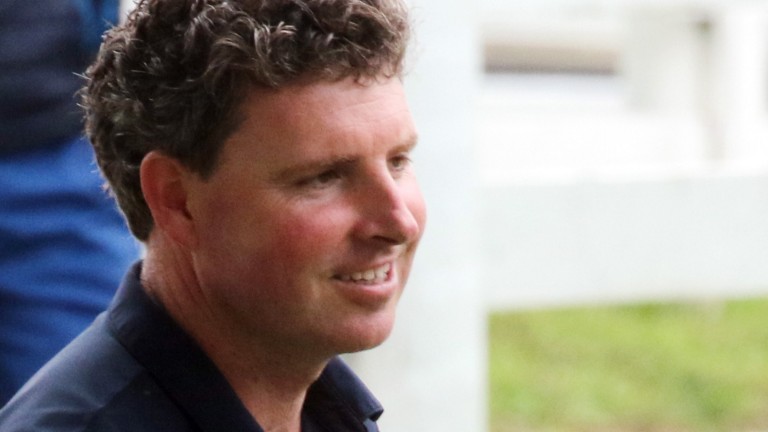 “Absolutely,” O’Callaghan said. “Any time we can have those principals here, be it Sheikh Mohammed or Sheikh Hamdan, it just does everything for the sales. It changes the atmosphere. It just gives all of their advisers more confidence when they pick out the horses they are keen to buy. If Sheikh Mohammed has seen the horse and gives them the okay, it gives them the confidence to go on and buy at a greater level.”

The session-topping American Pharoah colt was purchased by O’Callaghan under the Cavalier Bloodstock name associated with his family’s Yeomanstown Stud in Ireland for $400,000 as a weanling last November at Keeneland. The colt entered the September sale as hip 91.

“We paid an awful lot for him – it’s the most I’ve ever paid for a foal,” O’Callaghan said. “He was exceptional the day we bought him. But he did just continue to get better and better. He was a tremendous physical specimen but his temperament, his demeanour, was almost as big a selling point for him. Every time he would come out there, his ears were pricked and his eyes had the right tone... even if you knew nothing about horses, a horse like that would leave an impression on you.”

Sheikh Mohammed was clearly enthusiastic about the colt while he was accompanied by the new buying team that has coalesced around him since the departure in June 2017 of his longtime bloodstock adviser, John Ferguson.

Trainer John Gosden, Anthony Stroud and David Loder are among those inspecting yearlings at Keeneland, and trainers Saeed bin Suroor and Charlie Appleby were also present during the first session, as was former Godolphin racing manager Simon Crisford.

“He's a beautiful horse by an amazingly talented racehorse," said Gosden of the American Pharoah colt "You could not but like the horse. It’s not easy to breed horses like that."

No decisions have been made at this point about where he will race or who will train the colt, bred by the Texas-based HnR Nothhaft operation of technology entrepreneur Henry 'Hank' Nothhaft, who also races in Britain.

Other yearlings lassoed by the Godolphin squad in the opening September sale session included two colts and a filly by the operation’s hot sire Medaglia D’Oro, led by a $1.3m colt sold as hip 218 who is the first foal of Grade 2 winner Moulin De Mougin and from the family of Eclipse and Juddmonte International winner Roaring Lion.

Another Medaglia D’Oro colt purchase, an $800,000 son of multiple Grade 2 winner Hungry Island and from the family of champion Queena and young sire Verrazano, could be headed to Europe, according to some of the Godolphin team members.

Godolphin also bought a pair of colts by Into Mischief topped by an $875,000 bay out of a half-sister to the dam of Prix de Diane winner Confidential Lady and from the immediate family of Triple Crown winner Affirmed.

Jimmy Bell, who serves as Godolphin’s president in the US, said Sheikh Mohammed will decide on plans for the purchases. He also emphasised how big a role Dubai’s ruler played in buying some of the yearlings, including the $1.3m son of Medaglia D’Oro.

“Sheikh Mohammed loved him from the first time he saw him and followed him up here [to the ring]. He’s happy to have him,” he said.

“He loves the sales,” Bell added of Sheikh Mohammed. “He’s here with his wife and children and having just a great stay. We’re just delighted he’s here and it makes it exciting for everybody.”

“It's an honour for us when Sheikh Mohammed is able to clear his schedule and come here,” he said. “It has been about ten years since he was last here. He has been such a huge supporter of Keeneland and the September sale. To see him on the grounds and participate the way he did today is very rewarding for all of us here at Keeneland.”

Sheikh Mohammed personally attended the September sale in 2009 and in 2007, and ranked as leading buyer both those years. In looking at just the 16 years he has led all purchasers at Keeneland, under the name of John Ferguson Bloodstock or Darley Stud Management, he has directed spending of over $314.7m.