Keeneland WHO'S THE DADDY 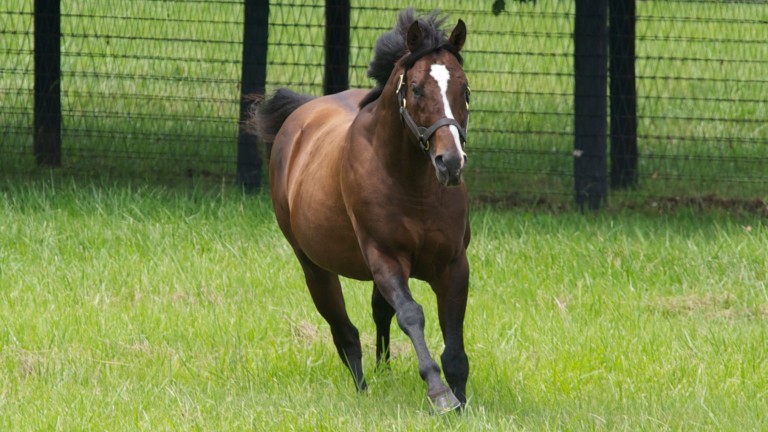 The lights of the electronic board over the Keeneland walking ring were glittering with yet another $1 million transaction during Tuesday’s second session of the September yearling sale, but they were no brighter than the beaming smile on Joseph Allen’s face.

For Allen, who bred, raced and still owns 30 per cent of the stallion War Front, the day in which that sire dominated the bidding with three seven-figure offspring – including the most expensive yearling sold in the world to date this year – will be one to long remember.

“He’s the franchise!” exclaimed Allen when asked what War Front means to him.

Allen had just watched a War Front colt he co-bred with Vincent Viola’s St Elias Stable sell for $1.2m to Sheikh Hamdan’s Shadwell operation and he was naturally jubilant.

The 77-year-old owner and breeder, who has been active in Europe and America since earning his first racing victory in 1975, is quick to proclaim that War Front is “the greatest thing that ever happened to me".

“I got lucky. I got very, very lucky,” Allen said when asked how he came to breed War Front, a son of Danzig and his stakes-winning Rubiano mare Starry Dreamer who was foaled in 2002.

“I’ve been involved with this sport for a long, long time. A lot of times, when you think you’re very smart and do everything right, it just goes wrong anyway. You’ve got to get really lucky, number one, to get a good racehorse, and number two, if he goes to stud, to have a good stallion.

“To have a special stallion is like catching lightning in a bottle – and I’ve done it,” he reflected, almost disbelievingly, over the din of the auctioneer’s chant at Keeneland.

Now all the world’s most successful owners regularly demonstrate that they want a colt or filly by War Front, who has proven to be one of the few sires who can reliably get top horses on European turf or gritty performers on America’s dirt tracks.

Not everyone can afford a War Front, however.

Coolmore’s MV Magnier had to extend to $2.4m on Tuesday to secure the War Front colt out of Grade 1 winner Streaming, by Smart Strike, offered by Hill ‘n’ Dale Sales Agency as hip 458. That final price is the highest worldwide for an auction yearling in 2018. 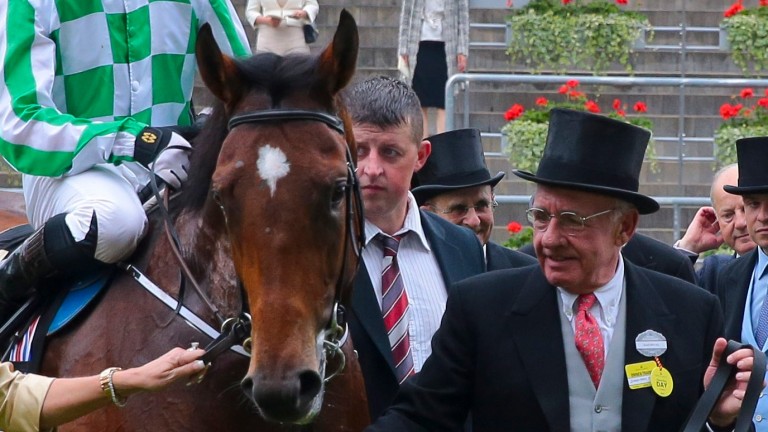 “What can I say about War Front? Over the last number of years, we’ve been exceptionally lucky with the horse,” Magnier said, noting that partners Michael Tabor and Derrick Smith had strong ties to the family of the colt, whose second dam is a half-sister to their American champion filly Rags To Riches.

“It’s a lot of money to pay for a horse but he deserved it. He’s very good looking and let’s hope we made the right decision,” he added.

Godolphin claimed the second-highest priced War Front yearling of the day and the September sale’s highest-priced filly sold so far when going to $1.75m to acquire the elegant half-sister to Kentucky Derby winner Nyquist, who stands at Godolphin’s farm in Lexington.

Trainer John Gosden, who was directing the Godolphin action on the second day of the sale, said the filly bred and consigned by Hinkle Farm as hip 389 “most likely” will go to Europe to race, with a final decision up to Sheikh Mohammed.

“We all liked her, obviously. She’s a stunningly good-looking filly,” Gosden said. “She’s been bought to race and to be a broodmare.”

The War Front colt Allen co-bred who was sold through Gerry Dilger’s Dromoland Farm to Shadwell as hip 291 is the first foal of the stakes-placed Lookin At Lucky mare Pin Up, who is from the family of Irish champions Yesterday and Quarter Moon.

“I loved him,” Allen declared of the colt. “But he was half mine, so how could I not love him?

“We knew he would go for a lot of money. He’s a special horse – he’s just got it all. You don’t get many like that. That’s like hitting the jackpot at the sale,” he added.

Allen also is the breeder or co-breeder of several other horses sold at Keeneland, including:

To make the most of his 30 per cent interest in War Front, Allen maintains a broodmare band of around 20 mares and also breeds occasionally to other leading stallions.

He said Claiborne Farm, where War Front stands, and Coolmore are the other significant owners of War Front, with about a dozen other shareholders also involved.

“I will tell you that he is standing at the right farm,” Allen said, stressing that Claiborne’s decision to limit War Front’s annual books is in the best interest of the stallion as well as his owners. In these days, when some stallions cover over 200 mares a season, War Front served 106 in 2017.

“Seth Hancock has done not a good job, but a great job in managing this horse. He’s done it the old-fashioned way,” Allen said. “There have been a lot of opportunities to get a lot of cash out of War Front and Seth kind of backed off and looked after the horse first. I’m 100 per cent behind him.”

While Magnier said he did not want to talk specifically about how many shares Coolmore owns in War Front, he did confirm that there are several while noting that “War Front is a very important sire.”

Much like Allen does, Coolmore and their partners and Claiborne also mate outstanding mares to the stallion and offer some of the offspring at auction. As often demonstrated, Coolmore seeks out the best of other top progeny of War Front to come to market.

Claiborne sold a homebred filly who is a sister to Coolmore’s Group 1-placed stakes winner Whitecliffsofdover to Shadwell for $950,000 during Tuesday’s session at Keeneland. That filly is out of the mare Orate, a full-sister to the late sire Pulpit.

Also during Tuesday's session, the Coolmore-affiliated Orpendale offered a War Front filly who is a half-sister to Group 1 winners Eishin Apollon and Master Of Hounds as hip 405 through Denali Stud, and she was listed as sold for $750,000 to Northshore Bloodstock, agent.

A War Front colt bred by Orpendale, Chelston & Wynatt and consigned through Gainesway as hip 371 was purchased by Gatewood Bell’s Cromwell Bloodstock for $500,000. That colt is a brother to Naval Intelligence, winner of the Sir Henry Cecil Stakes at Newmarket in July.

With those sales on the books, it’s no surprise that War Front is currently the top sire by average price at the Keeneland September sale. His 11 offspring sold in the first two sessions have garnered a total of $9.67m for an average of $879,091.

Allen, who worked with his cousin Peter Brant in developing a newsprint production company and who currently owns some racehorses in partnership with Brant’s White Birch Farm, said War Front is “like his father, Danzig” in his ability to pass along exceptional racing potential.

“He looks like Danzig, only his legs are better,” Allen noted.

Currently, Allen has around 15 horses in training, including one in Europe, USS Michigan, a two-year-old War Front colt he bred from the Unbridled’s Song mare Photograph, who is from the family of another great Allen-bred sire, Dynaformer. Allen races USS Michigan in partnership with Coolmore and the colt, who finished second on his only start to date, is trained by Aidan O’Brien.

“We think he's a nice colt,” said Allen, who was accompanied by his wife, Annette, at the sale before taking a moment to express gratitude for all he has experienced in racing.

“The one thing I can tell you is that I appreciate how lucky I am,” said Allen, who plans to try to increase his equine holdings by buying some yearlings at Keeneland.

“War Front pays for a lot of mistakes,” he added while intently watching the sale action, “and I love this stuff. It’s all so fun.”

From celluloid to sales for first-time Keeneland buyer Yamamoto

'The buyers had their piggy banks open, and it was quite a show'

Hinkle in heaven as he sells Nyquist half-sister to Godolphin for $1.75m

FIRST PUBLISHED 3:28PM, SEP 12 2018
There have been a lot of opportunities to get a lot of cash out of War Front and Seth kind of backed off and looked after the horse first