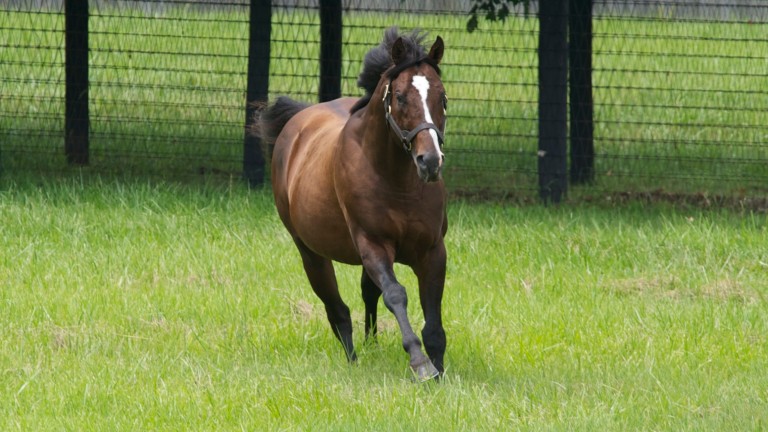 A son of War Front topped the third session of the Ocala Breeders' Sales April two-year-olds in training sale on Thursday when Katsumi Yoshida paid $725,000 for the colt named Battle Of Algiers.

Bred in Kentucky by Lofts Hall Stud, the colt was consigned by Niall Brennan Stables and worked in :21 1/5 during the under tack show.

"We have been trying for awhile to get a good War Front colt and they are not so easy to get, so we are very happy to get this one," said Emmanuel de Seroux of Narvick International, who purchased the colt as agent on behalf of Yoshida.

"This one is a very nice type, he breezed well, and has a turf pedigree, which is a plus for Japan. He is everything we were looking for. And, he has a stallion's pedigree if he's any good."

Off the Hook's strategy of offering primarily homebreds at t-year-olds in training sales paid off handsomely during the third session on Thursday where a Giant's Causeway colt in its consignment brought $625,000.

"Out of the 35 we'll sell, 25 are homebreds," said Joe Appelbaum, a principal in the breeding, training, and pinhooking venture with trainer/principal Carlos Morales.

"It is something we really believe in. (The homebreds) are our clients' and ours. It has allowed us to keep our hands on the horses for longer ... so you can monitor the horse's development over a multi-year period. We think that has been beneficial."

The bay Giant's Causeway colt, bred by Carlos Silvas' Haras Los Samanes, out of the Mineshaft mare My Special Secret, is proof.

Amer Abdulaziz bought the colt for his Phoenix Thoroughbreds, an international Thoroughbred investment fund designed to compete on the highest level.

"He was a beautiful horse," Abdulaziz said. "We liked his breeze—really, everything about him. He's athletic. Giant's Causeway was a great horse (and) a great sire. We are happy to have one of his last.

"I always loved Giant's Causeway as a racehorse and will always remember him losing in the Breeders' Cup to Tiznow . It was an amazing race. You didn't think he would lose."

Abdulaziz said no decisions have been made on which trainer will get the colt.

Two other horses have been purchased by Phoenix at the OBS sale so far—Hip 529, a $290,000 colt by Trappe Shot out of the Dixie Union winner Julie From Dixie consigned by Top Line Sales; and Hip 647, a $55,000 colt by Cairo Prince out of In Excess daughter May Fine, a sister to Grade 1 winner Romance Is Diane and Grade 2 winner Romanceishope. The latter colt was consigned by Niall Brennan Stables.

Morales, a leading trainer in Venezuela before he relocated to the US and campaigned Grade 1 winner Yankee Victor, said the Giant's Causeway colt was a standout as soon as he arrived at the Nelson Jones Training Center near Ocala.

"He looked good out here and never got tired," Morales said, pointing over his shoulder to the OBS training track. "He looks like he can run the whole day. He breezed against a 19 mph headwind. It was crazy for him, but he didn't even care. He kept trying." The colt worked in :10 2/5 during the under tack show.

Appelbaum said he recognises pointing homebreds for the two-year-old market may be a bit tougher on breeders, but he believes this approach offers a more consistent maximum return.

"It is a little different model. It is not the classic model, and to be honest we copied Ocala Stud a little bit," he said. "But it keeps our cost of acquisition down, and the current market trend is that people want a little more assurance their horse will get to the races. If a horse breezes well here, it is more likely to do well on the track."

Everyone who spent any time around the second foal produced by stakes-placed Minesave knew without a doubt the chestnut daughter of Candy Ride was special.

The filly bred in Kentucky by WinStar Farm stirred imaginations on Thursday April 26 when she became the highest-priced filly to sell on day three, selling for $650,000 to bloodstock agent Mike Ryan on behalf of Minnesota owner Jeff Drown.

"She was exceptional," said Ryan. "I saw her the week before the breeze show looking around the barns, and she knocked me out then. I was hoping she might breeze a little slow. No disrespect to the consignors or the owners, but I knew when she breezed as well as she did (:21 1/5) that it was going to be a battle, and it was."

"She looks like a filly that will run this summer at Saratoga, and she's bred to get two turns," Ryan continued. "You don't get many like this. Obviously, she was an expensive yearling. I give credit to those people because they bought an exceptional filly, and she showed it out here."

Ryan said the filly will be sent to trainer Chad Brown in New York.

Rick Kanter's Stallionaire Enterprises bought the filly as a yearling for $270,000 at the 2017 Keeneland September Sale out of the Select Sales consignment. Kanter sent the filly to Brandon and Ali Rice's RiceHorse Stable to be broken and trained for the two-year-old market.

"Whether you are racing her or selling her, she's a winner," said Brandon Rice, a third-generation Florida horseman. "We liked her from the moment she arrived at the farm as far as her looks and her attitude."

Ali Rice broke the filly and was in the saddle for her under tack show performance.

"She has the stride, the stamina, and the mental tenacity to handle the pressures of the game," she said. "Since about Christmas when we start to let them open up their strides a little bit with those two-minute licks, her ability on the racetrack really shone through. We knew she was a serious racing prospect and knew she would be a star."

Drown has been breeding and racing for several years, but he is now ratcheting up the quality of his stock, according to Ryan.

"He said to me, 'Find me something really good that you think is stakes quality, New York stakes quality,'" said Ryan. "The Malibu Moon filly (Hip 534) yesterday afternoon that made $700,000, it was a flip of a coin which one you were going to go for because they were both exceptional. We were pretty close on price."

"Brandon and Ali did a great job with the filly. I love their program," Farrell said. "They keep the horses out during the winter without shoes, they take their time, and raise them to be racehorses. I want a good horse, but I also want a racehorse."

FIRST PUBLISHED 2:23PM, APR 27 2018
We have been trying for awhile to get a good War Front colt and they are not so easy to get, so we are very happy to get this one