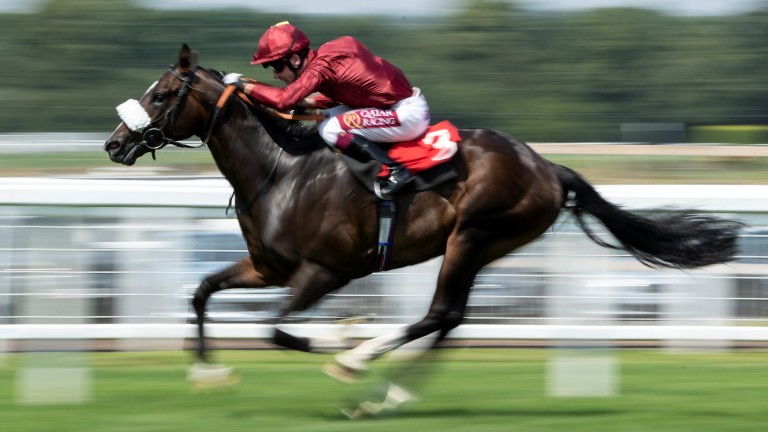 Kameko: kept up a relentless gallop towards the line in the Vertem Futurity
Edward Whitaker
1 of 1
By Ollie O'Donoghue 7:23PM, NOV 1 2019

Previously described by David Redvers as "the steal" of last year's Keeneland September Yearling Sale, Kameko went some way to justifying that high appraisal when running out a clear-cut winner of the Vertem Futurity at Newcastle on Friday, having been sourced for just $90,000.

In a wall of three behind him were the Galileo trio of Innisfree, Year Of The Tiger and Mogul, who were bidding to give their sire an 84th top-flight winner worldwide, the same as record holder Danehill.

Kameko is the 14th top-flight winner for his champion US turf sire Kitten's Joy and the second of the sire's elite winners to carry the Qatar Racing colours after the late, much-lamented Roaring Lion, who was only just denied by Saxon Warrior in the 2017 renewal.

Bred by Calumet Farm, Kameko is out of the Grade 3-winning miler Sweeter Still, a Rock Of Gibraltar half-sister to the 2012 winner of the race, Kingsbarns, and also the Derrinstown Stud 1,000 Guineas Trial winner Belle Artiste.

That quartet were bred by Annemarie O'Brien out of the Belmez mare Beltisaal and all achieved a Racing Post Rating of over 100 or more.

Kameko was purchased by Redvers for $90,000 from Paramount Sales at Keeneland last September, while Roaring Lion was also sourced cheaply for $160,000 from Taylor Made Sales Agency at the same auction in 2016.

Redvers told the Racing Post after purchasing Kameko: "We got the Kitten's Joy colt [Kameko] very reasonably; he's out of a very good racemare who has not proven a very successful broodmare to date. But he was very much what I like - he's very much the sort of Kitten's Joy I'm looking for.

"He'd great movement and strength and was a very correct horse as well. We obviously think the stallion is well above average, and if he's nicked well with the mare, which he could easily have done, we could have got the steal of the sale."

Sheikh Fahad hoping he has unearthed next Kitten's Joy 'steal'

FIRST PUBLISHED 7:23PM, NOV 1 2019
We got the Kitten's Joy very reasonably; he's out of a very good racemare who has not proven a very successful broodmare to date