Justify's breeders in town on the hunt for Juddmonte jewels

James Thomas reports from the penultimate session at Park Paddocks 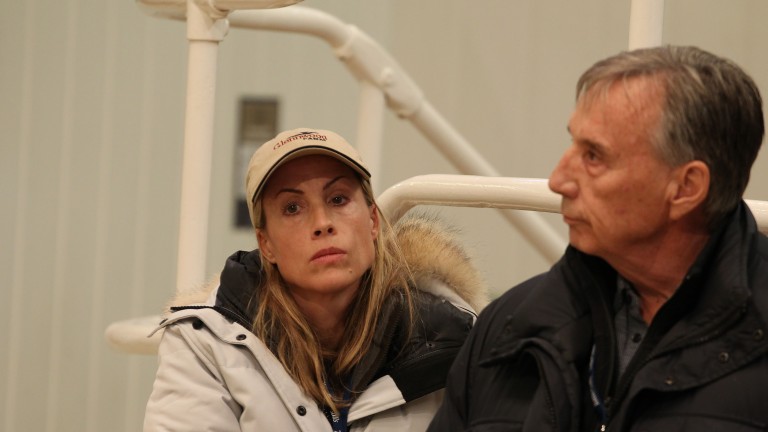 After a breathless headline session the previous day, trade dropped down a gear or two for the penultimate installment of the Tattersalls December Mares Sale on Wednesday, where top-lot honours were shared by a pair of 400,000gns fillies offered by Juddmonte Farms.

Despite prices being a level below Tuesday's session, which was topped by the 2,400,000gns Pearling, dreams of future glory continued to fuel trade at Tattersalls.

John and Tanya Gunther of Glennwood Farm in Kentucky know better than most the power of such dreams, as theirs became reality this year when they were represented not only by Triple Crown hero Justify, but Royal Ascot scorer Without Parole too.

The father-daughter duo made an eyecatching addition to their boutique broodmare band during Wednesday's session when they secured Weekday, a daughter of Dansili and Falmouth Stakes heroine Timepiece at a cost of 400,000gns.

"This is a lovely mare out of a great Juddmonte family," said John Gunther of the youngster, whose page includes talents like Time Test and Twice Over. "Her dam has a couple of Dubawis coming up who could add a lot to the pedigree, that was quite important to me.

"I've been very lucky doing business with Juddmonte; I bred to Frankel and got Without Parole, who won the St James's Palace. They're such great breeders and I just couldn't leave town without getting a Juddmonte mare."

Weekday will remain in Britain and join the Gunthers' select band of mares at Newsells Park Stud. While mating plans are still to be finalised, one up-and-comer seemed at the forefront of Gunther's mind.

"We've got some options with who we breed her to," he said. "I'd like to breed to Kingman and think that would be a good mating - I like that cross." 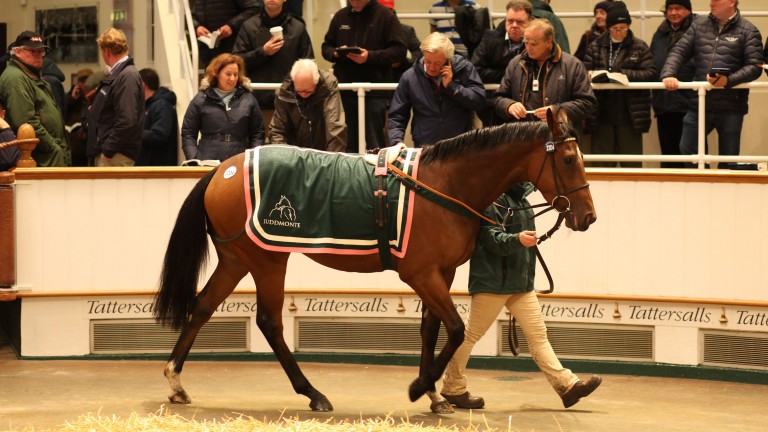 Weekday in the Tattersalls ring before being knocked down to Tanya Gunther at 400,000gns
Laura Green
Gunther went on to reflect on a memorable season on both sides of the Atlantic, saying: "It's been a very exciting year. Winning the Triple Crown is something you dream about when you go to bed at night, and now it's happened it's just beyond imagination. It still hasn't really sunk in yet.

"Then we had our first runner at Royal Ascot with Without Parole - when he won the St James's Palace Stakes I thought I was in a dream! To top it all off Prince Harry and Meghan Markle made the presentation and meeting them was unbelievable - that had to be the best day of my life."

The Gunthers have also enjoyed their share of sales ring success this year, including when selling a Galileo yearling colt out of Posset - another acquisition from Juddmonte - to Stroud Coleman Bloodstock for 1,100,000gns during Book 1.

"I bought Posset when I last stood in this spot so I just couldn't stop bidding!" joked Gunther.

The first lot to fetch 400,000gns was Supporter, who was knocked down to Roger Varian on behalf of Nurlan Bizakov's Hesmonds Stud. The three-year-old daughter of Dubawi is out of the Empire Maker mare Very Good News, making her a half-sister to the smart Frankel colt Weekender. In turn Very Good News is out of the blue hen Hasili.

"Nurlan Bizakov is building a strong band of broodmares," said Varian. "He's had a good year and has some nice fillies in training, but he's always looking to add strong blood to the farm and she fits perfectly."

The owner's pale blue and yellow silks have quickly become a regular fixture on racecourses up and down Britain, and have been carried to noteworthy successes by the likes of Chartwell Fillies' Stakes scorer Tomyris and Listed winner Qazyna.

"Hesmonds have some nice stock coming through and they're starting to get great results," added Varian.

"He has Qazyna, she won a Listed race on her most recent start, she stays in training and is a big girl so should improve next year. I've trained three novice winners who look like being above average too, Tauteke, Nausha and Lastochka. Hopefully one or two of those can prove good enough to run in the Classics."

US-based agent Justin Casse was also among those to dip into the Juddmonte draft, and came away with At Your Pleasure on behalf of Haras d'Etreham at a cost of 175,000gns.

The three-year-old is a daughter of War Front and Ventura, who began her career for Amanda Perrett before switching to the US where she won four Grade 1s. At Your Pleasure ran three times for Andre Fabre, winning a Deauville maiden on debut at two. 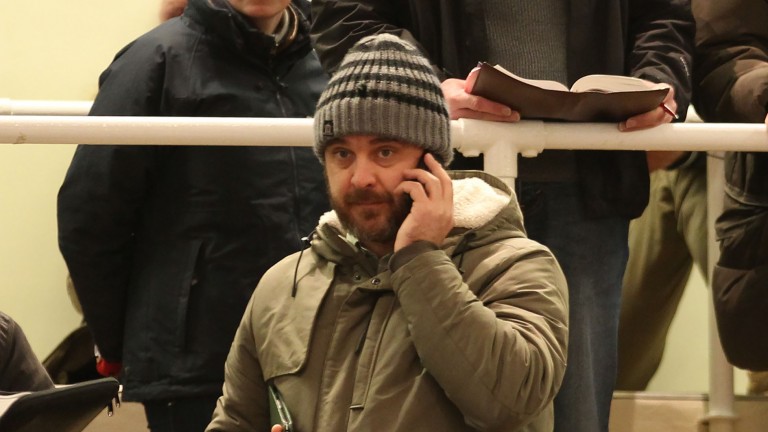 Among the six six-figure lots to come from the ever-popular Juddmonte draft was Rekindle, who went the way of Rabbah Bloodstock's Jono Mills for 170,000gns.

The unraced Frankel three-year-old is out of the Nell Gwyn Stakes winner Hot Snap, a Pivotal half-sister to prolific Group 1 winner Midday, while further back this is the same family as Reams Of Verse and Elmaamul.

The family has plenty still in the pipeline, as Rekindle has a two-year-old full-brother named Home Fire and a closely related foal sister by Galileo.

"She's a very nice filly and has a lovely page to get into," said Mills. "We'll be hoping for a few updates now and maybe a bit more black type under the first dam, I'm told her Galileo and Frankel are both very nice. She's got a cracking pedigree and it can only go one way.

"We've bought her to be a broodmare but we're not sure where we'll go with her yet."

Juddmonte sold 35 lots at this year's December Mares Sale for receipts totalling 3,753,000gns. Their offering was headed by Aurora Gold, who topped Monday's session when selling to Bertrand Le Metayer Bloodstock for 550,000gns.

One more for Watson

Archie Watson has enjoyed a fruitful 2018 campaign, having saddled a maiden century of winners in only his second full season with a licence. He can now look forward to preparing Vivianite, after Blandford Bloodstock's Tom Biggs outbid Joe Miller of Kern Thoroughbreds at 160,000gns for the daughter of Teofilo.

"She'll go to Archie Watson for an existing client," said Biggs. "We'll give her a break and freshen her up with a view to a four-year-old campaign."

Vivianite, bred and raced by Ballygallon Stud and trained by Mick Halford, boasts a similar profile to so many of Watson's success stories. She won one of her 11 starts and has some solid form behind her, having finished a close-up fourth behind Sarrocchi in the Listed Garnet Stakes on her latest outing.

Watson's hot spell continued on Wednesday as he fired in an across-the-card double through Lingfield winner Mango Tango and Kempton scorer Beleaguerment, both of whom were making their stable debut.

The high point of the early stages of Wednesday's session came when David Redvers strode into the Park Paddocks gangway and delivered a bid of 125,000gns to secure Roedean, an Oratorio half-sister to Fred Darling and Princess Margaret Stakes winner Maureen, offered in foal to Kingman.

The nine-year-old boasts a long sales history, having been through the ring on five previous occasions. Before Wednesday her most recent visit to Tattersalls saw her head to Saudi Arabia, having been bought by Khalid Mishref for 85,000gns in 2014.

"She's closely related to horses we own: the Galileo yearling out of Maureen goes to William Haggas - she's absolutely lovely - and Lady Dragon is further down the page. It's a lively family."

With Tweenhills Farm and Stud hosting a burgeoning stallion roster, Redvers said Roedean would be covered once she delivers her Kingman foal, but added no decision had been made as to who exactly she would visit.

"I'm buying high-quality mares to maximise the opportunity presented by standing horses like Zoustar, Lightning Spear and the big horse, Roaring Lion," he added. "She fits the bill perfectly. Our best two-year-old is by Kingman [Sparkle Roll] so it's safe to say I'm very excited by him. Roedean is owned by myself and Hannah Wall at the moment."

The Tattersalls December Mares Sale concludes on Thursday, with a session beginning at 9.30.

In pictures: the bloodstock world's major players descend on Tattersalls

FIRST PUBLISHED 8:12PM, DEC 5 2018
I bought Posset when I last stood in this spot so I just couldn't stop bidding!