By Frankel out of Midday, Mori is the daughter of two champions 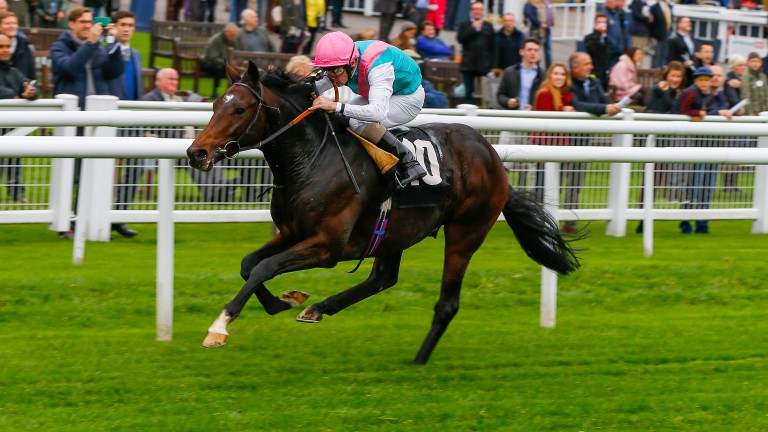 Midterm made an impressive start to his career at Newbury where his dam's second foal makes her debut on Friday
Mark Cranham
1 of 1
By Chris McGrath 3:10PM, APR 20 2017

The Friday of the Greenham meeting has always been a favourite of aficionados and the card once again introduces a number of youngsters with royal pedigrees.

Given the qualities stipulated for his first book of mares, it seems almost inevitable that these include the latest newcomers by Frankel, whose first crop of three-year-olds has made such a good start in consolidating the impression made by his more precocious stock last year. These include the daughter of the very first mare sent to Juddmonte's world champion.

For the homebred Mori, who makes her debut in the Bathwick Tyres Fillies' Maiden over ten furlongs at 3.40pm, is result of Frankel's debut cover in 2013, six-time Group 1 winner Midday. Mori is trained by Sir Michael Stoute, who came to Newbury to get Midday's first foal - one-time Derby favourite Midterm, by Frankel's sire Galileo - up and running with a debut success and brings him back for a first appearance of his third campaign on Saturday's card. Midday herself is out of a half-sister to Oaks winner Reams Of Verse and Eclipse winner Elmaamul.

Mori's rivals include Nafaayes, by Sea The Stars out of an unraced sister to 2,000 Guineas winner Haafhd - their dam, in turn, being one of the great Shadwell performers and producers in Al Bahathri. Trained by Charles Hills, she looks qualified for a role in the Shadwell broodmare band however her career unfolds on the track.

Frankel's other debutante on the card is Omneeya, trained for her breeder Sheikh Mohammed bin Khalifa al Maktoum by Marco Botti. She is the first foal of Amanee, an Australian-bred daughter of Pivotal who won at Grade 1 level in South Africa as a juvenile. Amanee represents a superb Niarchos family, as a half-sister to the dam of Breeders' Cup Miler winner Karakontie, and a grand-daughter of the great Miesque. As a half-sister to Kingmambo and East Of The Moon, Amanee's dam Moon Is Up scarcely needed her own Listed success to warrant a tag of 450,000gns at Tattersalls December in 2006.

Omneeya makes her debut in the first division of the Bridget Fillies' Maiden at 5.10pm, where Hills again saddles a Shadwell blueblood in Mulhimatty. The Invincible Spirit filly is the first foal of a stakes-placed half-sister by Pivotal to the champion sprinter and young sire Muhaarar.

Their opponents include a filly in the shop window in Superioritycomplex, a Hard Spun half-sister to the highly progressive Abingdon out of Islington's close relative Justlookdontouch. She is due to be part of the historic Ballymacoll dispersal scheduled for Tattersalls later this year.

FIRST PUBLISHED 3:09PM, APR 20 2017
Her rivals include Nafaayes, out of an unraced sister to 2,000 Guineas winner Haafhd - their dam, in turn, being the Shadwell great Al Bahathri