Frankella, by Frankel and out of Arabian Queen, set for her debut at Salisbury 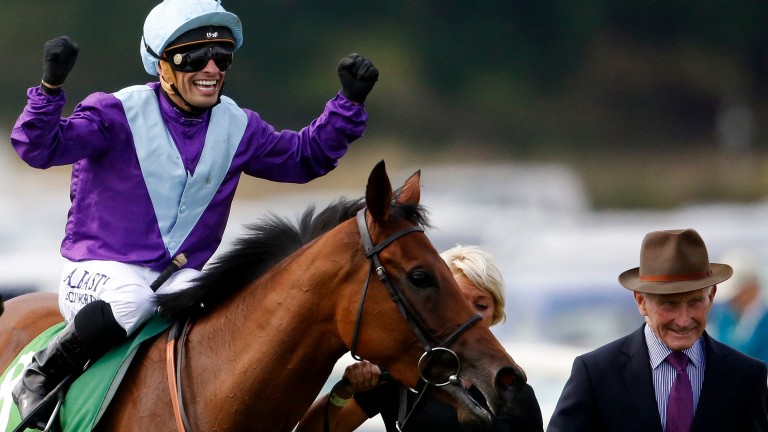 With a name like Frankella, you might not need more than one guess to name the sire, but with a dam who like Frankel won the Juddmonte International, the juvenile filly will certainly have plenty of eyes on her at Salisbury on Sunday.

Jeff Smith’s homebred Frankella is set to make her debut in the 6f novice stakes (3.08) sponsored by Byerly Stud and which remembers Peter and Virginia Walwyn, and it’s an intriguing-looking race too, with eight of the nine declared set to have their first run.

Frankella does rather stand out, however, as a daughter of recent Derby-winning sire Frankel, whose victory in the Juddmonte International came in 2012. Arabian Queen, meanwhile, the dam of Frankella, won York’s premier race in 2015. Their SPs were rather contrasting, Frankel being sent off at 1-10, and Arabian Queen at 50s.

Their daughter represents the Andrew Balding yard, with Oisin Murphy in the saddle, and also many hopes and dreams as she sets out on her career. She’s certainly bred for stardom but this is a tricky looking affair and there will be plenty of other newcomers with support.

At Doncaster, it’s yet another Juddmonte International hero, Sea The Stars, who won the race in 2009, who looms large as the sire of two expensive Godolphin debutants.

First up is Private Signal, who faces eight rivals, several of whom are also newcomers, in the 7f maiden (2.15).

Out of Redoute’s Choice mare Smoulder, who is closely related to Group 1 winner Legatissimo, the two-year-old colt was bred in partnership between Lordship Stud and the Tsui family’s Sunderland Holding, and Godolphin had to go to 680,000gns to secure him at Book 1 of the Tattersalls October Sale last year.

Half an hour later, in the mile maiden (2.45), Charlie Appleby and William Buick team up once more, this time with Sea The Stars’ already gelded three-year-old son Neptune Seas, who cost even more at the same sale a year earlier, at 725,000gns.

Bred by John Heffernan out of Danehill Dancer mare Emreliya, the gelding is a half-brother to three winners. His dam is an unraced granddaughter of Irish Oaks and Prix Royal-Oak heroine Ebadiyla.

Ten are set to be in opposition, a fair few of them with experience. Among them is Nathaniel’s son Line Of Descent, who could prove the one to beat having finished a fair third at the same track on his debut on the opening day of the Flat season in late March. He too is already a gelding.

FIRST PUBLISHED 2:02PM, JUN 12 2021
At Doncaster, it’s yet another Juddmonte International hero, Sea The Stars, who looms large as the sire of two expensive Godolphin debutants