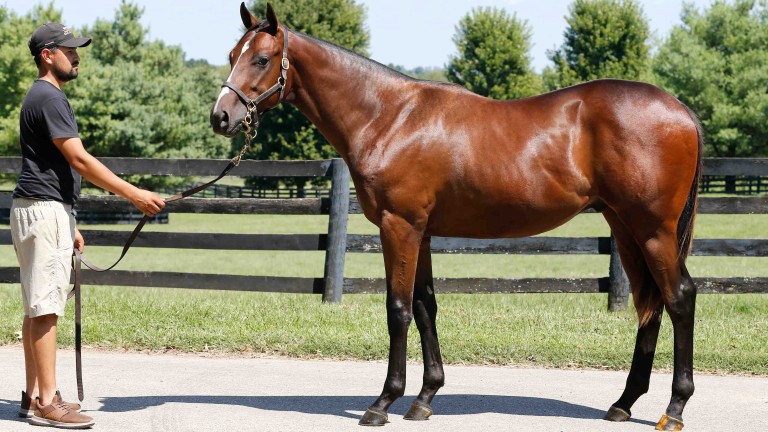 Even though he will be sending a yearling with one of the world’s most enviable pedigrees into the Keeneland September sale ring, breeder John Gunther does not expect to feel any jangling nerves.

The Canadian, who breeds and races in Europe and the US and who was honoured with the 2018 Eclipse Award as America’s outstanding breeder, is preparing to test the market with a half-brother to Triple Crown winner Justify during the opening session on Monday.

Standing outside Barn 14, where the colt was being shown as hip 106 to a steady stream of high-profile buyers over the weekend, Gunther said he will be pleased with whatever happens in the ring.

The colt by Pioneerof The Nile - the sire of another Triple Crown winner, American Pharoah - is such a high-quality individual that Gunther believes he will appeal to many buyers. However, he would also be happy to take him back home.

“He’s got a really good mind and he looks racy, so we’re quite excited about him. We’ll see what happens,” said Gunther, who owns Glennwood Farm in Versailles, Kentucky. “He’s got a good walk and I think he’ll go over very well.”

The close Triple Crown connections on both the top and bottom of the colt’s pedigree “makes it real interesting,” he added with a smile. “It’s got to wake people up. I’m hoping it will, anyway.

“You always get a bit nervous because you never really know what fate is going to deliver, but I’m not really nervous about him. We like him so much that we’re not concerned about racing him. So, if he doesn’t meet the reserve, we’re happy to race him."

A handsome bay with a narrow stripe, the colt is medium-sized and balanced, a handier type than either Justify or another half brother that Glennwood offered at the 2018 Keeneland September sale.

With the 2018 yearling, a blaze-faced chestnut by Will Take Charge, Gunther jovially said that, in hindsight, “I probably got a bit carried away” when the colt did not attain his reserve at $1.75 million.

Since last year’s September sale came just three months after Justify, the son of Scat Daddy who was raised at Glennwood and sold as a yearling at Keeneland for $500,000, had swept through the Triple Crown to become only the 13th winner of the American Classic series and only the second undefeated winner, Gunther conceded “there was a lot of hype” that was intoxicating.

Yet in some ways, Gunther is even more buoyant about the Pioneerof The Nile colt.

“This one, I’m more excited about him - his whole demeanour and everything. He looks racier and quicker. I think he will come to hand a lot earlier than Justify or the [Will Take Charge] half-brother,” he said.

Now named One More City, the Will Take Charge colt is currently in pre-training but hasn’t been assigned to a racetrack trainer, according to Gunther’s daughter, Tanya, who oversees Glennwood and the matings of the farm’s mares and who raced last year's St James’s Palace Stakes winner Without Parole with her father.

“He’s grown a lot. He’s going to be as big as Justify so it’s going to take a lot of time,” said John Gunther of One More City. “I certainly don’t expect to run him as a two-year-old - it will be early in his three-year-old year.

"As far as talent is concerned, it’s just too early to tell. He’s going through these growing stages, so we’ll see what happens.”

Gunther homebred mare Stage Magic, a stakes-placed daughter of Ghostzapper who was herself an RNA [reserve not attained] albeit at the $70,000 level at the 2008 Keeneland September sale, produced Justify, Grade 3 winner The Lieutenant and One More City prior to being named 2018 Broodmare of the Year in Kentucky.

Tanya Gunther said Stage Magic lost her foal this spring, a filly by Quality Road, but is back in foal to Curlin.

Meanwhile, after winning the Eclipse Award, John Gunther indicated that both he and his daughter feel a degree of inspiring pressure to keep the Glennwood breeding programme at the highest level.

“You just keep hoping and trying to get some good results from the breeding,” he said. “I give credit to my daughter - she plans the matings and works 24/7. She never stops working.”

The September sale requires laborious preparations which have been ongoing for months.

“There's a lot of work involved and you’ve got to pass all the veterinary exams and it’s never easy,” Gunther observed before reaffirming his faith in the Pioneerof The Nile colt.

“Whatever turns out with him, I’ll be happy in the end. If we keep him, that’s fine,” he said.