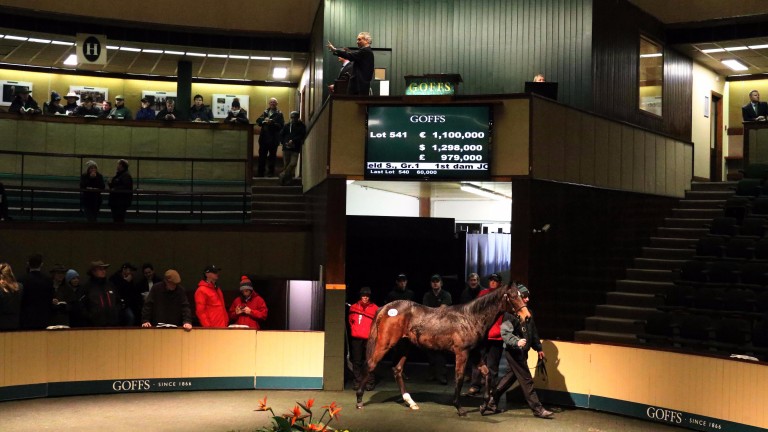 Auctioneer Henry Beeby knocks the Galileo filly out of Inca Princess down to Hugo Lascelles for €1.1 million
Peter Mooney
1 of 1
UPDATED 7:35PM, NOV 24 2017

The million euro barrier was broken for the third time in four years at the Goffs November Foal Sale on Wednesday as a sister to Johannes Vermeer, one of three Galileo foals catalogued for the day, realised €1.1 million to agent Hugo Lascelles.

Her sale completed a competitive first segment of foal trading at Goffs, one that featured seven foals who made in excess of €300,000 compared to four last year. The depth of demand for some of the better lots was also finely illustrated by an average for the day that wound up at €93,697, 20 per cent above last year's corresponding figure.

The draft of Galileo foals, which were offered by The Castlebridge Consignment on behalf of either Desert Star Phoenix Jvc or the partnership between the China Horse Club and Coolmore, were naturally widely expected to take centre stage and indeed the group also included the day’s most expensive colt, a €625,000 youngster out of Group 1 winner Melito. He was knocked down to Ken Bolger as was the third Galileo foal, a filly out of New Zealand champion Fix who cost €400,000.

The sale-topper, however, is set to race in Europe for US interests. Lascelles outbid Dermot Farrington for the filly, who is the fourth foal out of Inca Princess, already the dam of Group 1 winner Johannes Vermeer, who has been placed in the Melbourne Cup, Ladbrokes Stakes and Caulfield Cup since the publication of the catalogue, and Elizabeth Browning, who won the Kilboy Estate Stakes before selling for a sale record of 700,000gns to Alex Elliott at last month's Tattersalls Autumn Horses in Training Sale.

"She's been bought for American interests and will almost certainly be kept to race in England," said Lascelles of the filly, who became the joint second highest foal to sell at Goffs after the Frankel filly out of Finsceal Beo that made €1.8m in 2014.

"The mare's first foal was a Group 1 winner and her second, Elizabeth Browning, won the Kilboy Estate Stakes. So the mare is proven and this is a very, very good looking filly." 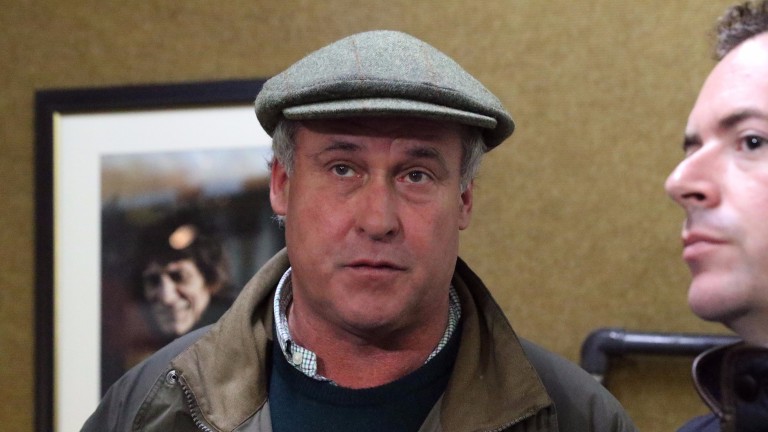 Meanwhile, the Galileo colt out of Melito, a dual Group 1 winner in Australia for trainer Gerald Ryan, looks set for a future with Jim Bolger after selling to his nephew Ken.

"He's a grand colt and obviously we know a lot about Galileo - he's been very lucky for us," said Bolger, alluding to the trainer's early success with the stallion through New Approach and Teofilo among others. "Obviously it's also a good page. We'll bring him back with a view to racing him down the line."

Bolger went on to conclude a successful day by outbidding Tom Goff of Blandford Bloodstock at €400,000 for the filly out of Fix. She is the first foal out of her dam, a relation to Showcasing who won a trio of Group 2 races and ran second in the Group 1 New Zealand Derby in her native land.

Capital Bloodstock looking to the stars

The sale ended on a high when the very last through the ring, a colt by Sea The Stars from Stanley Lodge, made €460,000. He was the fourth high-profile purchase of the day for Capital Bloodstock, which shelled out €1.15 million on stock during Wednesday's session alone.

"He's a very athletic colt with great balance," said Peter Vaughan, standing alongside owner Neil Gilchrist, who signed the ticket. "He also has a lovely pedigree. Like the others, he has been bought to race and will go back to England."

Sold by Stanley Lodge, the chestnut is the second foal out of his winning dam, a half-sister to Group 1 winner I'm Your Man and the Group 1-placed Perfect Hedge.

Sheikh Hamdan's Shadwell Estates were quick to show their support for the first crop of their champion sprinter Muhaarar, going to €340,000 for a colt out of the 2006 Moyglare Stud Stakes winner Miss Beatrix from Ballintougher Stud.

The daughter of Danehill Dancer has already bred three black-type horses from her first five runners for Mags Durkan, among them Jally, who was Group 3-placed for Sheikh Hamdan, and this year's Solario Stakes third Arbalet, himself a €370,000 graduate of the November Sale.

"Sheikh Hamdan has sent between 12 and 14 mares to Muhaarar each season so far," said Derrinstown Stud general manager Stephen Collins after signing the ticket. "He's been keen to support the horse and we really like what we have by him at home.

"We had a good horse, Jally, out of this mare. He was a good, active sort and this guy has great action with presence and scope - he's a lovely athletic foal, one of the best movers on the grounds."

Thawrah the gift that keeps giving

The sale of a Dark Angel colt to Anna Sundstrom and Amy Austin, signing as High Valley Equine, provided yet another fine return for his breeder John McEnery of Rossenarra Stud. McEnery paid 17,000gns for his dam Thawrah back in 2005 and went on to breed the Hackwood Stakes winner Heeraat out of the mare alongside Listed winner Ambiance.

Thawrah has also become a regular hit in the sale ring. Progeny of the mare have made up to 380,000gns in recent years and yesterday that popularity continued when her latest foal, a brother to Heeraat, was knocked down for €340,000.

"I remember I saw Thawrah about four times before I bought her - I'd never done that with a mare before," said McEnery. "It was a fair amount of money for me at the time and not a decision I took lightly.
"She's back in foal to Dark Angel and I also have her daughter Antisari, who is in foal to Dark Angel too."

There was also a happy outcome for the connections of another one-time inexpensive purchase in Gender Dance, whose two-year-old Kings Shield made a striking winning debut at Newcastle last Wednesday. Ballyduane Stud paid just $7,000 for the mare at the Keeneland January Sale last year and reaped a major reward on Wednesday when selling her Gutaifan filly foal for €155,000 to Aidan O’Ryan.

Following a break of two days for the Mares Sale, which starts on Thursday at 10am, the Foal Sale resumes on Saturday.

How we've covered the Goffs November Foal Sale so far:

FIRST PUBLISHED 7:49PM, NOV 22 2017
I remember I saw Thawrah about four times before I bought her - I'd never done that with a mare before