Bloodstock Latest FLAT IS BACK 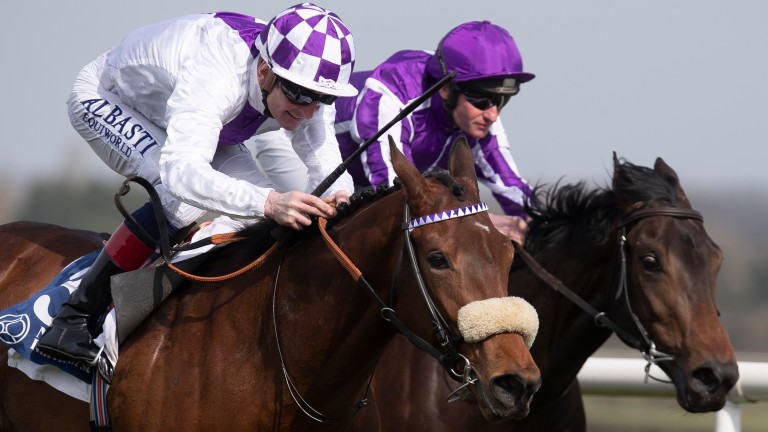 Familiarity is always a comforting theme for Flat fanatics when the action on the turf returns and there was certainly a sense of deja vu in this year's renewal of the Irish Stallion Farms EBF Maiden at Naas.

It was no surprise that the grass curtain-raiser went to Jim Bolger, who is renowned for having his string forward and won the same race when it was at the Curragh between 2011 and 2013.

His middle victory came through Dawn Approach, the powerful chestnut who ended up going unbeaten in six starts as a juvenile stretching through the Coventry, the National Stakes and finally the Dewhurst.

That streaked stretched to seven in the 2,000 Guineas and he has gone on to become a loyal servant for Kildangan Stud.

Bolger had his son Poetic Flare ready to start off in his white and purple ensign and, although not quite as visually impressive as his father had been, there was still plenty to like about the 2-1 joint favourite as he wore down market rival Lipizzaner, an equally promising son of Uncle Mo for the trainer's former protege, Aidan O'Brien.

Dawn Approach won several of the same key juvenile races as Teofilo had managed for the same connections four years earlier. Poetic Flare fits into that family too, as his mother, Maria Lee, is out of a half-sister to the champion two-year-old's dam.

Maria Lee, whose brief racing career was undistinguished, is already turning out to be a more than useful producer as her daughter Glamorous Approach, by Dawn Approach's father New Approach, won two Listed races for the sage of County Carlow.

The Blue Panther, a first ever runner for Dawn Approach's Kildangan stablemate Buratino, fared best of the rest in third.

FIRST PUBLISHED 4:22PM, MAR 23 2020
Although not quite as visually impressive as his father had been, there still was plenty to like about the 2-1 joint favourite