Japanese buyers account for 16.5 per cent of November Sale takings 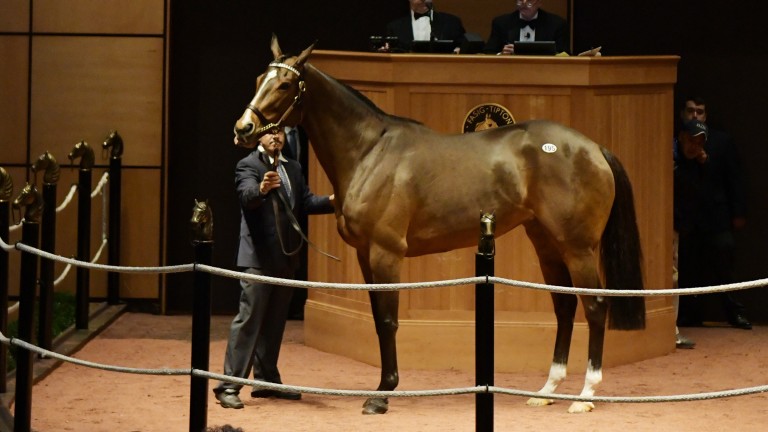 Fourstar Crook: Grade 1 winner in the ring before being knocked down to Katsumi Yoshida
Fasig-Tipton Photo
1 of 1
By Michele MacDonald 4:10PM, NOV 5 2018

Turning out in force, Japanese buyers scooped six Grade 1 winners among the 14 mares and broodmare prospects they purchased during the Fasig-Tipton November sale on Sunday, with eight farms spending a total of $14.81 million, equivalent to 16.5 per cent of the single session sale turnover.

Katsumi Yoshida, owner of Northern Farm, led the way with six purchases that averaged over $1m and that were topped by the back-to-back acquisitions of Grade 1 winners Finley’sluckycharm and Fourstar Crook, both of whom raced in Breeders’ Cup events at the weekend but were unplaced.

Yoshida also bought Grade 2 winner Ivy Bell, a daughter of Archarcharch, for $1m, and both his brothers, Haruya and Teruya, will also be taking some high-profile purchases back to Japan.

Haruya Yoshida, the youngest of the trio that owns the Shadai Stallion Station in addition to their individual farms, paid $2m to acquire A Raving Beauty, the German-bred daughter of Mastercraftsman who won a pair of Grade 1 races prior to a game third-place finish in the Breeders’ Cup Filly & Mare Turf.

The sale generated a big score for the partnership that bought A Raving Beauty from her breeder, Gestut Karlshof, for about $250,000 last year and sent her to Chad Brown. The five-year-old earned nearly $1m in 2018 while winning the Grade 1 Just A Game and First Lady Stakes for Brown.

“It’s been a pretty special year,” said Bradley Weisbord, whose Elite Sales consigned A Raving Beauty for owners Michael Dubb, Madaket Stables and Bethlehem Stables. Weisbord thanked the owners, who he said have supported his sale agency business in addition to buying horses based on his recommendations and those of his European associate, Nicolas de Watrigant of Mandore International Agency.

Bloodstock agent Emmaneul de Seroux, who represented Ito just as he had last year at the Fasig-Tipton November sale when Grand Farm paid $1m for a weanling filly from the first crop of Triple Crown winner American Pharoah, said plans were not yet firm for Caledonia Road.

“We’ll see. She might go back to Japan in foal [to an American-based stallion], but we’re not sure,” de Seroux said, adding that Ito “is trying to get some top-class mares now.”

K I has been actively seeking top young mares in Kentucky in recent years, with Canadian Horses of the Year Lexie Lou and Catch a Glimpse among the farm’s most high-profile acquisitions.

Lexie Lou, a daughter of Sligo Bay who was a $1m purchase, produced a chestnut filly by Frankel in February, according to Japanese Stud Book records.

Catch a Glimpse, a $3m purchase by City Zip, was bought last year at the Fasig-Tipton November sale as a broodmare prospect and thus has not yet produced any foals.