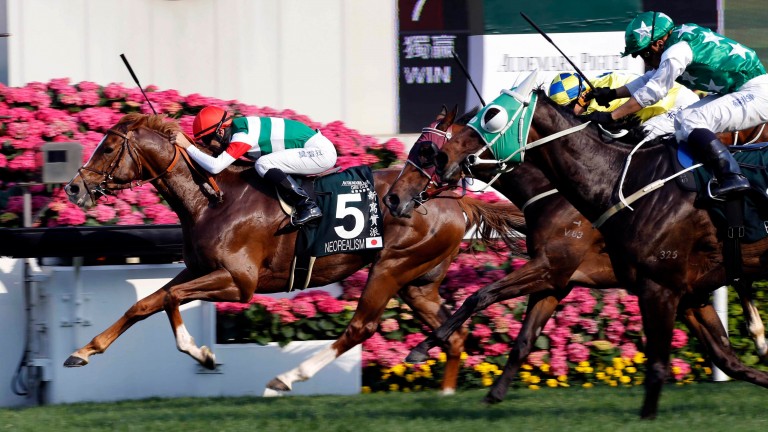 Neorealism runs out a ready winner of the Audemars Piguet QEII Cup
HKJC
1 of 1
By Tim Rowe/ANZ Bloodstock News UPDATED 4:45PM, MAY 13 2019

Japanese-bred and trained Hong Kong Group 1 winner Neorealism will stand at Oaklands Stud in Australia for the upcoming southern hemisphere breeding season in a move that is believed to make him the highest money earner to ever stand in Queensland.

Studmaster Neville Stewart announced yesterday that the eight-year-old son of Neo Universe, twice a Grade 2 winner in his home country before his success in the Queen Elizabeth II Cup at Sha Tin in 2017, would be joining Power on the Oaklands Stud roster.

Neorealism is a three-parts brother to dual hemisphere Group 1-winning stallion Real Impact, a son of Deep Impact who has shuttled to Arrowfield Stud for the past three seasons.

Both Real Impact and Neorealism, as well as two other stakes performers, are from the top-producing Meadowlake mare Tokio Reality.

Stewart believes Neorealism, who won eight of his 23 starts and ¥433,329,668 in prize-money (A$5,659,718) for trainer Noriyuki Hori, offers breeders access to an outcross sire-line that will suit Australia’s colonial pedigrees.

“If you take a leaf out of [Arrowfield Stud’s] John Messara’s book, who is probably one of the smartest breeders in Australia if not the world, he has put a lot of his resources towards the Sunday Silence line including he and John Singleton sending mares to Sunday Silence,” Stewart told ANZ Bloodstock News.

“My son Alistair and I are believers that there is probably a little bit too much colonial blood, two and three generations, and a lot of those horses aren’t training on as three-year-olds because we have consistently bred speed to speed, to speed, to speed.

“I am not saying [Neorealism] will breed stayers - I don’t think that at all - but he is a horse who has the very good Meadowlake influence, which will breed you a lot of speed, and he is a horse I think who will get you quite a handsome two-year-old type who will race early.

“But he will have enough substance in his pedigree to train on as three and four-year-olds.”

He added: “If you were to look at him, you’d say he was a sprinter-miler. He's very powerful behind, he has got a very deep shoulder. He has short canons, which designates speed, he has got good bone but if you stand behind him he is what you’d expect of a sprinter.”

Neorealism, who defeated Pakistan Star and Werther in his Group 1 Hong Kong victory, will stand for A$9,900.

Stewart believes the stallion is competitively priced, allowing breeders enough margin to gain a return in the sales ring as yearlings, particularly those aimed at the Magic Millions Gold Coast March Yearling Sale.

“If you get into Magic Millions 1 to 5, then that is fantastic, but the reality is that they don’t all get in there, whether they are Better Than Readys or Spirit Of Booms, Neorealisms or Powers - and I know that first-hand when I had Iglesia and Lion Hunter,” he said.

“The fallback position has to be your state sale and when you look at the average of the QTIS sale we wanted to ensure we left something in there for everybody else.”

Oaklands Stud and his Japanese breeders have committed to supporting Neorealism throughout his breeding career.

FIRST PUBLISHED 4:26PM, MAY 13 2019
My son Alistair and I are believers that there is probably a little bit too much colonial blood, two and three generations