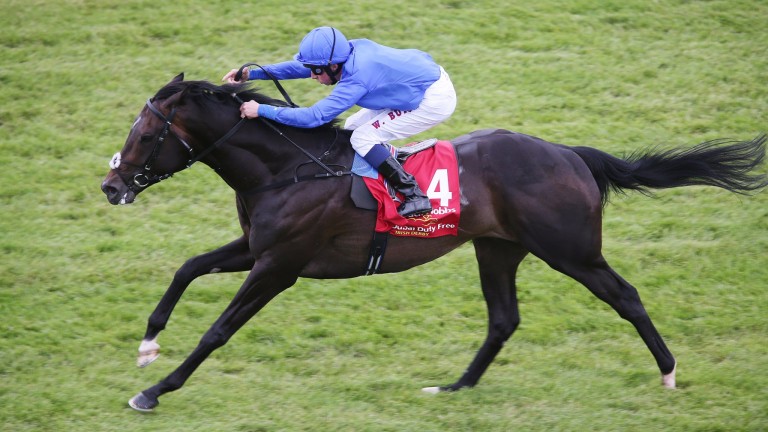 National Hunt breeding in Britain received a boost on Wednesday when Overbury Stud announced the recruitment of 2015 Irish Derby winner Jack Hobbs, who will start his second career at a fee of £4,000.

The five-year-old son of Halling, who remains in the ownership of Godolphin and the partners who raced him, added a second top-level victory to his CV earlier this year in the Dubai Sheema Classic.

Bred by Willie Carson out of the winning Swain mare Swain's Gold, Jack Hobbs was originally purchased for 60,000gns from Book 2 of the Tattersalls October Yearling Sale by Blandford Bloodstock.

Trained by John Gosden, he won his only start as a juvenile and a Sandown handicap on is reappearance by 12 lengths. He then finished second to Golden Horn in both the Dante Stakes and the Derby, before an impressive success in the Irish equivalent.

After warming up with a win in the Group 3 September Stakes, Jack Hobbs finished third in the Qipco Champion Stakes – and did well to fill the same position in the same race 12 months later, having suffered a pelvic injury on his only start in the meantime.

Though unable to build on his Dubai success this year, the arrival of Jack Hobbs represents quite a coup for Overbury in its quest for an eventual heir to its multiple champion sire Kayf Tara, who is now 23. Halling is proving a useful sire of jumps sires, Norse Dancer having supplied Yanworth and Coastal Path having started well in France.

Simon Sweeting, manager of the Gloucestershire farm, said: "I am overjoyed that Jack Hobbs is coming to Overbury. He's a magnificent stamp with an outcross pedigree, and he's the best racehorse to retire straight to the National Hunt ranks in Britain since Sheikh Mohammed sent us Kayf Tara back in 2001."

Gosden, who also trained Halling, added: "Jack Hobbs is a very attractive, rangy colt with a great stride, high cruising speed and a fine turn of foot; a classy individual with a superb combination of speed and stamina."

Stud news in brief: Lanwades and Thenney release fees for 2018

FIRST PUBLISHED 3:14PM, NOV 1 2017
I am overjoyed that Jack Hobbs is coming to Overbury. He's a magnificent stamp with an outcross pedigree