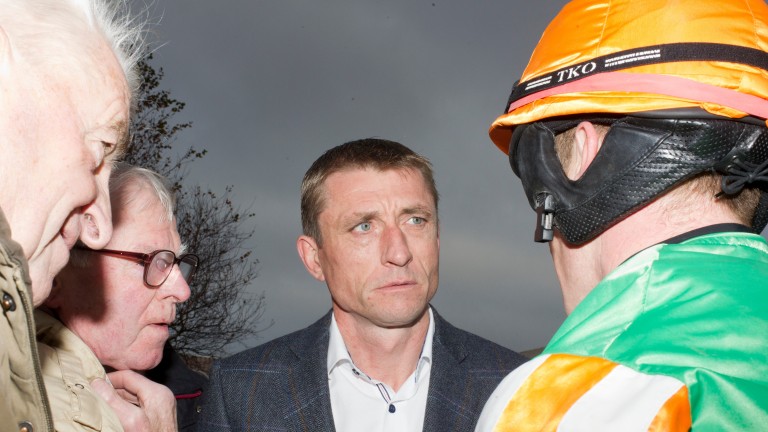 For every top jumps prospect you sell, how many you buy don't make the grade?

WC I don’t like to call any horse bad but, like everyone in this industry, we’re trying to find the real Cheltenham Grade 1 horse, which is very difficult. It’s costing a lot of money to buy horses as stores so to get your money out of them you’d be very lucky. Hopefully the good one you sell covers those expenses. It’s a difficult one to answer but you’re talking about 40 per cent of the horses who wouldn’t make the grade.

DD There are quite a number of them. The good ones always stand out from the word go and sometimes there are very few at that level.

CM The Grade 1 horses are few and far between but there are others who can go on to win smaller races. Even if they’re not top of the range there’s always a race for them of some kind, whether it be a handicap or something like that. They find a new home and many seem to improve as they get older.

DM There would be quite a number. They don’t all turn out to be good. You’ll just be fortunate to happen on one good bunch at any one time. It’s hard to say that you find opportunities for them as point-to-pointing is so competitive from the flag drop to the finish. You wouldn’t be able to pick a bad race any more as everyone is so competitive.

RT There are definitely more bad ones than good ones. Some of them might come to hand straight away and some of them might need a year or a bit more time. Unfortunately there’s a good few more who aren’t at that top level. You wouldn’t always want to write a horse off though.

WC Getaway, I know he’s had a couple of runners but he’s a sire going the right way. Ask is another one who looks like he could do well. There are a couple of newer sires at Coolmore who look good such as Fame And Glory and Soldier Of Fortune. They look nice horses and time will tell.

DD Getaway or Ask would be among the top bloods coming along now. Their stock have good temperaments and are nice to work with. They take to the work that I do with them very well and they’re very straightforward. They’re two stallions who look like they could be very good.

CM Getaway and Ask would be my pick of the younger sires. I have a few horses by them who have shown a bit of potential - they both produce nice stock who are easy to work with. They have good temperaments as well.

DM Getaway. He appears to have a couple of nice horses coming through at the moment. I know he has a lot still to do but his stock seem to be ones who do everything at home. You’d like to hope that his stock go on - they’re big, good-looking horses and you need those types as they're the ones who win the Grade 1s.

RT Getaway seems to be popular at the moment. They’re only five-year-olds and they might just be better as they go on with time.

Which established sires have you had most success with?

WC King’s Theatre has done very well for me, and Scorpion is another I’ve enjoyed success with. Scorpion is the sire of Tell Us More, a very good horse now with Gordon Elliott. Your chances of having a good horse by a proven jumps sires increase a lot - precisely because they’re proven!

DD Milan and Beneficial, as they’ve been very lucky for me and things have worked out well with them. Their stock jump very well, stay well, go through the soft ground and are really good for point-to-pointing.

CM King’s Theatre, Presenting and Flemensfirth. They pass on all the qualities you need for jump racing and my horses are easier to sell if they're by stallions like those.

DM Oscar. I’ve had Finian’s Oscar and Tricky Trickster by him. They’re simple horses to train - they eat, sleep and there’s no big deal with them. There’s a lot to be said for a horse who goes into his stable and eats and sleeps because there’s no worrying involved. They’re good performers when they hit the track.

RT I’ve had a lot of success with stock by Oscar - they’re good tough horses and there’s an element of class when they go onto race under rules afterwards. Beneficial is another who I’ve had success with - there’s not much difference between his and Oscar’s stock but they probably benefit from better ground.

How hard is it to resist private offers for your good horses and go to auction?

WC It’s a tricky one but it depends on your horse. Personally, I’ve nearly always gone to public auction because if you have the so-called good horse and you have a couple of people on the phone to you after they’ve won, you don’t want to disappoint them and it’s better to let them bid on it. I’ve probably got more for horses going to public auction than selling at home, but then there are certain trainers and owners who don’t buy at public auction.

DD It’s very hard but it’s always better to go to the ring because that’s where you can find out how much exactly they are worth. It also gives everyone a chance to get involved and see the horse in the flesh. The results in the ring for pointers over the past year have been very good too, and the horses are going on to do good things on the track.

CM I prefer private sales because it saves a lot of hassle rather than going across the water [to Britain]. It's far, far handier if you can sell the horses to a few good customers who have bought from us before. It's expensive to travel for a few days and having to send a vet over there. I haven’t had too many at the sales recently and 90 per cent of our stock would be sold in private sales. I do go to the sales from time to time but find that easier when we have less stock.

DM It's difficult and there’s no point in saying it isn’t. There’s times when you do take private offers. When you go to auction you get a true reflection of the horse's value but if you get a big offer from someone it’s very hard to say no to that. The sales are producing good results and the stock doing well is a contributory factor to whether to go to or auction or not.

RT Usually you end up going to the sales - the results from them are showing how good the standard of point-to-points are now. There’s a mix of private sales and going to auction but I wouldn’t have a preference. It sure can be hard to resist private offers sometimes!

Which point-to-points do you favour for your horses?

WC In the last couple of years things have changed. You typically had courses in the country that would be the place to have a winner. You couldn’t run into a good horse at any course on the weekend but people are now running their horses once they’re ready. There’s a lot of good tracks out there and Lingstown has been one of those good tracks for years. People like running their horses there as it’s a big galloping track.

DD Oldtown is a very nice track and Lingstown is a course that has always been lucky for me. Both are big galloping tracks and offer a good test for a pointer.

CM Loughanmore is my home ground as it’s just across the road from us - it’s always good getting a winner there. I can also walk the horses across to the course. Tattersalls is quite a good track too. They’re both good galloping tracks.

DM Lingstown and Oldtown - both are very good tracks. They’re big galloping tracks and there’s nowhere to hide. As a rule it gives a true reflection of a horse’s ability. Loughanmore is one of the top tracks that I’d spend a lot of time at too.

RT Dromahane is a good stayers' track and there’s no hiding places there. It’s a good honest track.