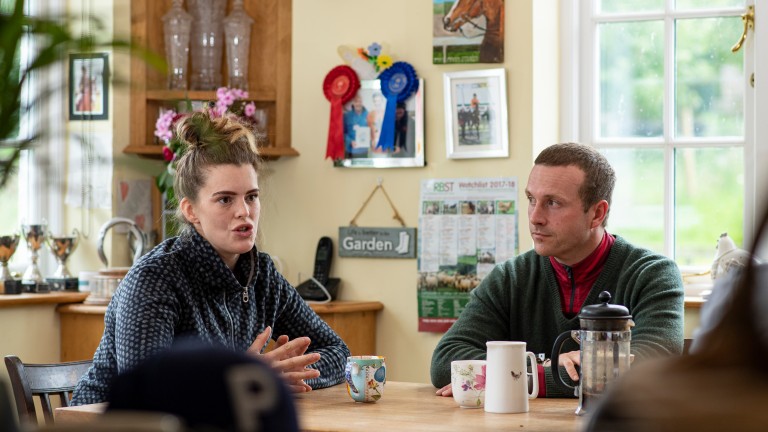 One week on from their first racecourse success under the Valentine Bloodstock banner, Lizzie Kelly and her husband Ed Partridge will be looking to mirror that result in the sales ring when the operation offers Hamilton Dici at Thursday's Goffs UK December P2P Sale at Yorton Farm.

Trained by Kelly's mother Jane Williams, the three-year-old son of Coastal Path was picked up at the 2018 Arqana Autumn Sale for €18,000 and duly proved himself a performer of some promise as he opened his account at the second time of asking at Warwick.

"It's the first of many hopefully," said Partridge when asked about Valentine Bloodstock's consigning debut. "We bought Hamilton Dici from Arqana a couple of years ago. Me and Lizzie broke him in last year as a two-year-old and he's been steady away ever since.

"He ran really well at Compiegne on debut but when we took him to Warwick we thought he'd be up against it taking on those sharper Flat recruits like Dan Skelton's Ambassador. We'd have been delighted if he'd just hit the frame as he's very much one for the future.

"He's plainly a horse with plenty of ability, though, if he's able to win a juvenile hurdle against those sharper rivals. He's a nice-sized horse and he's by a sire who's hugely in demand. We've had three or four by Coastal Path come through the ranks at Culverhill and they're all lovely horses to work with. This horse is very much the same, he's very straightforward and a gentleman to deal with." 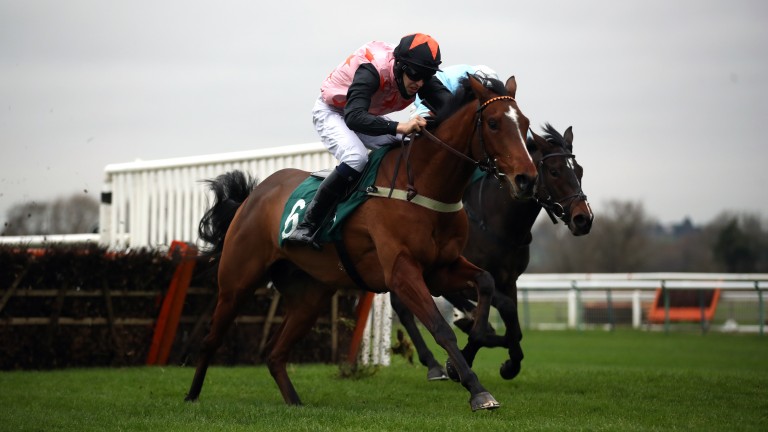 Hamilton Dici carries the Valentine Bloodstock silks to victory at Warwick
Getty Images
The husband and wife team have enjoyed a whirlwind couple of weeks, with Hamilton Dici's breakthrough victory preceded by the birth of the couple's first child, Hugo Philip Partridge, who arrived on November 28.

"He's doing really well and seems very content," reported Partridge of the new arrival. "He's been sleeping well, apart from last night when I had to be up early to bring the horse to Yorton! Lizzie isn't here because she's at home with the baby but we're really looking forward to it. We both enjoy being busy and there's been a lot going in the last half a year with the baby and the business and everything Lizzie has going on."

As for their expectations for Hamilton Dici's future prospects, Partridge says they are hopeful of a fruitful sale while remaining mindful that the ultimate payoff for their business model would be the horse going on to land a big prize for new connections.

"Hopefully he makes the money we want him to make and then goes on to do the job for whoever buys him," said Partridge. "We both get a lot of enjoyment from the process of bringing horses along and if he goes on and wins a Grade 1 for someone else we'll be over the moon.

"The area of the thoroughbred industry that we both enjoy the most is bringing young horses through. Obviously Lizzie was massively involved in racing and I've worked in racing for a while as well, but we both love the bit that comes before the racecourse as it's great seeing these horses develop."

A trip to Yorton Farm for the Goffs UK December P2P Sale is not the only visit to Wales that the Valentine Bloodstock team have planned, with Honneur D'Ajonc, who finished runner-up to the exciting Monmiral on debut, due to contest the Grade 1 Finale Juvenile Hurdle before also heading to the sales in the new year.

FIRST PUBLISHED 4:35PM, DEC 16 2020
He's plainly a horse with plenty of ability though if he's able to win a juvenile hurdle against those sharper rivals