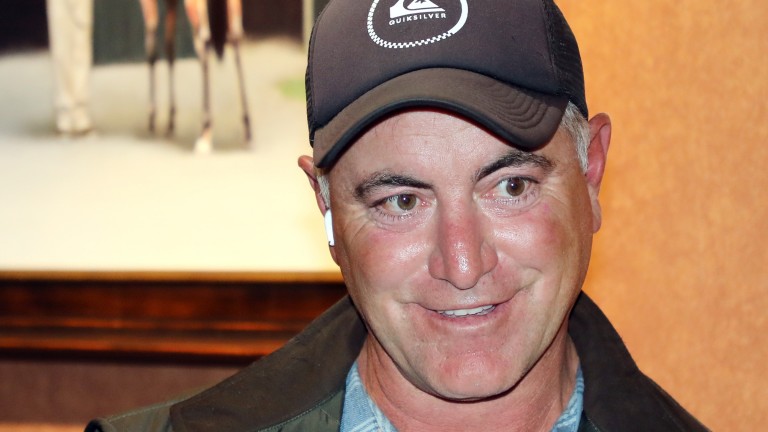 From the moment the first horse entered the ring during the March 16 opening session of the Ocala Breeders' Sales March Two-Year-Old in Training Sale, buyers on the grounds put their foot on the gas pedal and didn't let up until the last two-year-old left the stage.

"You can feel the energy here," said bloodstock agent Mike Ryan. "It's vibrating. There are a lot of people here. You could feel it walking around the barns the last few days. There is a lot of energy. People want good horses. Purses are rising at tracks across the country - even at some of the smaller tracks - and it's a real breath of fresh air for many of us who make a living at this game."

During the 2020 renewal of the March sale, at which the under tack show began one day after the World Health Organization declared Covid-19 to be a global pandemic, OBS reported 145 horses sold from 241 offered for gross receipts of $12,994,500 during the first session.

"It was a very good day," OBS director of sales Tod Wojciechowski said after Tuesday's session. "It seemed like it held through the entire sale - a lot of horses got moved, with a very low RNA rate. What was great is that we saw horses trade at a lot of different levels.

He added: "What we saw presale, from people on the grounds, and that pent-up energy we talked about, it bore itself out today, for sure. Kudos to the consignors for the quality of horses that they brought. Without them, it's hard to have a sale, and they did a great job of presenting some horses that people really wanted."

Topping the day were two juveniles purchased for $550,000 each. The first to reach that mark was hip 48, a colt by Hill 'n' Dale Farms stallion Violence out of Lemon Belle. Bred in Kentucky by Rock Ridge Thoroughbreds, the colt's page was one of the more impressive in the catalogue, as his second dam is Graded winner Queenie Belle, dam of Breeders' Cup Ladies' Classic winner Unrivaled Belle, who is better known herself as the dam of two-time champion Unique Bella.

Consigned by Kirkwood Stables, agent, the colt was purchased by Spendthrift Farm. He worked the co-fastest eighth-mile of :9 4/5 during the under tack show.

"He is a very, very nice horse," said Ned Toffey, general manager of Spendthrift. "We thought he was one of the best horses in the sale."

Also just tipping over the half-million dollar mark was hip 216, a bay filly by Ashford Stud's Munnings out of Show Me.

Bred in Kentucky by Nathan McCauley, the filly was purchased by Donato Lanni from Eddie Woods' consignment. She breezed an eighth-mile in :10 during the under tack show.

"Bob [Baffert] and I came and shopped the sale together, and she's the type of filly that looks like she will fit right into the California programme," said Lanni.

"She looks fast. We're all on the same horses; there aren't any secrets. These horses go through a lot at the sales and they have to survive [the process], and she looks like a really nice filly. Her breeze was very good, and she came out of it great."

Among other horses to reach the upper echelons of pricing was hip 202, a colt by Claiborne Farm's War Front also from the consignment of Eddie Woods. The bay colt was purchased by trainer Ron Ellis on behalf of Richard Templar's Doubledown Stables for $525,000.

Bred by Lewis Thoroughbred Breeding in Kentucky, the colt is out of stakes winner Serene Melody. His second dam is champion Serena's Song, dam of Group 1 scorer Sophisticat plus Grade 2 winners Grand Reward and Harlington.

Serena's Tune, in turn, is the dam of Serena's Cat, producer of Honor Code. Hip 202 breezed an eighth-mile in :10 during the under tack show.

"I was told to find what I thought was the best horse in the sale and buy it - that was it," said Ellis. "I thought he worked awesome and he had an amazing pedigree and I have a lot of respect for Eddie Woods getting them up to this point. All the pieces fit.

"I didn't think there was a lot of depth to the catalogue so we, and others, really zeroed in on a few horses and I think that drove the prices up on those few."

FIRST PUBLISHED 10:23AM, MAR 17 2021
Kudos to the consignors for the quality of horses that they brought. Without them, it's hard to have a sale