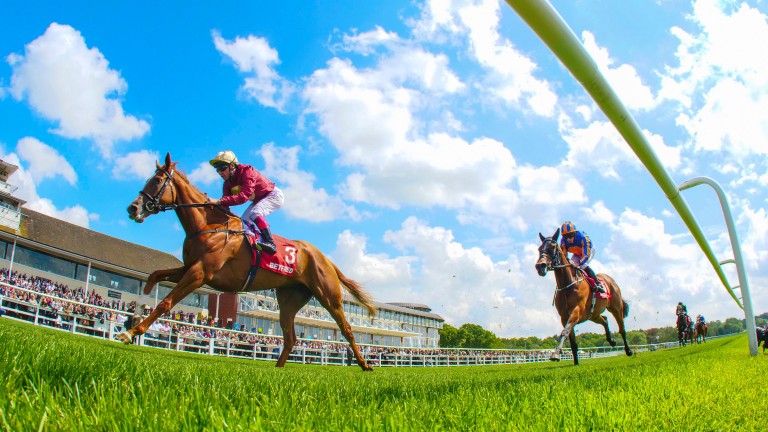 The catalogues for the autumn yearling sales will soon be on the way to print and emblazoned upon many of their pages will be one name: Rafha. It has become so synonymous with speed and precocity it acts as a hallmark of quality to many bloodstock agents.

Through her sons Invincible Spirit and Kodiac, and grandsons such as Lawman, Zebedee, Born To Sea, Mayson, Swiss Spirit, Kingman and Charm Spirit, Rafha has started a dynasty.

Rafha won five times for Sir Henry Cecil and owner Prince Faisal. The daughter of Kris won the Group 3 May Hill Stakes as a juvenile and returned at three to dismantle the field for the Listed Princess Elizabeth Stakes at Epsom by ten lengths. Next she took the Lingfield Oaks Trial before showing her rivals a clean pair of heels in the Prix de Diane in 1990 .

Rafha’s first six living foals were all colts. So for the first few years of her broodmare career it looked as if ‘Rafha’ may never appear on the bottom line of a pedigree. However the continuation of her female line was assured by Rafha’s 1998 mating with Danehill. On April 9, 1999, Rafha delivered for Prince Faisal a bay filly later to be named Massarra.

John Dunlop sent Massarra out six times as a two-year-old. She won a Listed contest over 6f on her third start but was then denied by a neck in the Group 2 Prix Robert Papin. A placing in the Nell Gwyn was the highlight of her career at three.

Massarra’s first foal, the Selkirk filly Tebee, was victorious just once for John Gosden but the Clarehaven trainer has fared much better with her daughter Hertford Dancer. The Foxwedge filly justified Highclere Stud’s decision to retain her for their 5 Hertford Street Racing Club by emulating her granddam Rafha’s victory in the Lingfield Oaks trial this season. Third when supplemented for the Ribblesdale, she looks to add the Group 2 Lancashire Oaks to her CV on Saturday.

Dalakhani was selected to be the second name on Massarra’s dance card. Although the resulting filly didn’t set the world alight on the track, she did produce the Irish Derby fourth Kilimanjaro. The son of High Chaparral, who also won the Lingfield Derby Trial, was a 275,000gns Tattersalls Book 2 purchase for MV Magnier.

The Rafha family precocity was much in evidence in Massarra’s 2009 offering, the Cape Cross filly Nayarra. Nayarra made her debut in early May as a two-year-old but her connections were forced to wait until the October of that season for her to break her maiden. This first win, on her ninth start, was however in the Group 1 Gran Criterium. The performance earned her the title of champion two-year-old filly in Italy for 2011.

Nayarra may soon be set to contribute to her female family as a broodmare through her son Lahore. The US-bred son of the recently pensioned Elusive Quality is unbeaten in two runs for trainer Roger Varian.

MV Magnier saw the potential of the Rafha female family in 2009 and bought Massarra for 600,000gns at the Tattersalls December Mare Sale. Since this acquisition Massarra has been mated exclusively to Galileo.

Gustav Klimt: is the latest runner for the Galileo-Massara mating
Patrick McCann

All five of the Galileo-Massara foals to have run have won as juveniles. They include two-year-old Listed winner Cuff and Group 3 Silver Flash victress Wonderfully. In 2015 Ballylinch Stud paid $1.8 million to acquire Wonderfully at the Keeneland November Breeding Stock Sale and she has since delivered a filly foal by Smart Strike.

Mars is another of the five two-year-old winners delivered since Massarra’s move to Tipperary. He won his only start at two and then progressed to finish third in the St James Palace Stakes and fourth in the Eclipse.

The latest runner for the Galileo-Massarra mating is the exciting Gustav Klimt. He graduated in a Curragh maiden on Sunday and holds entries in the Phoenix Stakes and the Vincent O’Brien National Stakes later this season.

Another female line descending from Rafha may be growing in importance through Group 3 winner Acts Of Grace. Now in Australia, the daugher of Bahri changed hands in April at the Inglis Chairman's Sale for A$250,000 (£146,000/€166,100). She has produced four winners including Height of Fashion Stakes fourth Contradict.

Rafha has two other daughters who have yet to make their mark as broodmares. The more promising of the duo, Affectionately, had her first winner on Monday when Asaas, a son of Distorted Humor, broke his maiden for Prince Faisal and Roger Varian.

It is poignant to acknowledge the role played in th e rise and rise of Rafha by Major Johnnie Lewis, who passed away at the end of last month.

As bloodstock adviser to Prince Faisal he guided the career of Rafha and nurtured this hugely influential family. His memorial service was on Friday but he is commemorated every day of the year whenever a descendant of Rafha steps foot on a racecourse.

FIRST PUBLISHED 7:24PM, JUL 7 2017
It is poignant to acknowledge the role played in th​e rise and rise of Rafha ​by Major Johnnie Lewis, who passed away at the end of last month