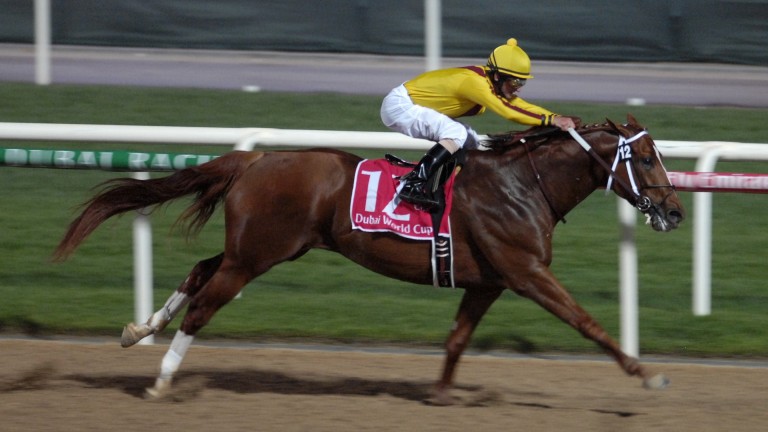 Curlin: sire of Classic performers in each of his crops, in his racecourse pomp
Edward Whitaker
1 of 1
4:13PM, MAY 3 2017

One aspect of Curlin’s stud career which has smoothed his passage towards America’s elite is his ability to throw Classic runners with regularity.

In 2013, his first-crop star Palace Malice took the Belmont Stakes; in victory he became a belated first Graded stakes winner for Curlin, himself a $10.5 million earner and dual American Horse of the Year who had started his stud career at $75,000.

A year later, Ride On Curlin finished second in the Preakness Stakes and then in 2015 Keen Ice was third in the Belmont Stakes en route to lowering American Pharoah’s colours in the Travers Stakes. It was last year, however, that Curlin’s achievements went to another level.

Roll on to 2017 and Curlin looks set to again feature prominently on the American Classic trail through Isabelle de Tomaso’s homebred Irish War Cry, whose near four-length victory in Saturday’s Grade 2 Holy Bull Stakes at Gulfstream Park propelled him into the reckoning for the Kentucky Derby, a race his trainer Graham Motion won in 2011 with Animal Kingdom. The Holy Bull was also a race that well and truly burst the bubble of champion two-year-old Classic Empire, who was left toiling well adrift in third.

Should the unbeaten Irish War Cry, who previously won the Marylander Stakes at Laurel Park, make it to the Kentucky Derby on May 6, it will mark the fifth year in as many crops that Curlin has been represented by a runner in a leg of the American Triple Crown.

That Curlin should be exerting such an influence is maybe not such a surprise in light of his credentials. After all, as an exceptional racehorse who won seven Grade 1 races including the Breeders’ Cup Classic, Preakness Stakes and Dubai World Cup, the son of Smart Strike was naturally supported by a number of quality mares in his early seasons at Lane’s End Farm, among them champion Rachel Alexandra.

However, Curlin has not been immune to the swings of the market.

It is out of this crop, that numbers just 39 foals, that Irish War Cry has emerged.

Much has happened to change the perception of Curlin since that 2014 crop was born. In the spring of 2015, a 20 per cent share in Curlin belonging to disbarred attorneys Shirley Cunningham and William Gallion came on to the market. John Sikura, in partnership with Elevage II, snapped up the share with a winning bid of approximately $6.2m; it was a figure that raised some eyebrows but, as it turned out, Sikura and Elevage were right on the money.

Since then, Curlin’s haul of Grade 1 winners has swollen to seven while his tally of stakes winners stands at 31. He subsequently moved across Kentucky to Sikura’s Hill ’n’ Dale Farm and, following a year in which he finished second to Tapit on the leading North American sires’ list with the earners of over $12.7m, now commands $150,000.

Irish War Cry is the first Group or Graded stakes winner under the immediate generations of his family but his background beyond that is particularly distinguished and will appeal to anyone with an appreciation of the history of the sport.

First, he is a homebred for de Tomaso, who bred the colt in New Jersey (he is one of only 116 Thoroughbred foals born in the state in 2014) out of her winning homebred Irish Sovereign.

Tomaso, 86, is the daughter of Amory Haskell, founder of the Monmouth Jockey Club, and was a highly accomplished - and daring - racing driver in continental Europe during the 1950s. Later that decade, she raced successfully as a team with her Argentinean husband Alejandro de Tomaso and in 1959 the pair founded the De Tomaso motor company, renowned for its production of race and sports cars.

De Tomaso has been in possession of Irish War Cry’s family for the best part of 45 years. Her association began with his fourth dam, the British-bred Tambourine mare Tabebuia. Foaled in 1965, she was the daughter of a half-sister to 1961 Derby winner Psidium but also a direct descendant of Pretty Polly - recently crowned as the Racing Post’s number one Queen Of The Turf - via Ducca Di Buoninsegna, a foundation mare for Federico Tesio’s Razza Dormello-Olgiata.

Tesio picked up Ducca Di Buoninsegna, a granddaughter of Pretty Polly, for 210gns as a yearling in 1921 and out of her bred Delleana, the Gran Premio d’Italia winner of 1928. In turn, Delleana gifted Tesio with his 1937 Italian Derby winner Donatello, one of Tesio’s finest masterpieces who became an important sire, as well as Group 1 winner De Nittis and 1933 Italian Oaks heroine Dossa Dossi, the fourth dam of Tabebuia.

Tabebuia was a grand servant for De Tomaso, foaling three Italian Listed winners in Task, Lupo Di Mare and Irish Trip. In turn, Irish Trip, by Saint Crespin II, bred another Italian Listed winner in The Irish Knight before transferring to the US, where she left behind Irish War Cry’s winning granddam Irish Genius, by Beau Genius.

Irish War Cry is the best of five winners out of Irish Sovereign, although the mare did achieve the noteworthy feat of producing a black-type runner, Irish Politics, by the disappointing former Kentucky stallion Political Force.

Irish Sovereign is a daughter of the Danzig stallion Polish Numbers, a stalwart of the Maryland breeding industry for many years. She was most effective over 6f for De Tomaso but several of her other winners, namely the First Defence filly Irish Defence, the Even The Score filly Irish Score and the English Channel gelding Irish Strait, won at around a mile.

Curlin regularly imparts a degree of stamina, for which there is no better example than his record in the American Classics. It would also be disappointing were Irish War Cry not to keep progressing and, as such, he appeals as a strong candidate to place his distinguished family back in Grade 1 lights for his colourful owner-breeder down the line.

Tequilita’s win in Saturday’s Grade 2 Forward Gal Stakes at Gulfstream Park was made all the sweeter for Michael Matz by the fact the trainer not only bred the filly but also conditioned her sire Union Rags and dam Sangrita to win major races. Union Rags was saddled by Matz to win the 2012 Belmont Stakes and 2011 Champagne Stakes, while Sangrita, by Mr Greeley, won the 2006 Grade 2 Chilukki Stakes. Tequilita is a third Graded Stakes winner for Lane’s End stallion Union Rags, who got off to an excellent start last year when his first juveniles included Grade 1 winners Dancing Rags and Union Strike.

Mo back on Classic trail

American sensation Uncle Mo, sire of last year’s Kentucky Derby winner Nyquist among others, appears to have a strong Classic contender for the second time in as many years in Regal Mo, who rolled to an easy success in Saturday’s Grade 3 Robert B Lewis Stakes at Santa Anita. His win also came on the same day that Uncle Mo was represented in Australia by Group 3 Eskimo Prince Stakes winner Man From Uncle. Although Uncle Mo was a true dirt runner, he is out of a mare by turf influence Arch and Man From Uncle is one of six stakes winners on the turf for the stallion.

Kitten’s Cat ran out a fitting winner of Saturday’s Kitten’s Joy Stakes at Gulfstream Park, a race named in honour of his sire. What’s more, the colt races as a homebred for Ken and Sarah Ramsey, who have been so influential in developing Kitten’s Joy into an international presence.

The Niarchos family broke new ground on Friday when Dawn Wall landed a maiden at Canterbury to become their first Australian winner. Trained by Chris Waller, the daughter of Fastnet Rock is campaigned in partnership with Coolmore and was a A$1.3m purchase through the BBA Ireland at the 2015 Inglis Easter Yearling Sale. She is a half-sister to Princess Margaret and Nell Gwyn Stakes winner Osaila and out of Mennetou, a daughter of Arc heroine Detroit.

Sandown’s card on Saturday turned the spotlight on the late Arctic Tack Stud stallion Heron Island, who supplied two of the afternoon’s winners in Lord Of The Land, winner of the Grade 3 handicap hurdle, and Otago Trail, successful in the three-mile handicap chase.

FIRST PUBLISHED 4:13PM, MAY 3 2017
One aspect of Curlin’s stud career that has smoothed his passage towards America’s elite is his ability to throw Classic runners with regularity