Son of Invincible Spirit is out of €62,000 purchase Boldarra 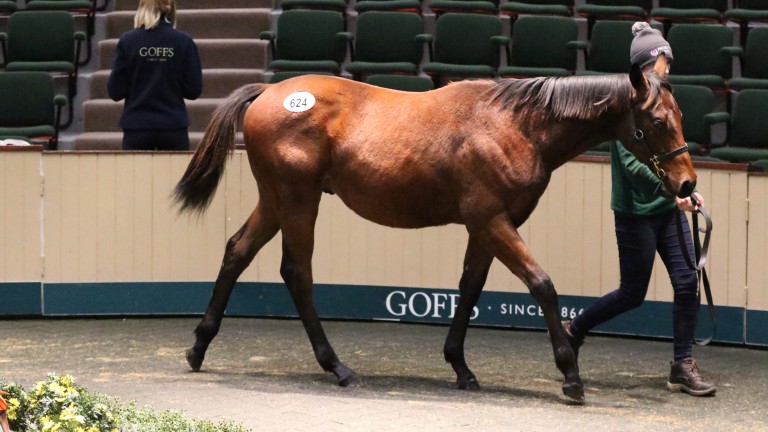 The Invincible Spirit colt out of Boldarra takes his turn in the Goffs ring
Peter Mooney
1 of 1
By James Thomas UPDATED 7:44PM, NOV 20 2019

Members of the Irish National Stud Mare Syndicate were among the breeders toasting a fruitful sale at Goffs on Wednesday, with the group having witnessed Anthony Stroud go to €330,000 on behalf of Godolphin to secure their Invincible Spirit colt out of Boldarra.

The stud added the unraced daughter of Giant's Causeway, a sibling to Graded stakes winners Sarach and All Included, to the mares syndicate portfolio at €62,000 during the 2017 Arqana Breeding Stock Sale, and were well rewarded for their decision to send her to the Irish National's flagship sire the following year, when Invincible Spirit stood for €120,000.

Stroud, who had to see off the attentions of the Pier House Stud team and Frannie Woods, said: "He's a very nice horse and comes from a very good hotel. He'll be a good addition to our band of foals and obviously Invincible Spirit speaks for himself."

"We're delighted," said the Irish National's chief executive Cathal Beale. "All the right people were on him so it worked out great. The key thing is it was a big result for our mares syndicate, it's a great result for all the shareholders - they're ecstatic."

Beale went on to explain the background to - and make up of - the syndicate. He said: "We started the syndicate two years ago and the shareholders each invested €16,000 in a portfolio of mares.

"We made 25 shares available and we kept the other 25, we bought six mares, including Boldarra, and we said we'd bred them well, either to Invincible Spirit or another of our own stallions. The shareholders are thrilled, they're absolutely delighted with themselves and are going for a great lunch to celebrate!"

The syndicate also sold a National Defense colt out of Starbright to BBA Ireland for €26,000 during Monday's session.

FIRST PUBLISHED 7:42PM, NOV 20 2019
They're thrilled, they're absolutely delighted with themselves and are going for a great lunch to celebrate!