Irish National Stud plays host to the Duchess of Cornwall

Invincible Spirit among those to be met by the regal visitor 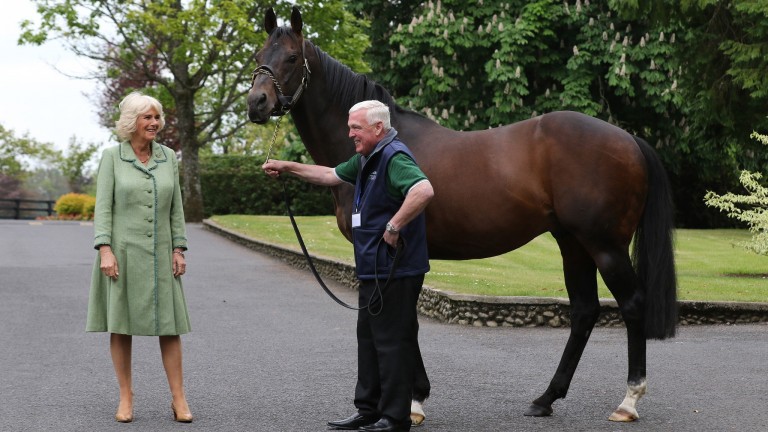 The Duchess Of Cornwall meets the Irish National Stud's flagship stallion Invincible Spirit and his handler Daffer Kelly
CAROLINE NORRIS
1 of 1
By James Thomas 6:55PM, MAY 11 2017

It has been a busy 24 hours at the Irish National Stud, as not only has the County Kildare operation announced Cathal Beale as its new chief executive, the stud also received a visit from the Duchess of Cornwall on Thursday.

The Duchess's visit comes six years after the Queen paid a visit to the stud, which is home to eight stallions and also offers students a range of courses aimed at preparing them for careers in the thoroughbred industry.

The Duchess met a selection of the stud's international students, with nine nationalities represented among the 25 current enrollees on the stud management programme. The Duchess met with Cameron Ring from New Zealand, Damien Fitton from Australia, Michael Balaz from Canada, Anya Shroff from India, Thomas Wainwright and William McNeile from the Britain.

The Duchess was introduced to a member of racing royalty residing at the stud, its flagship stallion Invincible Spirit. The Duchess is no stranger to the merits of the sire, and this year has a foal on the ground by one of his sons, the Highclere Stud resident Cable Bay, who, coincidentally, was bred by the Irish National Stud.

The royal visitor was also introduced to the stud's five retired racehorses, including multiple Grade 1 winners and champions Hurricane Fly and Hardy Eustace.

The stud was also hosting a forum on the subject of thoroughbred welfare during the visit, which allowed the Duchess to meet speakers such as veterinary surgeon Michael Sheahan MVB from the Department of Agriculture, Peter Webbon MRVCS, Sharon Newsome (Irish Horse Welfare Trust) and Diana Cooper, project leader for the International Forum for the Aftercare of Racehorses, who was representing Sheikh Mohammed’s Falcon and Associates.

On her departure, The Duchess was presented with a 35 year old Bonsai Irish Birch tree by the chairman of The Irish National Stud Matt Dempsey.

FIRST PUBLISHED 6:55PM, MAY 11 2017
On her departure, The Duchess was presented with a 35 year old Bonsai Irish Birch tree