Daughter of Lawman due to visit Dubawi in 2017 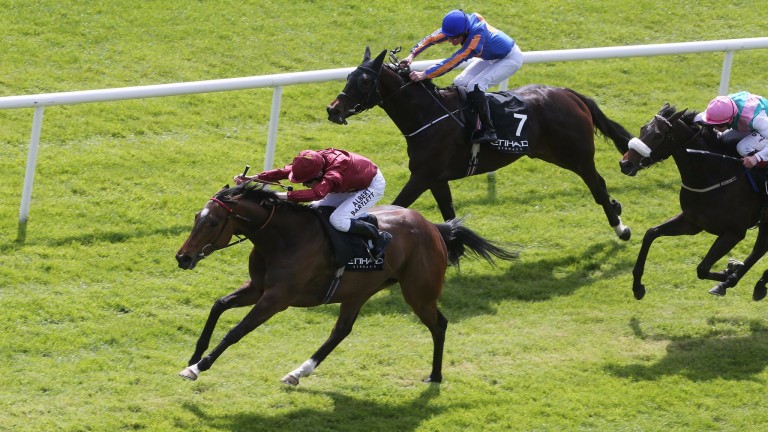 Just The Judge clears away to Classic success at the Curragh
CAROLINE NORRIS
1 of 1
By James Thomas 1:15PM, FEB 15 2017

“She very generously foaled in the mid-morning when the vets and everyone else were present, which took some of the pressure off,” said Qatar Racing’s racing manager David Redvers.

“She foaled a strapping bay colt which was great news. I couldn’t be happier really, he’s a belter.”

The new arrival weighed in at a healthy 56.5 kilograms, and both he and Just The Judge are reported to be in good form.

“The mare was a little uncomfortable afterwards as he was such a big foal but everything is absolutely fine now. She’ll go back to Dubawi this year. We’ll breed the best to the best and hope for the best," added Redvers.

The Dubawi colt was bred jointly by Qatar Racing and the China Horse Club, with the latter having a 25 per cent share in the mare after the two powerhouses joined forces at 4,500,000gns for the daughter of Lawman at the 2014 renewal of the Tattersalls December Mares Sale.

Having been snapped up for just €50,000 as a yearling Just The Judge won five of her 15 starts for Charlie Hills, including her first three as a juvenile, a run that culminated with victory in the Group 2 Rockfel Stakes.

She began her three-year-old campaign with a close second in the 1,000 Guineas before going on to land the Irish equivalent by a comfortable one and a half lengths under Jamie Spencer.

Spencer was again in the plate when she added a second top-level win to her race record, taking the 2014 E.P Taylor Stakes at Woodbine by half a length from Odeliz.

Just The Judge is out of the Rainbow Quest mare Faraday Light, a half-sister to Group 3 winner and Oaks third High Heeled.

FIRST PUBLISHED 12:26PM, FEB 15 2017
She foaled a strapping bay colt which was great news. I couldn’t be happier really, he’s a belter