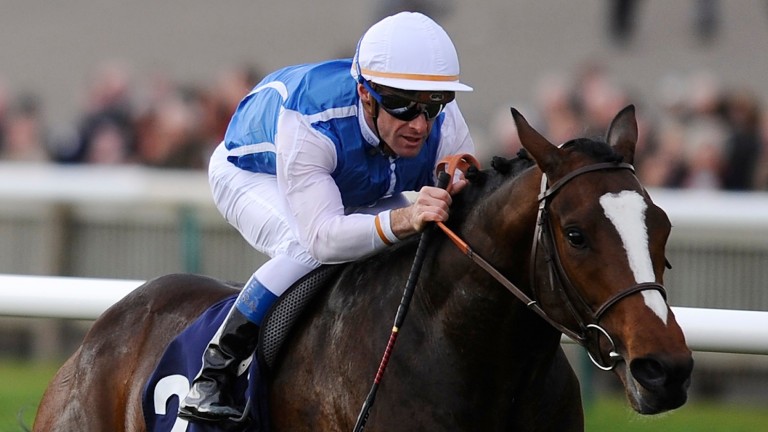 The colt, trained by Fabrice Chappet for Fiona Carmichael, was driven out by Pierre-Charles Boudot to a short-neck victory over Cascadian, a son of New Approach, thus making it a one-two for Galileo sire sons.

Gustav Klimt, by the Coolmore phenomenon Galileo himself, ran third.

Intellogent had finished fourth to Study Of Man in the Prix du Jockey Club on his last start and had won the Group 3 Prix de Guiche before that.

He stood at Cheveley Park Stud at a fee of £20,000 in 2018, having spent the preceding two seasons at Haras du Quesnay in Normandy. His first two books of mares were covered at Cheveley Park.

Intellogent was bred by leading French nursery Ecurie des Monceaux out of the winning Kheleyf mare Nuit Polaire. He is a second Group 1 winner as damsire for former champion first-season sire Kheleyf, after the speedy Tiggy Wiggy.

Nuit Polaire – a €100,000 Arqana August yearling purchase by Monceaux before she joined their broodmare ranks – hails from a fruitful German family.

Pierre-Yves Bureau, the Wertheimer brothers' racing and bloodstock manager, on the success of Intello as a sire

"It’s fantastic. We’ve already seen several good horses from this crop but to win a Group 1 and one against a very good field is really great.

"Like a lot of people I thought he was the winner of the Jockey Club 200 metres [a furlong] from home and congratulations to the whole team around him to have the idea of bringing him back in trip.

"It reminds me of his father, who went back to 1,600 metres after winning the Jockey Club in much the same style. He gets horses with plenty of speed which is great news.

"It’s important and confirms his good start at stud. I know the Jean Prat isn’t a Classic in the real sense of the term but given the horses gathered together here it was a really good race.

"He's back in England at Cheveley Park for two years, 2018 and 2019. We are in a three-way partnership along with Cheveley Park and Le Quesnay and I am happy it is working out so well for everybody."

She is a half-sister to Oaks d'Italia winner Night Of Magic, the dam of German champion Nightflower, and to Group 3-placed Neele, the dam of Grosser Preis von Berlin winner Nymphea and German Derby hero Nutan.

Another of Nuit Polaire's siblings is none other than this year's Champion Hurdle runner-up Melon.

Night Polaire is out of Night Teeny, a winning daughter of Platini and half-sister to German Oaks winner Night Petticoat, who produced the German Classic-winning half-siblings Next Desert and Next Gina.

Next Gina is the granddam of Hong Kong superstar Pakistan Star, winner of the Audemars Piguet Queen Elizabeth II Cup and Standard Chartered Champions and Chater Up at Sha Tin this year.

This is a very active family, as besides Intellogent, Melon and Pakistan Star, Nutan and Nymphea's half-sister Navaro Girl was third to Bateel in the Prix Corrida in May.

Moreover, Next Desert and Next Gina are half-siblings to Next Holy, who is the dam of Not Mine – who finished one place behind his close relative Intellogent when fifth in last month's Prix du Jockey Club and has subsequently been sold for big money to race in Hong Kong.

Amanda Skiffington bought Intellogent on behalf of Carmichael for €320,000 from the Arqana August Yearling Sale in 2016.

This year's renewal of that auction features the chance to buy the newly crowned Prix Jean Prat king's half-sister by Gleneagles, but prospective purchasers will have to make sure they get to the ring early as she is catalogued as lot 8.

Kodiac hits 20 two-year-old winners - but can he break his own record?

FIRST PUBLISHED 5:29PM, JUL 8 2018
It reminds me of his father, who went back to a mile after winning the Jockey Club in much the same style