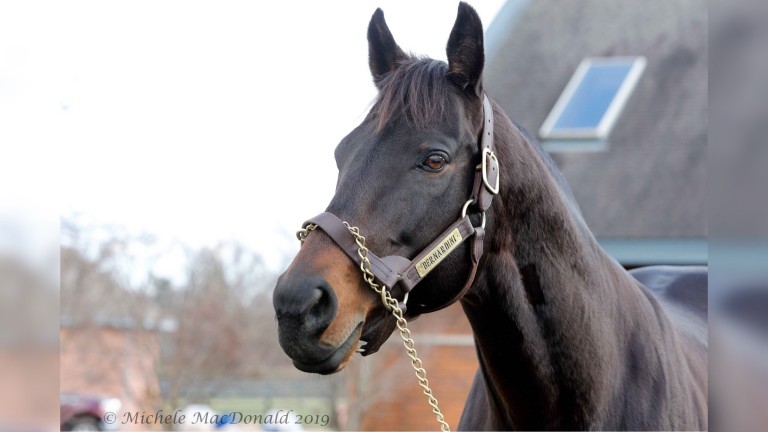 There’s an empty stall in the stallion barn at Godolphin’s Jonabell Farm in Lexington that may never be filled, at least not in the way it was for nearly 15 years.

While there is always grieving when a linchpin horse passes away, the mood when champion Bernardini died on July 30 due to complications from laminitis was decidedly emotional at Jonabell – and beyond – as those who best knew the horse and his remarkable character mourned.

While seemingly “just a plain brown wrapper without a speck of white on him,” as farm manager Michael Banahan notes, Bernardini was the extraordinary individual who did nearly everything as ideally as it could be done while displaying a rare kindness that endeared him to those who were part of his life.

“He was one of those special horses that had so much class and was so easy to work around that he just made it an absolute pleasure for everyone who laid their hands on him or dealt with him,” Banahan says of the 18-year-old son of A.P. Indy and multiple Grade 1 winner Cara Rafaela, by Quiet American.

Equine chiropractor Shirley McQuillan, who works on the Jonabell stallions, was among those who offered moving eulogies on social media to the horse, who became the first American Classic winner for Sheikh Mohammed when the homebred won the 2006 Preakness Stakes in his championship season.

“His deep bond with his groom, Philip [Hampton], was something rare and wonderful. His kindness with the mares brought to him, his indicating exactly where I was supposed to treat him, his adoration of the lady who brought apples and treats to the stallions every week, his sense of humour when he thought he had the upper hand."

Hampton was with Bernardini, his hand on the horse’s cheek, when the stallion was euthanized in what McQuillan said was “a noble goodbye to a noble creature who will live in our hearts and in the fire of his sons and daughters.”

Vicky Van Camp, who works in racing administration with Godolphin, wrote on Facebook that “we are just heartbroken over here” under a photo she had posted of Bernardini’s halter.

From essentially the day he was born, Bernardini was exceptional. Acquired by Sheikh Mohammed’s operation privately while in utero from Goncalo Torrealba, who had bought Cara Rafaela for $70,000 as a yearling, Bernardini was foaled on March 23, 2003, at Wimbledon Farm in Lexington, where most of Darley’s American-based mares were boarded at the time.

“I remember he was only a few days old, or maybe even just a day old, when I first went out there and saw him,” says Banahan. “He was a great-looking foal, and he just got better and better as he got older.

"He was just a plain brown wrapper without a speck of white on him, but the more you looked at him you would say he’s an impressive horse. You soon realised this is one of the better animals you’d clap eyes on. He was always like that – he had that regal, regal look about him."

After being weaned, Bernardini sailed through a trouble-free year with Banahan at Raceland Farm, the base for Sheikh Mohammed’s young stock, and then was sent off in the autumn of 2004 for breaking at the Scanlon Training Center near Ocala, Florida.

Banahan says: “When he was a yearling, he was automatically easy to do anything with. When he went down to be broken, same story. No problem, never put a foot wrong. When he went into training [with Saeed bin Suroor’s former assistant Tom Albertrani], it was the exact same story.

“Probably the only time he had a pause at all was in his two-year-old year, when he had a couple of little niggly deals. But once he got to the track and went rolling, it was like everything was automatic. He never took a bad step, he was just so easy to deal with."

In his debut as a three-year-old, Bernardini broke slowly and finished fourth in what would be the worst performance of his career. He then won six consecutive races and a trio of America’s best events, with the Travers Stakes and Jockey Club Gold Cup added to the Preakness, before closing out his career with a second to Shadwell Stable’s eventual Horse of the Year Invasor in the Breeders’ Cup Classic at Churchill Downs. 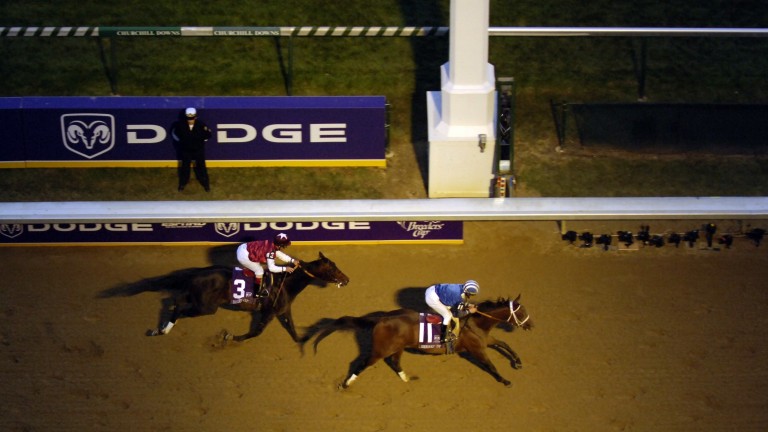 Not only did Bernardini collect an Eclipse Award in the US, but he was rated the world’s best three-year-old that season.

Considering his achievements, “he was always going to be a special horse to us,” Banahan says. But after he arrived at Jonabell after the Classic to take up stud duties, Bernardini proved again how unusually special he was in how quickly he adapted.

“I remember the first day we had him test breeding, and it was like he walks in to the breeding shed and mounts his mare and covers her as if he had been doing it for two years,” Banahan recalls.

“And he was like that every day. Even horses that have been good in the shed will usually hit some blips along the way, but he would come in and one jump and out. He was just very easy and always had good fertility as well.

“If he had been in human form, everyone would have been jealous of him because he just did everything correctly and so easily.”

Due to his nature, Bernardini rapidly became the quintessential educator of newcomers to the stud staff at the same time he was building his reputation as a sire with four Grade 1 winners from his first crop.

He also shuttled to Australia for eight seasons between 2008 and 2015 and sired three Grade 1 winners there, topped by five-time elite victor Boban, as part of his overall total of 15 worldwide to date.

“Any new person coming into the stallion barn who didn’t have experience with stallions or in the breeding shed, he was the horse that taught them all," says Banahan.

"He was the one that built up their confidence that they could do it, because they didn’t really have to do anything – and they knew that as well. They just had to follow the horse’s lead and he would show you what to do.

“That was the character that enamoured him to everyone who worked here or had anything to do with him at all. It was just that class that we talk about. A lot of people talk about class, but it’s probably not as frequent out there as people say it is. But Bernardini was definitely one that exuded fantastic class and character."

Even students in the Godolphin Flying Start programme looked up to Bernardini. A few deemed to have the ability to handle a stallion were allowed to take him to the breeding shed to cover a Godolphin-owned mare in order to gain invaluable experience.

“They got a great kick in being able to do that,” Banahan relays. “He was easy to do it with because he was going to look after them every step of the way. He was just a fantastic horse to have anything to do with. Even if he hadn’t been as good of a racehorse or stallion as he was, he would still probably have been a farm favourite anyway.”

With 14 crops on the ground including 12 of racing age, Bernardini’s offspring have won just under $100 million to date. He has 80 black-type winners, or 5.6 per cent from his 1,435 starters, according to American Jockey Club records.

While his sons have included Grade 1 winners and sires such as Stay Thirsty, Alpha and To Honor And Serve, it is his daughters who are bringing perhaps more lasting glory to Bernardini.

Not only does this group include Grade 1 winners such as Cavorting, Dame Dorothy and Rachel’s Valentina, it also contains many mares who have become outstanding producers, solidifying enduring fame for Bernardini as a top broodmare sire. 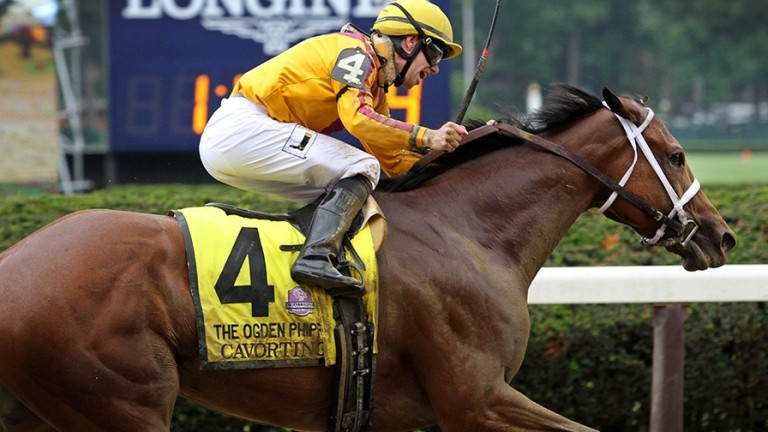 In May he became the youngest stallion ever to reach 50 black-type winners as a broodmare sire and at the time of his death had 54, including 11 at Grade 1 level led by Godolphin’s own Maxfield, Kentucky Oaks winner Serengeti Empress, turf and dirt Grade 1 winner Catholic Boy, and current American turf star Colonel Liam.

Godolphin America President Jimmy Bell reflected: “We have been blessed to have him. A beautiful horse, and a lovely character; we are lucky to have so many of his daughters on the farm to continue his legacy.”

Banahan said there are around 20 to 25 fillies and mares by Bernardini in the Godolphin band at the present time.

Additionally, Godolphin has youngsters by Bernardini to look forward to racing, including a yearling filly out of Keepshercool, a Smart Strike half-sister to the Bernardini mare who produced multiple Graded winner Shared Sense.

Keepshercool, who is out of Grade 1 winner Composure, was bred back to Bernardini this year.

Another Godolphin yearling Bernardini filly with eyecatching credentials is out of champion Ashado’s Street Cry daughter Regent’s House, who also was bred back to Bernardini this year.

One of the most prized daughters of Bernardini in the Godolphin fold is Velvety, the dam of the stable’s Maxfield. Velvety has a juvenile filly by Medaglia D’Oro, who Banahan said was the best yearling of her crop at the Kentucky farm and who has been sent to Europe to race, as well as a weanling colt by Uncle Mo.

“He’s so far ahead of anyone else while 18 – a young age for a broodmare sire – it’s just been phenomenal,” says Banahan. “Every couple of weeks there is another significant winner who is out of a Bernardini mare.”

If there was any negative to Bernardini, who commanded North America’s highest fee in two post-recession years when he stood for $150,000 in 2012 and 2013 before dropping to $35,000 for 2021, it was that he enjoyed exhibiting intense joie de vivre at turnout time.

“Probably the only thing he did that you would have liked to have curbed was that when he went out to his paddock every morning, he would take one or two runs around as fast as he could go. He was such an easy horse that he wouldn’t have a chain across his nose or in his mouth; it would just be clipped on to the halter so it was easy to release him when he got to the gate. But if you weren’t ready for him, he would pull your arms out,” Banahan says with a laugh.

While the empty stall in the stallion barn will be a painful reminder of what has been lost, the Godolphin team can cherish their memories alongside hope for the coming years.

Banahan muses: “Bernardini was just one of those horses that never did anything wrong. They don’t come around very often.

“You usually get horses into the stallion barn who are going to take a little bit of looking after; they’re macho men. But he was just an absolute pleasure. Hopefully, we’ll get one who can replicate him in the future.”

FIRST PUBLISHED 4:26PM, AUG 7 2021
Bernardini was just one of those horses that never did anything wrong. They don’t come around very often

Rockonsoph scratching a seven-year itch for trainer Richard Morrissey 'Prize-money is ridiculous - but racing is a drug so you have no alternative' Buratino to switch from Kildangan to Hedgeholme for 2022 Seven-figure frenzy as Waldlied tops December Mares Sale at 2,200,000gns Nick Bradley turns bargain buys into 1,945,000gns worth of December Mares stars Registrations open for visitors to the Irish Stallion Trail