At The Sales NEW ZEALAND

International demand fuels strong trade on day one at Karaka

Godolphin make first visit to the auction a fruitful one 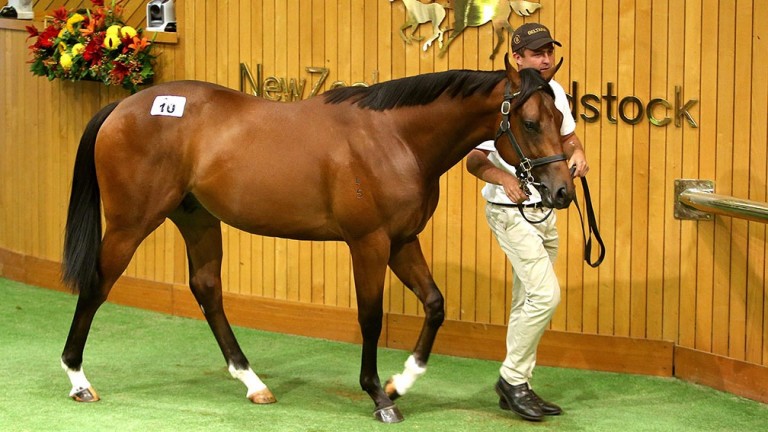 An amalgamation of the China Horse Club, Newgate Farm and Alan Bell Racing proved too strong on the day's top lot - an O'Reilly colt out of Volkrose who fetched NZ$825,000 (£478,054/€562,656) from the draft of North Canterbury's Beltana, while other high-priced offerings were knocked down to the likes of Hubie De Burgh, Adrian Nicoll, John Ferguson acting for Godolphin and Melbourne bloodstock agent Tim Stakemire on behalf of Sheikh Mohammed bin Khalifa Al Maktoum.

At the close of the first day, the statistics were positive for New Zealand Bloodstock, with NZ$30.3 million spent on 169 yearlings, up eight per cent on last year's first day tally, with visiting buyers responsible for NZ$20.8m or 69 per cent of the take.

New Zealand Bloodstock managing director Andrew Seabrook said the dominance of the international buyers reflected the esteem of which the New Zealand-bred thoroughbred had on the world stage.

"It's been a good start to the sale with the most thrilling aspect to me being the positive feedback from a highly regarded and astute buying bench," Seabrook said.

Beltana's Richard Rutherford was thrilled that his colt, a brother to Group 1-winning stallion Shamexpress from the final crop of champion New Zealand stallion colt O'Reilly, had sold so well, noting it was a fillip for the farm after a tough period through severe earthquake damage to his house, stables and farm infrastructure late last year.

"It was an all-round sensation and a huge relief after a difficult start to the year," Rutherford said. "He's been a lovely horse all the way through and we're thrilled that such a great group of people have bought him.

"It's a 40-hour journey for us to get up here but he handled the whole ordeal brilliantly and we're grateful to everyone who has contributed to us achieving such a result."

Shamexpress, now standing at Cambridge's Windsor Park Stud, has 19 yearlings in the premier sale and began promisingly with his highest-priced offering fetching NZ$360,000. The filly out of the Zabeel mare Fantasy World was sold to Queensland trainer David Vandyke from the draft of Jamieson Park.

The O'Reilly out of Volkrose colt was knocked down to bloodstock agent Michael Wallace but it was Alan Bell who fronted the media.

Bell, who raced multiple Group 1 winners Schillaci and Grand Armee and is currently enjoying success with quality three-year-old Star Turn, was taken by the colt.

"Simply put he looks like a racehorse should," he said. "Obviously the mare can produce a good horse and he's very much in the mould of his older brother. He's a superb mover with a great attitude. I'm a big fan of the stock that Richard breeds, as every year he produces a quality draft for the sale."

Wallace later went to NZ$600,000 to secure a Savabeel filly out of three-time Group 1-winning mare Daffodil from the draft of Waikato Stud on behalf of the China Horse Club.

"You know when you see a quality individual like this filly, with a pedigree to match, that it's not going to be a cheap exercise to buy them," he said.

Sheikh Mohammed's bloodstock advisor John Ferguson turned heads as he went to NZ$750,000 (£435,157/€510,505) for the Savabeel filly out of the outstanding racemare Banchee, who was presented through the Pencarrow Stud draft.

Ferguson outlasted a phalanx of interested parties as he secured the filly ahead of bloodstock agent Paul Moroney, who was acting on behalf of Sir Owen Glenn.

Ferguson said of his landmark first Karaka purchase: "We have well over 200 horses racing in Australia and we're constantly looking to upgrade our potential broodmare band.

"This filly has an impeccable pedigree and is from a hot young sire so it certainly made sense to try and buy her. We had a team look at her and they all said she was a quality individual, a very athletic type who was beautifully prepared, so I'm delighted to secure her."

Ferguson indicated the filly would be sent to the Sheikh's Godolphin racing operation in Australia and trainer John O'Shea.

"She was the one we wanted and we've been trying for a long time to get into this family," Stakemire said. "They don't come on to the market very often and it was well-documented that Sir Patrick [Hogan] was selling exclusively here and not holding anything back.

"You get the more classic types here and the sprinting types in Australia. We're happy to be supporting this sale. She'll be going to Australia, but we're not sure who will be training her yet."

Cambridge Stud's Sir Patrick Hogan rated the daughter of High Chaparral as his top filly of the sale.

"I'm very happy - that was my reserve so I got exactly what I wanted," he said.

BBA Ireland chairman Adrian Nicoll added his name to the high profile sales ledger with a decisive strike for a Fastnet Rock colt out of Frustrating, outlaying NZ$750,000 for the Curraghmore offering.

Frustrating is a daughter of prolific producer Parfore, the dam of Group 1 performers Tiger Tees, Terravista and Singapore Horse of the Year Super Easy.

"It's fairly obvious that if he can perform with distinction on the track his future would lie in the breeding barn," Nicoll said. "His dam produces high-class racetrack performers and he is by a champion sire so he has a lot going for him. He' s a very athletic type who looks like he will be able to run so I'm pleased to be taking him home.

"I've bought him for a group of existing clients and he will head to Australia for his immediate future."

Sydney bloodstock agent Duncan Ramage paid NZ$475,000 for a Curraghmore-consigned Frankel colt out of Give Me Five, while De Burgh Equine and Shadwell Stud went to $450,000 for a Snitzel colt out of Zenella from the Cambridge Stud draft and Netherlands-based Ger Beemsterboer signed for an I Am Invincible filly out of Different for NZ$425,000 out of the draft of Lime Country Thoroughbreds.

While Te Akau Racing's David Ellis didn't feature as a buyer on the top ten priced yearlings on the first day, he led the buying figures with 14 yearlings bought for $2.185m at an average spend of $156,071.

"It's been a very successful day's selling and I take my hat off to the whole New Zealand Bloodstock team and the vendors. I'm proud to be part of it all and am looking forward to more activity tomorrow," he said.

Last year's leading vendors Waikato Stud led the vendor by aggregate table with 21 yearlings sold for NZ$4.16m, with Cambridge Stud not far behind with 15 sold for NZ$3.78 million.

Fastnet Rock had a clear lead in the sires' category by average with seven yearlings sold for NZ$2.255m at an average of NZ$322,143, heading Snitzel's four yearlings, which averaged NZ$295,000.

FIRST PUBLISHED 4:23PM, JAN 30 2017
You know when you see a quality individual like this filly, with a pedigree to match, that it's not going to be a cheap exercise to buy them