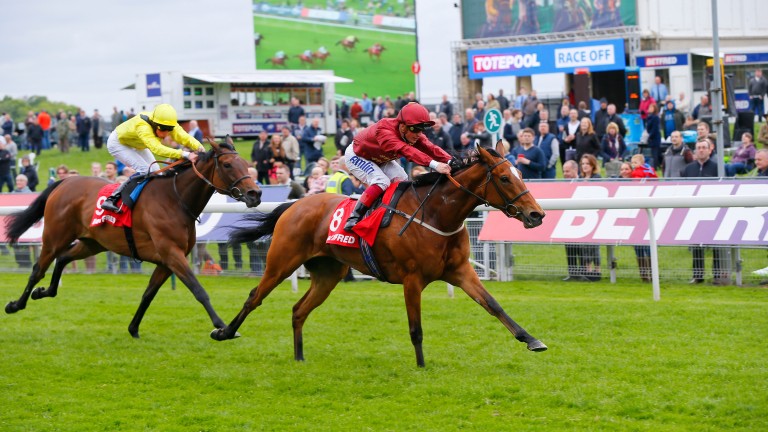 With buyers showing an insatiable appetite for quality fillies and mares and their 2016 foals, the Keeneland November Breeding Stock sale opened on Tuesday with key figures that soared well beyond the gross, average and median prices for the same session a year ago.

The 57 horses that did not sell represented 33 per cent of the total through the ring, compared with a not-sold rate of 30 per cent in 2015.

"I thought it was a very strong session with great international appeal," said Geoffrey Russell, Keeneland's director of sales, noting a strong Japanese presence among the buying bench.

"We had 10 $1-million horses this year instead of seven, with three over $2 million and a strong Japanese performance, many different buyers from Japan, too, not just one buyer.

Russell said buyers found they had to stretch to get horses they desired, but felt compelled to keep bidding.

"One major buyer told me, 'Well, I have two choices: either I stretch or I go home with nothing. I have to have product, so I'm going to stretch.' I think the quality of the catalogue reflected that. People realised going in that, for the quality that is here, you're going to have to stretch to buy them."

Monday's buying frenzy was led by most of the same players who had pushed Fasig-Tipton's November sale the previous evening to unexpected levels - Bridlewood Farm, Summer Wind Farm, SF Bloodstock and Newgate Farm, China Horse Club International, and the Japanese-based Shadai Farm and Yoshida family - joined by others such as Whisper Hill Farm and September Farm.

But it was Sheikh Mohammed's agent John Ferguson who came away with the biggest prize of the day, paying $3.5 million for a daughter of Coolmore's super international sire Galileo in foal to one of North America's perennial leading sires, War Front .

Consigned by Hunter Valley Farm, Secret Gesture was multiple Group 1-placed, including a runner-up finish in the 2013 Oaks - and competed in the 2014 and 2015 editions of the Breeders' Cup Filly & Mare Turf, finishing fifth and seventh, respectively.

Bred by Newsells Park Stud, the bay mare is a sister to Group 3 winner Sir Isaac Newton and a half-sister to stakes performer Maurus.

"She's a lovely mare and was an outstanding race filly in Europe from a beautiful family," said Ferguson, adding the mare will likely be sent to Europe. "From our point of view, she was a mare that could make the difference."

"It's bittersweet really. It was a great price and she's going to a great home," said Julian Dollar, general manager of Newsells Park Stud. "She's going to be mated well. We have two daughters we own and we have the mare, so we've got the factory, if you like. And we felt like if she made enough we could afford to let her go.

"It was a commercial decision really. But she was pretty special. It's sad to let those kind go. But it was a great price."

Hunter Valley's Fergus Galvin said Secret Gesture and Peace And War, a Grade I-winning daughter of War Front in foal to leading sire Tapit sold to Katsumi Yoshida for $1.45m , are typical of the horses most in demand.

"They're what the marketplace wants right now - young, with good pedigrees, great race records, and in foal to the right stallions," he said. "They both went comfortably past their reserves. Secret Gesture was owned by a partnership. They set the reserve and let it be known she was here to sell and were rewarded for that with a nice price."

The day's second-highest price of $2.55m was paid by Moyglare Stud Farm for Celestine, a daughter of the late Scat Daddy who this year won the Grade 1 Just a Game Stakes at Belmont Park and Grade 2 Honey Fox Stakes. The four-year-old filly has six wins from 14 starts with earnings of $825,100. She finished third in the Grade 1 First Lady Stakes before finishing 12th in the Breeders' Cup Turf Sprint.

Fiona Craig of Moyglare Stud signed the ticket and said the filly would head to Florida to go back into training with Christophe Clement. Celestine had been conditioned by Bill Mott.

The top price for a foal of $600,000 was paid by RC Thoroughbreds for a Pioneerof the Nile colt produced from the Grade 2-winning Vindication mare Dust And Diamonds. Both the March foal and his dam, who brought a bid of $1m, were consigned by Three Chimneys Farm as agent.

Three Chimneys was the leading consignor in the opening session, with 17 sold for a total $12,975,000. Ferguson's lone purchase made him leading buyer at $3.5m.

FIRST PUBLISHED 1:55PM, NOV 9 2016
She's a lovely mare and was an outstanding race filly in Europe from a beautiful family. From our point of view, she was a mare that could make the difference

'If I was a horse living in a paddock like this, I'd think life was pretty good'