Intello returning to Cheveley Park in 2018

Son of Galileo has been in France for two seasons 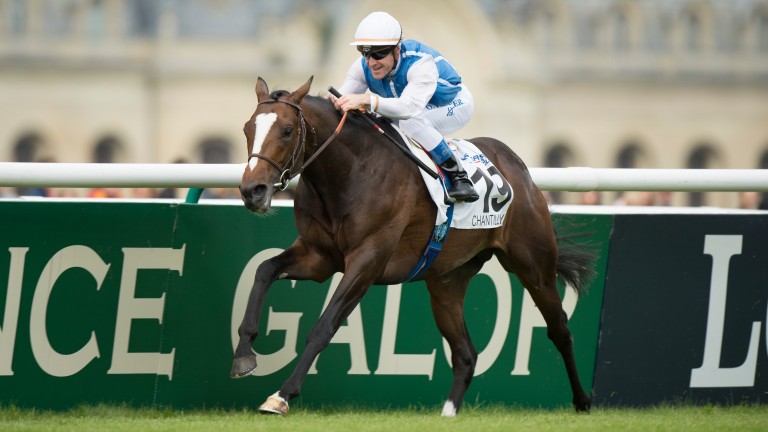 Intello, the 2013 Prix du Jockey Club winner, will return to Cheveley Park in Newmarket for the 2018 and 2019 breeding seasons, having stood the previous two seasons at Haras du Quesnay in Normandy.

"We are delighted, once again, to be standing Intello in England on behalf of his owners, continuing to make Intello available to domestic and international breeders alike," said Chris Richardson, managing director of Cheveley Park.

"Breeders' support, over the last four years, has been overwhelming. Indeed, he covered over 140 mares in France last year which shows the level of confidence there is about his future.

"Certainly all the trainers I have spoken to are very positive about the progeny they have by him."

Unbeaten in two starts as a juvenile, Intello proved to be one of the best European three-year-old colts of 2013. Having finished third in the Poule d'Essai des Poulains, he won the Prix du Jockey Club before confirming his speed by taking the Group 3 Prix Messidor over a mile, and finishing third in the Prix Jacques Le Marois over the same trip. On his final racecourse appearance, he demonstrated his versatility by stepping up in distance to finish third in the Arc behind Treve.

A Wertheimer homebred, Intello is by Coolmore's perennial champion sire Galileo out of the mile Group 2 winner and Classic-placed Impressionnante, a daughter of Danehill.

Intello has made an encouraging start to his stallion career. From only a small number of runners to date, his daughter Sonjeu won her first two starts, while Gabr finished a promising second on debut at Newmarket.

Intello has covered full books every year since his retirement to stud and – with juveniles in training with the likes of Sir Michael Stoute, Andre Fabre, John Gosden, Jean-Claude Rouget and Freddy Head – much can still be expected.

FIRST PUBLISHED 1:15PM, AUG 18 2017
Indeed, he covered over 140 mares in France last year which shows the level of confidence there is about his future