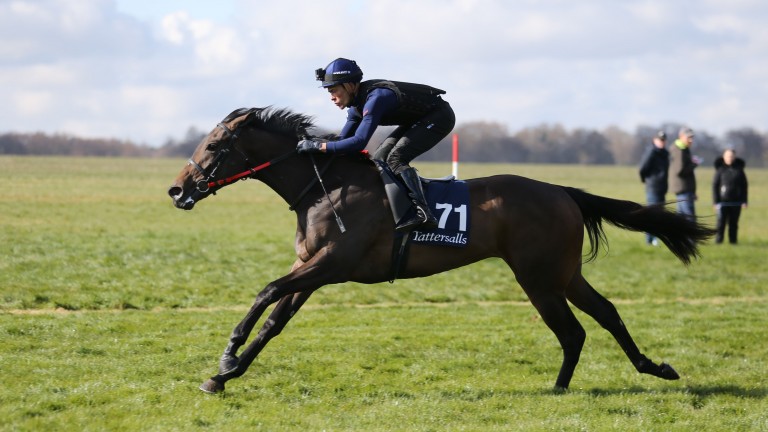 The nature of the breeze-up sales means buyers tend to be very selective. Bidding is usually highly competitive for those horses who breeze well and vet cleanly, but a sub-par two furlong performance invariably leads to a friendless time of it in the sales ring.

The Craven Sale was by no means exempt from this market phenomenon, but overall trade across the two days proved solid, particularly against a backdrop of an ongoing global health pandemic.

Arguably the most encouraging metric was the clearance rate, with 121 of 137 offered lots selling at a clip of 88 per cent, the highest at the Craven Sale since 2000. Just three lots went unsold while 13 were retained by their vendor.

This suggests that consignors are approaching the sales season with a degree of pragmatism, which can only help in moving stock on after a turbulent 12 months.

The clearance rate of 88 per cent also speaks of a healthy level of demand, which owes plenty to the incentives put on by Tattersalls. Indeed, the majority of buyers the Racing Post spoke to highlighted the draw of the new £250,000 Craven Royal Ascot/Group 1 Bonus, which is being run in tandem with the pre-existing £15,000 Craven Breeze-Up Bonus.

Both bonuses give purchasers a chance of recouping at least part of their outlay, something that is sorely missing when prize-money alone is being relied upon.

The importance of this sale being held in its traditional pre-Royal Ascot slot, something that was not possible last year because of the Covid-19 pandemic, also cannot be overstated.

Some 41 lots sold for a six-figure sum at the Craven Sale, including 13 by stallions with their first crop of two-year-olds this year.

The standout performer was undoubtedly Practical Joke, something of an unheralded name on European shores thus far as a son of Into Mischief who won three Grade 1s on dirt, but one we will be hearing plenty more about if recent results are any guide.

The Ashford Stud stallion supplied the 360,000gns sale-topping filly who was signed for by agent Alex Elliott on behalf of White Birch Farm, while Michael O'Callaghan also gave 140,000gns for a colt on day two, meaning Practical Joke's average stood at 250,000gns for two sold.

Those results followed hot on the heels of Coolmore purchasing an $800,000 Practical Joke filly through Jamie McCalmont and Ben McElroy at the Fasig-Tipton Gulfstream Sale, while another of his daughters topped the OBS March Sales of Two-Year-Olds In Training Sale when bought by Hideyuki Mori for $750,000. 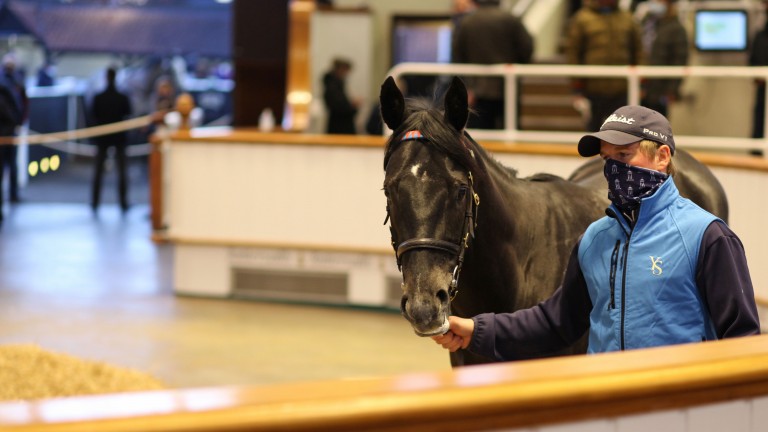 Caravaggio, who now stands alongside Practical Joke at Ashford having covered his first three books of mares at Coolmore Ireland, also enjoyed a fruitful sale, with five lots selling for an average of 112,400gns. The quintet was led by the colts out of Bright Sapphire, signed for by Sackville Donald at 240,000gns, and Like A Star, a 130,000gns buy by Mark McStay of Avenue Bloodstock.

The two other first-season sires to return a six-figure average were the National Stud's Aclaim, whose two lots fetched a mean price of 105,000gns, headed by the the colt out of Step Sequence bought by Opulence Thoroughbreds for 150,000gns, and Tally-Ho Stud's Cotai Glory.

The son of Exceed And Excel had three lots average 100,000gns, with Sackville Donald going to 130,000gns for the colt out of Jollification, while Blandford Bloodstock and George Baker combined at 110,000gns for the colt out of New Magic. Those transactions continued a productive week for Cotai Glory, who was represented by his first winner when Forca Brasil struck at Newmarket on Tuesday.

Honourable mentions must also go to Ardad and Profitable, with the former supplying a 100,000gns filly signed for by Charlie Gordon-Watson, while the later was represented by a brace of six-figure lots who fetched 100,000gns and 105,000gns from Michael O'Callaghan and Manor House Stud respectively.

The sole representative by the late Arrogate also sold well, with the colt out of Funny Moon going to Sackville Donald at 130,000gns

There were significantly fewer two-year-olds who had been pinhooked in the US in this year's Craven Sale catalogue, with only around 15 per cent of those who had previously been through a sales ring having come from across the Atlantic. In recent times the corresponding figure has been comfortably above 20 per cent.

This in itself was no great surprise, with Covid-19 travel restrictions meaning many British and Irish pinhookers were unable to make their annual pilgrimage to the major Kentucky yearling sales at Keeneland and Fasig-Tipton.

However, based on results from the Craven Sale, the British and Irish contingent will be chomping at the bit to get back to the US later this year as there was some eye-catching pinhooking profit to be had. 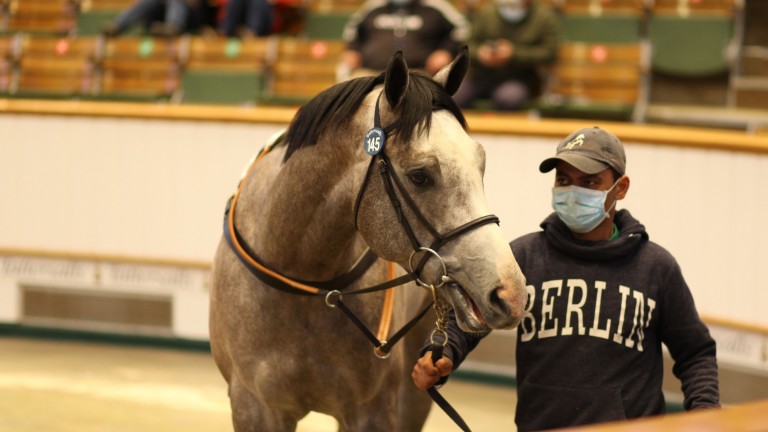 4. International investors out in force

Blue-chip bloodstock auctions like the Craven Sale have become events of global significance, but with travel restrictions remaining in place there was an understandable level of apprehension about how much international support the market would receive.

In the event, however, foreign investors had a significant part to play, with Tattersalls reporting that buyers from Bahrain, Dubai, France, Italy, Qatar, Saudi Arabia, Singapore and the US were all active participants, with the live internet bidding platform granting those who could not be at Park Paddocks in person access to the market.

Indeed, four of the ten most expensive two-year-olds were signed for on behalf of overseas owners. 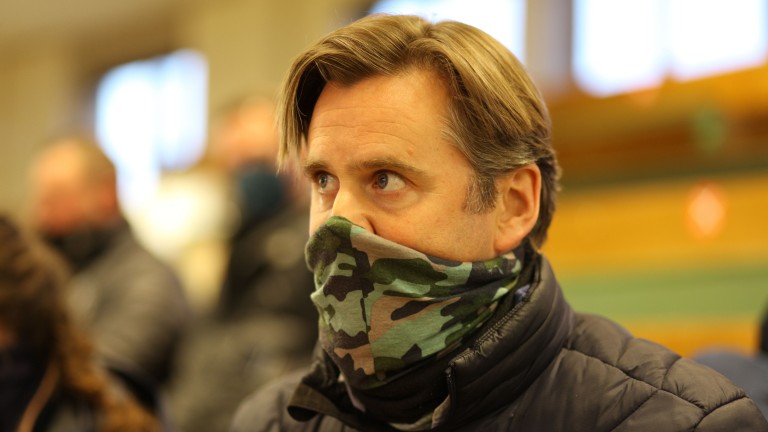 The top lot, the 360,000gns Practical Joke filly, is bound for the US having been secured for Peter Brant's White Birch Farm; the 240,000gns Caravaggio colt is set to ship to Hong Kong having been signed for by Sackville Donald; Kerri Radcliffe was acting on behalf of US owner Peter Leidel when she landed the 210,000gns Toronado filly named Babycri, albeit the horse is due to be trained in Britain, and Sheikh Abdullah Almalek Alsabah's 185,000gns Union Rags colt is another set to race in the US.

Although it was encouraging that such strong international participation was in evidence given how vital a role it has in underpinning the health of the market, it is also perhaps a sign of the times that many of the more sought after offerings are heading to race elsewhere, rather than being tested on the racecourses of Britain.

While this is clearly a matter of considerable concern, it is not entirely surprising given the chronic lack of prize-money rates a significant disincentive to domestic owners.

The majority of the key buyers at the Craven Sale are familiar faces on the breeze-up scene, from agents including Elliott and Radcliffe to the team behind the Cool Silk Partnership.

However, no buyer made a greater impact than a mystery online bidder signing as Manor House Stud, who topped the purchasing charts with eight lots secured for 1,035,000gns - ten per cent of turnover. 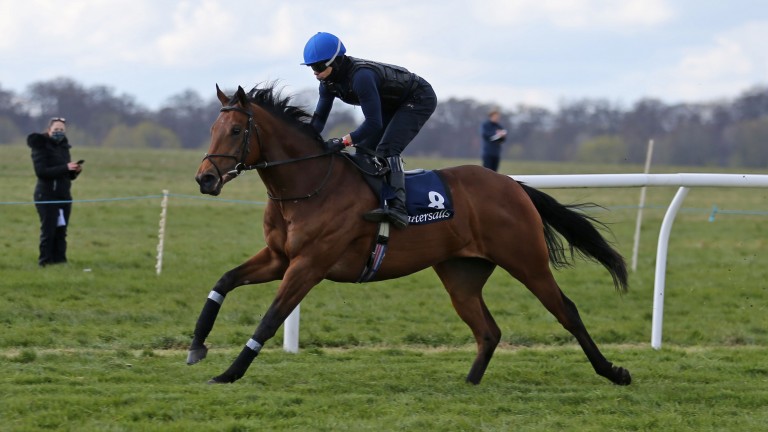 Lot 8: the Kingman colt out of Flying Fairies was purchased privately by Manor House Stud for 335,000gns
Laura Green

These included the 335,000gns Kingman colt out of Flying Fairies who was acquired privately on Tuesday, and also featured a 135,000gns son of Churchill and a filly by Iffraaj who fetched 110,000gns.

Manor House Stud in Middleham has a long and storied past, with 1945 Derby hero Dante born on the 289-acre property which belonged to Lennie Peacock, breeder of Guineas hero Tirol and Group 1-winning Redkirk Warrior, until her passing aged 97 in March 2018.

The farm, which was listed for sale online with a guide price of £2 million, is understood to have been taken over by an as yet undisclosed new owner. It seems likely all will be revealed when the horses reach the racecourse, so their progress looks well worth keeping a close eye on.

FIRST PUBLISHED 5:29PM, APR 15 2021
The clearance rate of 88 per cent also speaks of a healthy level of demand, which owes plenty to the incentives put on by Tattersalls