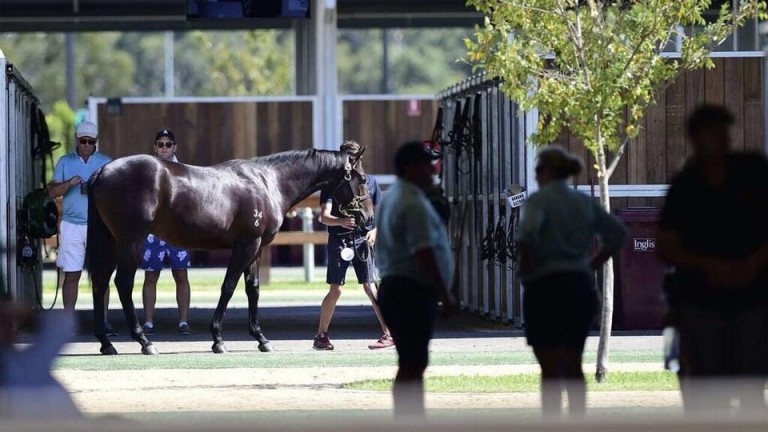 Inglis's Riverside Stables complex: numbers would be limited after resumption
Inglis
1 of 1
By Tim Rowe/ANZ Bloodstock News 12:28AM, MAY 16 2020

Inglis is confident it has approval from the New South Wales government to conduct live auctions in July, and the company is hopeful of gaining the green light from Victoria in order to hold its scheduled Melbourne sales in the same month.

NSW health minister Brad Hazzard on Thursday made amendments to the Public Health Act and specifically the Covid-19 restrictions relating to gatherings and people movement, which Inglis general manager of bloodstock sales and marketing Sebastian Hutch believes gives the company the go-ahead for its sales series.

Inglis has held a virtual Australian Easter Yearling Sale and Chairman’s offering in the past six weeks due to the government-imposed bans forbidding large public gatherings as agencies attempt to slow the spread of the coronavirus.

But under the new state government protocols, Inglis’s Australian Easter Yearling Sale Round 2 (July 5) and the Australian Weanling Sale (July 8) will be allowed to be held with buyers, vendors and horses in attendance at Riverside Stables.

“This is a recent notice and we are just digesting the information but that is our interpretation of it at this stage,” Hutch said.

“It is a fantastic outcome, should it be the case, for certainly breeders who intend on participating in our New South Wales-based auctions and it is vindication of the patience and the work done by a variety of people to enable this to happen.

“We’re committing similar work for our sales schedule at Oaklands.”

Under a revamped schedule, the Great Southern Sale, to be held on July 12 at Oaklands Junction, will precede the Melbourne Gold Yearling Sale after it was postponed from April.

Inglis management is liaising with Victorian stakeholders and government bodies in an attempt to achieve a similar outcome to that which Minister Hazzard has permitted.

Hutch said: “We’re not in any way complacent about the work that needs to be done to make this happen but it’s been at the forefront of our mind for some time.

“We’ve had constructive conversations with Thoroughbred Breeders Victoria and other industry participants in Victoria about what needs to be done to achieve a positive outcome and we feel like we’re progressing in the right direction.”

Inglis had a biosecurity plan drawn up for its April Easter sale with a 500-person limit before the government ordered the closure of a number of business sectors including pubs, clubs and auction houses to minimise people movement.

That template is likely to be called on for its Sydney and Melbourne auctions as will Inglis's online bidding platform which has been used to great effect in recent weeks.

“We're in the fortunate position whereby our online technology has demonstrated to readily be able to facilitate people who can’t be on the complex,” Hutch said.

“The expectation is that there will be people who will inspect stock on the complex and then potentially bid from home over the internet or on the phone.

“We also have the capacity to conduct certain elements of the auction in a digital fashion.

“To put it in context, since the end of March where we haven’t had a live auction, we’ve still managed to sell north of 1,170 horses for a gross of in excess of A$112 million.”

Hutch also revealed that the Easter Round 2 catalogue, made up of yearlings withdrawn or passed in from the April auction, would be boosted by some “appealing” additional supplementary lots.

He said: “It’s accepted by us that it’s a busy period for a lot of breeders and vendors, not only having to deal with the challenges of a dramatically rearranged Easter Yearling Sale but the subsequent demands placed by the reformatting of the broodmare sales series and the nature of the sales schedule across Australasia.

“It’s accepted that this is a hugely challenging time for these people and, as a consequence, we’ve been particularly patient in terms of trying to work with people to put drafts together and in making decisions. We understand that time is a precious commodity and they are trying to manage their time in what are very difficult circumstances.”

Inglis is expected to confirm the structure of its July sales schedule next week.

Meanwhile, entries closed yesterday for the Magic Millions Gold Coast National Sale, which the company plans to also be held as a live auction from July 20 to 24 and 28 to 30.

FIRST PUBLISHED 12:28AM, MAY 16 2020
We’re not in any way complacent about the work that needs to be done to make this happen but it’s been at the forefront of our mind for some time