Bruce Perry pounces on son of young Darley stallion for A$550,000 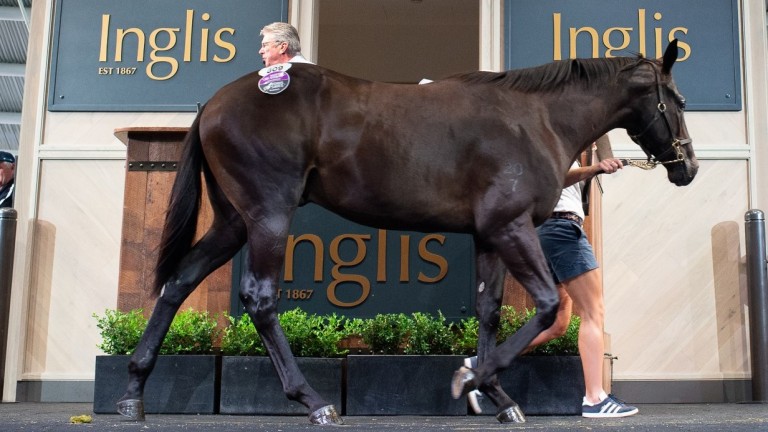 Murrulla Stud's Brazen Beau colt who became the highest-priced horse ever sold at an Inglis Classic Sale
Inglis
1 of 1
By Tim Rowe and Steve Moran of ANZ Bloodstock News UPDATED 3:25AM, FEB 13 2019

Some of New Zealand racing's biggest players have combined in an attempt to unearth a new stallion prospect by securing a Brazen Beau colt for a new Inglis Classic Yearling Sale record of A$550,000 (£320,600 / €344,700) on the fourth and final day of Book 1.

It was agent Bruce Perry who came out on top of the spirited bidding duel for the son of Darley's stallion Brazen Beau, after outlasting Laceby Lodge's Mick Gibson, but he would later land another colt by the exciting young sire for A$480,000.

The top-priced colt surpasses the previous Inglis Classic record of A$480,000 that was set last year by another Brazen Beau colt purchased by Orbis Bloodstock, who finished this year’s edition as the leading buyer by numbers and aggregate.

Perry revealed the top-priced colt was bought for a powerful group of investors, which include prominent owner Lib Petagna, Waikato Stud, Windsor Park Stud, James Chapman and the Carter family, among others.

“It's getting so hard for us in New Zealand to try and buy them on the way up. As soon as they win a trial here in Australia, they seem to have every man and his dog on them.

"For us in New Zealand we're trying to identify them at this early stage and back our judgment, otherwise we're not going to get these top horses, so this is how we have decided to do it."

The addition of the Brazen Beau colt to the partnership comes after Perry signed for an I Am Invincible colt at the recent New Zealand Bloodstock Karaka Yearling Sale on the partnership's behalf.

The colt, who was catalogued as lot 609, was subject to an important pedigree update when his three-year-old Epaulette half-sister Rock Dove won the Listed Strutt Stakes over 2,100m at Hobart on Sunday for Godolphin and trainer James Cummings.

The fifth foal out of the winning Dubawi mare Pouter, who is a half-sister to the stakes winner Excelltastic, the colt is a sibling to four winners from four foals to race, including Rock Dove.

Pouter was carrying the colt when she was purchased by Murrulla Stud's Tim and Celie Nolan for A$57,000 at the 2017 Inglis Australian Broodmare Sale from the Godolphin draft on behalf of clients Warwick and Annie Doughty.

But Murrulla's association with Brazen Beau stretches further back than this sale, with the operation having sold the dual Group 1 winner as yearling to Ontrack Thoroughbreds for A$70,000 at the 2013 edition of the Classic Sale.

"We were lucky enough to sell Brazen Beau as a yearling, who went on to win two Group 1s, so it is good for the farm to be able to buy a mare back in foal to him," said Tim Nolan.

"You've got to have a bit of luck and the filly Rock Dove looks pretty good and won a stakes race on Sunday.

"For big studs it probably happens all the time, but it is so hard to get a good colt like that and then for everything to go well with x-rays and scopes - so it is nice to get it across the line."

Nolan said they were weighing up whether to send the colt to last month's Magic Millions Gold Coast Yearling Sale, but after Monday's result was delighted they kept him for the Inglis Classic Sale.

"I have to give full credit to Warren, because I would have gone to the Magic Millions with him but he opted to come here and he has pulled the right rein," he said.

"Now he has got A$550,000 in the bank and he has definitely made the right decision because he stood out here. Bruce (Perry) said he waited for the one colt all sale."

Murrulla Stud sold ten lots during Book 1 for an aggregate of A$1,093,000 and experienced a few hits and misses during the extended Classic Sale.

"The nice horses have sold well - but it has been tough in other areas. The catalogue could have been trimmed up a little bit, but that is my personal opinion and I might be wrong.

"I guess some of our trade colts, who we thought will probably be breeze-up style horses, didn't make what we thought they could have, but then again the Brazen Beau colt has exceeded our expectations."

The Highway session, which has a catalogue of 205 yearlings, will be held on Wednesday at Riverside Stables. 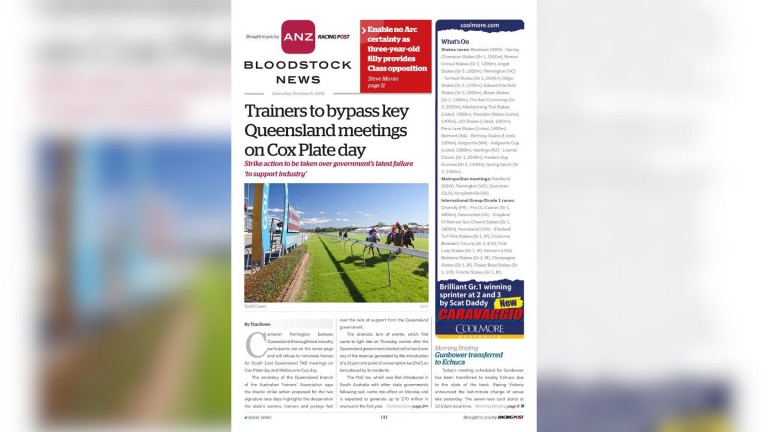 FIRST PUBLISHED 4:42PM, FEB 12 2019
For us in New Zealand we're trying to identify them at this early stage and back our judgment