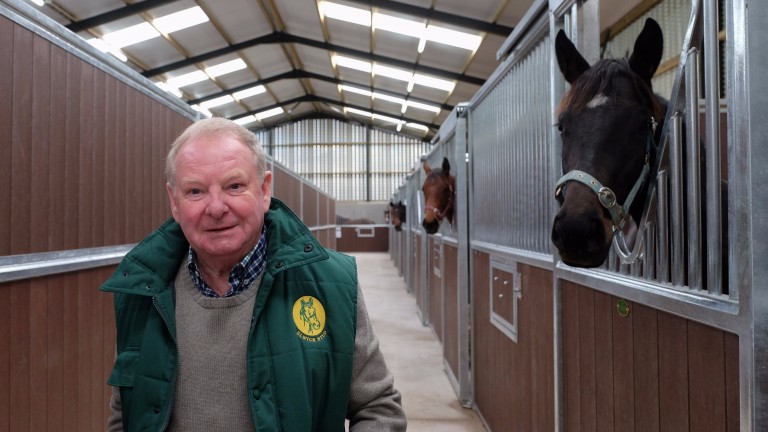 The landscape of Teesside may be dominated by the kind of industry that revolves around chimneys, refineries and an oil processing plant known locally as ‘The Cracker’, but over the hill and not too far away at Geoff Turnbull’s Elwick Stud a different kind of production line is about to come to life.

Under the care of owner, breeder and prominent industrialist Turnbull, Elwick Stud has received more than £10 million of investment that has seen the land developed from a working farm into a state-of-the-art breeding facility.

There are around 50 boxes spread between two locations, one to house mares, their foals and yearlings and Turnbull’s string while they are out of training, and just up the road is Elwick Hall and the stallion yard, which is currently vacant except for the grand designs the stud’s owner has in place.

Turnbull made his fortune from a hugely successful career in manufacturing, notably with his own GT Group. And although he recently sold his business to the German firm Knorr-Bremse Group for an undisclosed but not inconsiderable sum, the word retirement is something that means very little to the 70-year-old.

“There are ambitions to build, not one of the biggest studs in the world but one of the best,” he says from a sitting room adorned by photographs of his many racecourse triumphs.

There are plans for more boxes and more horses, which of course means more expenditure, but Turnbull and stud manager Gary Moore insist the new venture is one that places quality over quantity.

An example of this approach came at the Goffs Orby Sale when Turnbull parted with €270,000 for Barefoot Contessa, a Dansili yearling half-sister to French Classic winner Beauty Parlour from the coveted Wildenstein dispersal draft.

“I thought we’d have to spend more than that to get her, but the budget is there to be spent if we need it,” Turnbull says, before noting that some of the potential stars of his broodmare band are still revealing their true potential.

“We’ve got a lot of quality fillies coming through. We’ll have more than 30 fillies in training next year and I’d hope maybe ten of those will prove good enough to join the broodmare band. I’d expect Reachforthestars to be a Group horse before she retires.

“That’s the kind of quality we’ve got and that’s the route we’re taking. It’s an enjoyable route if you get it right but it’s frustrating if you don’t because you have to compensate by buying. Although if the right filly or mare comes up, we’ll definitely buy.

“The early target is 100 horses; we’ll probably hit that at the end of this year and, if not, definitely by the spring of next year. You’ve got to have the structure and the quality with the mares, so that’s what we’ve been concentrating on as a young stud going forward. Getting the standard of the mares up to what I call world class isn’t easy.”

Easy it may not be, but that has not stopped Turnbull trying, and at this month’s Tattersalls December Mares Sale he added Kalinova, a Red Ransom half-sister to Soviet Song in foal to Camelot, at 50,000gns, and Sibaya, an Exceed And Excel half-sister to St Leger hero Harbour Law in foal to Nathaniel, at 26,000gns to his burgeoning band of broodmares.

However, perhaps the boldest aspect of his plans for Elwick Stud is not the number of mares Turnbull plans to house but the fact he also intends to stand his own stallions.

There are plans in place for as many as four stallions to reside at Elwick Stud in due course, but at the moment the only intended occupant of the stallion yard located a short drive away from the main yard is the apple of Turnbull’s eye, Mondialiste.

It had been a close call as to whether the son of Galileo would be retired to stand at Elwick in 2017, but eventually the decision was reached that trainer David O’Meara would get another roll of the dice with the soon-to-be seven-year-old.

Such is the enthusiasm Turnbull displays for his dual Grade 1 winner that it is hard not to feel that his desire to see the offspring of the globetrotting Mondialiste one day carrying his familiar blue and pink silks could well have been be a big contributing factor in his desire to expand the stud.

“I couldn’t believe he was going to sale,” Turnbull explains of how he came to own the regally bred horse. “He didn’t look in the best condition when I saw him. There’s no doubt that Freddy Head is one of the best trainers in the world but he’d been using him as a pacemaker and already had some fantastic horses in his stable.

“When you have only one of them it makes a difference as you concentrate on them a lot more. It’s made a big difference to the horse to get him settled, just letting him run around the field. When we first got him you couldn’t go in the stable with him.

“We’ve already had plenty of interest from people wanting to send mares to him, and not just from around here.”

Despite his clear affection for Mondialiste, it is not just blind admiration that drives Turnbull, although he says backing your own judgement is immensely important. It was his own intuition than led to the purchase of Mondialiste, and that may be a good omen for one of Turnbull’s potential stars in 2017 in Kings Gift.

Turnbull went to €52,000 for the son of Casamento despite the protestations of those whose opinion he normally relies on. The maverick move certainly looks to have paid dividends as the two-year-old ended his season with a fine second in the Horris Hill Stakes, as the highest-rated progeny of his sire by Racing Post Ratings, and with the profile of a horse who looks nailed on to become an even better three-year-old.

“I spotted him as a foal over in Ireland. I just loved him and said I was going to buy him,” Turnbull explains. “Paul Mulrennan got off him and said ‘this is the best two-year-old I’ve sat on this year’. They were lovely words to hear – we’ve still not seen his full potential, not even close.”

Turnbull, who has horses in training with Michael Dods, O’Meara, Kevin Ryan, Tim Easterby and Jedd O’Keeffe, is unequivocal about the prospects of the north as a powerhouse within the thoroughbred industry and is determined to make his contribution a lasting one.

“I can’t see my horses going out of the north,” he says. “The standard of training up here is second to none. I’ve got a good relationship with the people around here,” before he concedes that his ambitions do not lie solely within the area in which he was born and raised.

“But I exported more than 95 per cent of everything I made in manufacturing and horseracing isn’t a parochial thing either. It’s international; if a trainer wants to take a horse to anywhere in the world it’s just the same as going to Catterick as far as I’m concerned.”

At a time when the number of owner-breeders is decreasing and those aiming to breed for the sales ring and not the racecourse are seemingly having a growing influence on the breed, a short spell in the company of Turnbull highlights that there are individuals out there still willing to make investments based primarily on their love of the sport and the thoroughbred.

“I just love horses,” he says. “I’ve been doing it for 17 years as a hobby, racing horses and breeding. The first horse I bred was Rising Prospect [out of his seven-time winner La Sylphide] and he won first time out at York. We entered him for the Derby after that; beginner’s luck!

“During the years I spent working in the commercial sector I used to drive past the stud staff on my way to work and think ‘I wish I was doing what you’re doing’.

“I’ve had a great life and I’ve enjoyed what I’ve done in manufacturing but now I’ve got the bit between my teeth with this, the stud is my main thrust.

“I’m not risk averse but this will be run like a business and I expect a return on my investment. I’ll strive to be the best in the world but it’s a long-term thing.”

They say that you should never mix business and pleasure, but if you can make your business your pleasure and vice versa there is no telling how far you can you go, and that is precisely the position in which Turnbull finds himself.