Auction takes place on Saturday, May 19 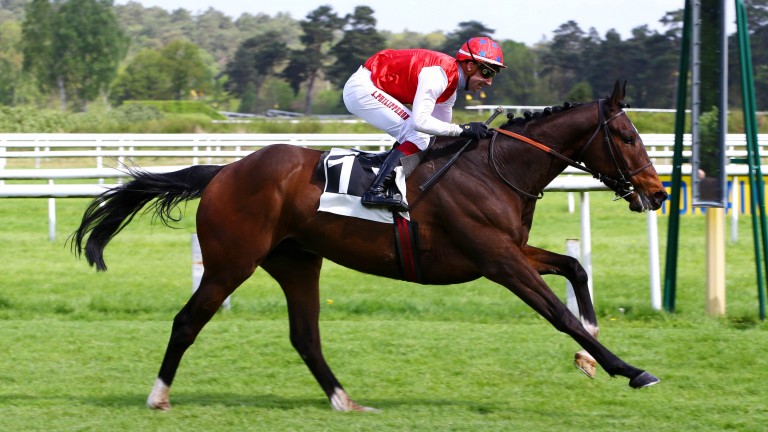 Vision D'Honneur: among the exciting lots on offer at the upcoming Auteuil Sale
APRH / Quentin Bertrand
1 of 1
By Ollie O'Donoghue 6:27PM, MAY 4 2018

Arqana have unveiled 13 initial entries for the company's inaugural Auteuil Sale, which takes place in the parade ring 30 minutes after the last race on Saturday, May 19.

The auction takes place on the weekend of the Grand Steeple-Chase de Paris, the French equivalent of the Cheltenham Gold Cup.

The impressive debut winner Vision D'Honneur will sell as lot 5. The son of Vision D'Etat and half-brother to Grade 1 performer Le Martalin scored by three and a half lengths over 3000 metres at Fontainebleau in the care of Robert Collet.

A three-year-old gelding by Redoute's Choice, Festivalier, is lot 11. Trained by Carlos and Yann Lerner, he ran third on both his starts at Auteuil over hurdles, only finding the highly regarded Pic D'Orhy and Goliath Du Berlais too good in the Prix Go Ahead hurdle at the end of April.

Joel Boisnard will offer two of his charges, headed by three-year-old Authorized gelding Great Authority (lot 4). This half-brother to stakes winner Dartagnan D'Azur ran second on his hurdling debut at Nantes. As for Sansiro (lot 9), he is undefeated in two starts over hurdles this year. After winning by 15 lengths in Angers, this four-year-old Rajsaman gelding doubled up at Toulouse in early April.

FIRST PUBLISHED 6:27PM, MAY 4 2018
The auction takes place on the weekend of the Grand Steeple-Chase de Paris, the French equivalent of the Cheltenham Gold Cup