Impact on top during red-hot yearling session of JRHA Sale

A record total of 15 lots fetched ¥100 million or more 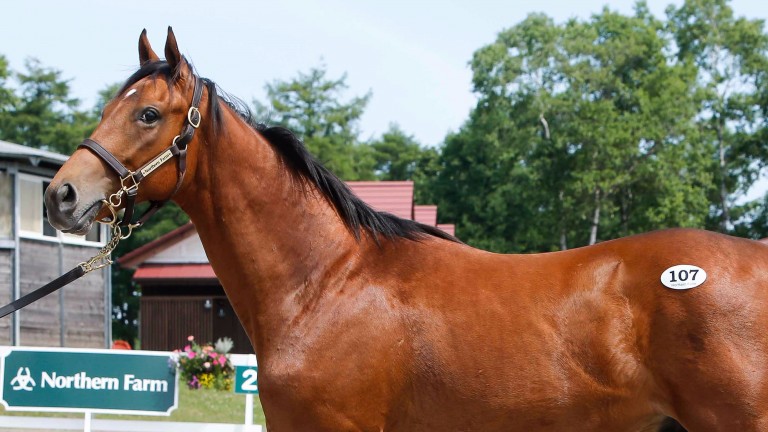 With bidding inside the Northern Horse Park sale pavilion even more torrid than the stifling heat wave suffocating the island of Hokkaido, the Japan Racing Horse Association Select Sale surged to more unprecedented territory during the opening yearling session on Monday.

"This is no doubt a better market than I expected," said Katsumi Yoshida, whose Northern Farm sent a dozen horses through the ring for ¥100m or more. "Honestly speaking, I didn't expect this year's session to surpass last year's because last year was so good."
An array of established Japanese owners joined with relatively new buyers and international racing participants eager to obtain Japanese thoroughbreds to fuel the session furnace.

Competition was so stiff that billionaire businessman Hajime Satomi had to pay significantly more than he planned in order to acquire the one horse he most wanted from the session - a colt by leading sire Deep Impact out of Fillies’ Mile winner Listen for ¥270m (£1,837,130/€2,076,150).

"This is the colt I wanted today," Satomi said shortly after posing for photos with the big, handsome bay. "The price was a bit more than I thought it would be. Today's market is very hot - too hot. I expected to pay ¥230 million, so ¥270 million is a bit expensive."

Satomi, chairman of gaming giant Sega Sammy Holdings, was presented with three gold medals prior to the sale session for the Grade 1 wins achieved by his prior JRHA sale purchases Satono Diamond, Satono Crown and Satono Aladdin.

"I hope this colt will be another good one from the JRHA," Satomi said while surrounded by media after he bought the session-topper.

An owner for 25 years, Satomi achieved his initial Group 1 victory in October 2016 when Satono Diamond scored in the Kikua Sho (Japanese St Leger) and now he has plans to snare the Prix de l'Arc de Triomphe with that four-year-old son of Deep Impact bred by Northern Farm.

The cross of Deep Impact with Listen has now produced a pair of JRHA yearling session-toppers, following the now four-year-old New World Power, who was purchased by Sheikh Fahad Al Thani for ¥260m in 2014. New World Power has placed three times in Britain and is in training with David Simcock.

Listen, who was raced by Coolmore and is from the family of Henrythenavigator and Magician, was acquired privately by Yoshida from the Irish operation and has proved a jewel in Japan.

Matings of Listen with Deep Impact have yielded not only the high-selling colts but also Grade 2 winner and Grade 1-placed Touching Speech, a now five-year-old mare, and multiple Graded-placed Move The World, a three-year-old filly. Both those runners have been campaigned by the Northern Farm-affiliated Sunday Racing club.

Listen also has an unraced juvenile daughter by Deep Impact named Rinforzando and she produced a colt by the sire this spring.

Deep Impact, who has been the driving force at the JRHA sale since his first foals came to market in 2008, once again reigned supreme as the sire of the top four highest-priced individuals and eight of the 15 who topped the lofty ¥100m barrier.

Before Satomi concluded his bidding with the acquisitions of five yearlings for a total of ¥525m, he had added a Deep Impact filly out of American Grade 1 winner Heir Kitty, by Wildcat Heir. His other intriguing purchases included a filly by promising Japanese freshman sire Lord Kanaloa out of US champion Stardom Bound, by Tapit. 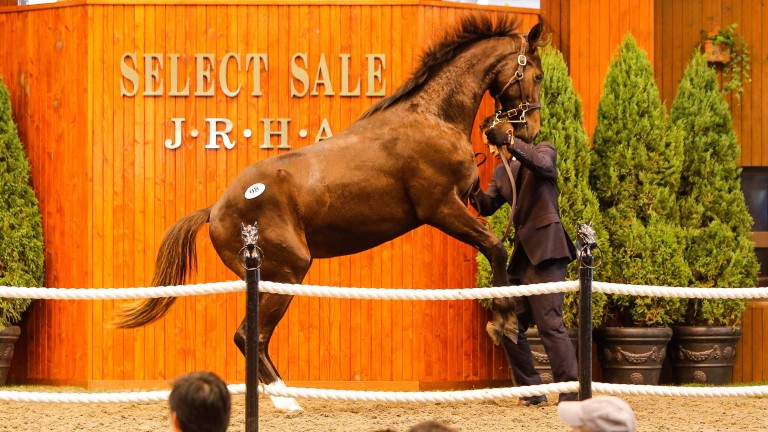 Lot 98: the Deep Impact colt out of US Grade 1 winner Champagne D'Oro showing off before being sold for ¥195 million to Inzel Co on behalf an unnamed client
Michele MacDonald

The very first colt by Deep Impact to enter the ring, trotting in just a few minutes after the opening hammer fell, sparked dramatic fireworks that set the session on its sparkling course.

A solidly made half-brother to Irish Derby runner-up and Australian Group 1 winner Seville, went well past his ¥100m reserve when purchased by Masaaki Matsushima under the name of his Kyoto automobile dealership Kieffers for ¥260m.

Matsushima said his long-term goal for the colt is nothing less than to win the Prix de l’Arc de Triomphe and he hopes his friend, legendary Japanese jockey Yutaka Take, will be in the saddle to accomplish that feat.

"This is my dream," said Matsushima, who had to fend off Satomi to secure the bay, who is out of multiple French Group 3 winner Silverskaya, by Silver Hawk.

Another mare previously owned by Coolmore and acquired by Yoshida for his over 700-member Northern Farm broodmare band, Silverskaya has delivered seven foals in Japan. Her 2015 colt brought ¥120m at the JRHA foal session but is unraced to date.

The lot, who was purchased for ¥250m under the name of Masahiro Noda’s business software enterprise Danox Co, was produced by Irish 1,000 Guineas winner Samitar, an Albany Stakes winner who also was runner-up in the 2011 Fillies’ Mile and later Grade 1-placed in the United States.

Noda, who like Satomi is one of Japan’s wealthiest entrepreneurs, bought five blue-blooded yearlings during the session for a total of ¥611m, making him the leading buyer for the day. His purchases included two others by Deep Impact: a filly out of multiple Argentine Group 1 winner Life For Sale, by Not for Sale, and a colt out of multiple British stakes winner Ripples Maid, by Dansili.

Additionally, Noda purchased a colt by Heart’s Cry who is a half-brother to Belmont Stakes winner and young US-based stallion Palace Malice, for ¥135m.

But the Noda family spending did not stop at that already dizzy level, as Noda’s wife, Mizuki, contributed another ¥265m on three yearlings, including a Deep Impact colt out of European champion sprinter Fleeting Spirit who cost ¥100 million.

While domestic buyers and sellers dominated the JRHA sale, there was also plenty of international participants during the yearling session.

Sheikh Fahad was both a buyer and a seller, having consigned the Deep Impact colt out of Ripples Maid through Mishima Farm, where he boards his Japan-based mares.

Later in the session, after being outbid many times in the heat of the day, Sheikh Fahad and his bloodstock advisor David Redvers prevailed for an athletic filly by Harbinger. The chestnut was produced by the Admire Moon mare Luna Regalo, a half-sister to three Japanese stakes winners and a granddaughter of multiple champion Dyna Carle.

"Is there a stronger bloodstock market anywhere in the world? I don't think so," Redvers said after signing the ¥56m ticket and posing with Sheikh Fahad and the filly.

"She’s a beauty," he added of their purchase, noting that the price was well above what they had hoped to pay. "We got outbid so many times that when our favorite physical came up, Sheikh Fahad kept going. She looks like a very fine colt, so that's good." 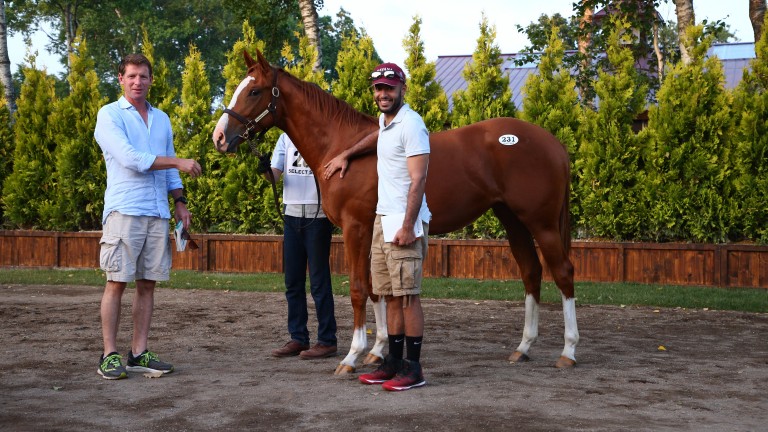 David Redvers (left) and Sheikh Fahad pose with the Harbinger filly they secured for ¥56 million
Michele MacDonald
Just before the session ended, Sheikh Fahad - who was the leading buyer at the 2014 JRHA sale - returned to purchase a filly by Black Tide out of the Monsun mare Soyokaze, who is from the female family of champion and sire Cadeaux Genereux. A brother to Deep Impact, Black Tide is a success in his own right, having sired 2016 Japanese Horse of the Year Kitasan Black.

Sheikh Fahad acquired the Black Tide filly for the relative bargain price of ¥8m (£54,420/€61,495) from the Shadai Farm consignment.

Black Caviar's owner is all Heart

Among other international buyers was Australian Neil Werrett, who rose to racing prominence as a co-owner of undefeated champion Black Caviar and as part of the Vinery Stud syndicate that bought her champion half-brother All Too Hard for around A$25m.

Werrett has been involved in Japanese business and real estate for almost 20 years and founded Galileo Japan Funds Management Limited in 2006. Agent Mark Player signed a ¥25m ticket for a Heart’s Cry filly from the family of Japanese dirt champion Vermilion, on Werrett’s behalf.

"He has a real love of Japanese racing, so we'll put a toe in the water and see how it goes," Player said of Werrett, who did not attend the session. "She's a lovely filly and Heart's Cry has been such a good sire. The Japanese horses are so strong and they've proven they can compete anywhere in the world."