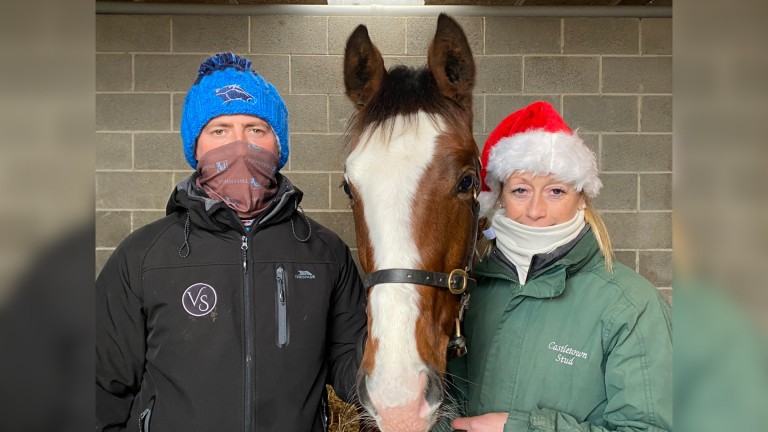 The final foal through the ring at Goffs on Sunday evening will be led up by a familiar face, with none other than Mrs Claus set to present Vinesgrove Stud's well-bred Dark Angel colt.

Behind the Christmas mask and festive outfit will be another familiar face to many sales attendees in Brenda Shortt, who has led up many a star down the year's, mainly for Joe Hernon’s Castletown Stud.

Shortt is raising money for mental health charities, with the woman known as the mammy of the sales aiming to help spread some Christmas cheer during a difficult December.

"I like to make everybody smile and feel good," said Shortt. "I have been doing this for over 30 years and this year has been a particularly rough, tough year for everyone in every community, and not just our own. I wanted to do something to help make people smile and forget about their troubles for a few minutes." 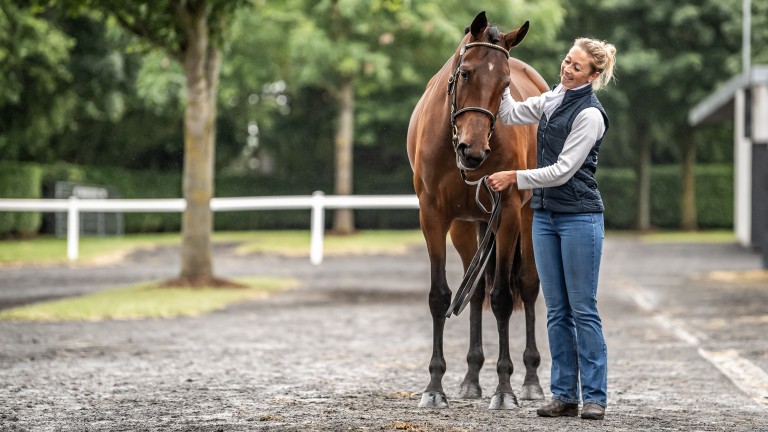 Brenda Shortt in her regular sales attire during the 2019 Goffs Land Rover Sale
Sarah Farnsworth
The impact of the pandemic on the ability of charities to raise money to cover the vital services they provide has been devastating, and conscious of the effects of lockdowns, isolation and anxiety over Covid-19 on people’s mental health, Shortt decided to set up a GoFundMe page to do her bit to help. The response has been overwhelming, with over €1,000 already donated.

"Already the target has been reached, which is incredible and has surpassed all my expectations. The support from people has been amazing and I would like to thank Billy McEnery (Vinesgrove Stud) and Henry Beeby at Goffs for their support and help,” she added.

McEnery’s colt foal by Dark Angel is a brother to Group 3 Prix des Chenes winner Stage Magic out of a half-sister to the Grade 1 Breeders’ Cup Turf winner and Darley Japan sire Talismanic. McEnery, who runs Vinesgrove Stud with his father Paul, didn’t hesitate when Shortt came to him with the idea.

“I think it’s a good idea as mental health is a major issue and this year with the pandemic and the financial problems that people are facing, so many people are worried about themselves so it’s great that Brenda is thinking of others and helping to raise money and awareness,” McEnery said.

The fundraising initiative has the support of Goffs, and group chief Executive Henry Beeby remarked: "It’s a novel idea and I applaud Brenda for doing this and Billy McEnery for allowing her to lead up the foal.

"We are delighted to facilitate this fundraising appeal. Brenda is raising money for mental health charities and in this year of all years, it's so important that they receive support."

When asked if he would be joining in the festive fun Beeby said with a smile: "You never know what might happen!"

The sale will be live streamed on Goffs' website and Shortt’s GoFundMe page will remain in operation until the end of December. Those wishing to make a donation can visit Shortt's GoFundMe page here.

FIRST PUBLISHED 1:38PM, DEC 19 2020
I have been doing this for over 30 years and this year has been a particularly rough, tough year for everyone