'I think getting it right at any level is very satisfying'

Bloodstock agent Alex Elliott is in the hot seat 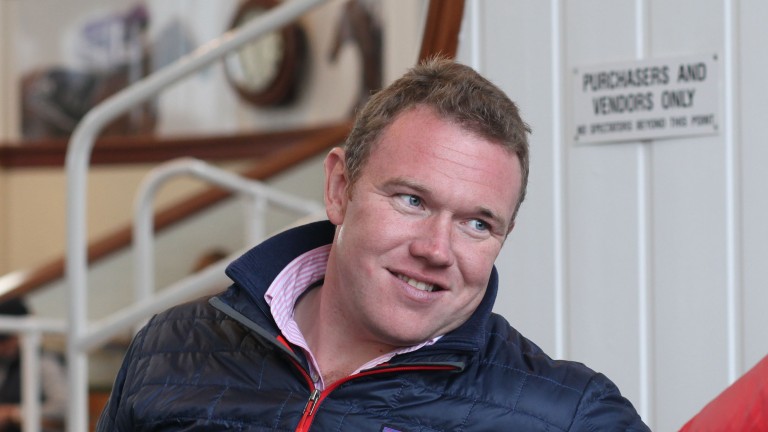 Alex Elliott: regards Supasundae's win in the Coral Cup as the highlight of his career to date
Laura Green
1 of 1
By Ollie O'Donoghue 7:07PM, MAY 12 2017

Times are a contentious issue at the breeze-up sales, are you a believer and do you think the information should be made publicly available? I believe that the times are a vital tool and I'd make a lot more mistakes without them. I don't think they should be made public, though. They're public in the US and I think it contributes to the very low clearance rates there. Time is much more relevant there because there are so many fewer variables in their racing.

Can you give us an up-and-coming sire to follow? Intello. He was a great racehorse and has the looks and pedigree. He won over eight to 12 furlongs, and is one I think will make an impact. A lot of the first-season horses haven't really caught my imagination so far.

Which stallion do you think does not get the credit he deserves? Fast Company. In his first season he had Baitha Alga who won the Norfolk Stakes at Royal Ascot, and he's had Jet Setting. He's only in his fourth season [with runners], and for €7,000 you get good-looking, durable racehorses. I think he's better than his stud fee would suggest.

If you had to let a fellow agent buy you a horse who would you choose? A good friend of mine, Ben McElroy, who's based in Kentucky. He gets it right in the sales ring and on the track, in both Europe and North America where I do most of my business.

He's had some great success in the US, and pinhooking on the track. He had Pathfork in Ireland - he might have been champion two-year-old but for bumping into Frankel, and he had Firing Line, who was second in the Kentucky Derby.

And who would you want to train and ride it? Jessica Harrington, who must just have the most innate feel for horses. You could literally buy anything and she would get the best results, whether that's a two-year-old, stayer on the Flat or a jumper. I think she's just an incredible horsewoman.

I've seen a lot of jockeys around the world, and I think Ryan Moore is the best Flat jockey I've witnessed. Noel Fehily is as close to him over jumps at the minute. He doesn't make any mistakes, he's always in the right place at the right time. They're both fairly faultless.

Who has been the greatest influence on your career? There's too many to name really. The one constant has been my auntie and godmother Gill Richardson. She's been a highly successful agent and could make silk purses out of sow's ears.

What aspect of your job do you most enjoy? If a horse ever increases in value, then I've done my job for the client. I think getting it right at any level, for someone who has shown faith in my judgment, is very satisfying.

Best day in the business? Seeing Supasundae, who I bought privately, winning the Coral Cup at Cheltenham was very satisfying. He's got an amazing story, that horse. He was a 200,000gns yearling from Newsells Park, not sold, and went into training with Jeremy Noseda. Then, he went through the ring at Doncaster and made £5,000. Next, he won a bumper and made £50,000, and finally he won another bumper and I bought him privately for Alan and Ann Potts. He's been all over.

I also bought Pleaseletmewin for £30,000, and he was sold for £450,000 after winning a Group 3 at the end of his two-year-old career. So I've had a lot of great days, it's just that elusive Group 1 that's proving a thorn in the side at the minute!

What has changed most during your time working in the bloodstock industry? I haven't been around for very long, but I think it's going to be more and more apparent that some major superpowers throughout the game are combining with big partnerships, which I'm not sure is beneficial or detrimental, but you see it more and more now from owners that could be big in their own right.

It's very hard for somebody like me, because if I've got a very good order from one single buyer you're running into these global partnerships. It's very hard to buy the best stock, and it's becoming more competitive at the top.

Give us a dark horse to follow for the Flat season? There's a horse I bought in Deauville for quite a lot of money called Slipstream, a two-year-old Invincible Spirit colt that's in training with George Scott. He's probably one of the best looking horses I've ever bought and is one that you would be dreaming about.

If you weren’t working in bloodstock, what would you be doing? Since I started, I've always wanted to train. My whole CV is working with trainers like Philip Hobbs, Christophe Clement, Sir Michael Stoute, Eoin Harty, and it was training, training and more training. I think it's helped enormously in my new career, but I do miss the hands-on side of things, with the training and competition, and I don't think there's anything that could beat it.

FIRST PUBLISHED 7:07PM, MAY 12 2017
I don't think the breeze-up times should be made public. They're public in the US and I think it contributes to the very low clearance rate there