'I couldn't stop watching the video, he nailed it' - Quality Road colt dazzles 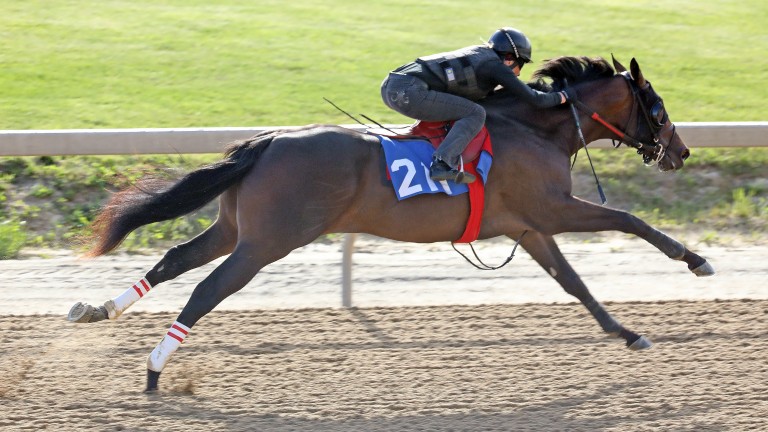 The Quality Road colt's bullet breeze turned heads at Fasig-Tipton Midlantic Sale
FasigTipton Photos/Photos by Z
1 of 1
By Michael Compton/Molly Robins of Bloodhorse 11:11AM, MAY 18 2021

When the dust settled on a spirited round of bidding for Hip 211, a colt by Quality Road, during the opening session of Fasig-Tipton's Midlantic 2-Year-Olds in Training Sale on Monday, Terry Finley's West Point Thoroughbreds partnership prevailed over Amr Zedan of Zedan Racing Stables to take home the $1.5 million session-topper.

Bred in Kentucky by Jon Clay's Alpha Delta Stables, the colt, out of the unraced Storm Cat mare Stormy Welcome, a half-sister to the dam of Graded stakes winner Guest Suite, is a half-brother to stakes-placed Welcoming.

The colt's third dam is Weekend Surprise, one of the greatest blue hen mares of all time. By Secretariat, Welcome Surprise, the 1992 Broodmare of the Year, is the dam of Horse of the Year and influential sire A.P. Indy and Classic winner Summer Squall, among many others. This is also the family of Grade 1 winners Happy Saver and Court Vision.

Consigned by Eddie Woods, agent, the precocious dark bay or brown colt breezed a co-bullet eighth-mile in :10 at the under tack preview.

"We love Eddie and his team, and we just thought he was a very, very good prospect," said Finley, who related that an undisclosed West Point partner has taken a 50 per cent interest in the colt. "I stay away from [saying] 'he is the best horse in the sale' because nobody ever knows. But I think he is a very good prospect.

"Most of the horses that we buy at the yearling sales, we send them to Eddie. We've had really good luck buying from him over the years. And he just said [about this colt], I think the term he used was 'a proper horse.'"

Woods elaborated on what makes a proper horse, saying, "A proper horse is a horse that has all the attributes of being a very good horse mentally, physically; the way they move, the way they handle themselves. You see them up here in the back ring and they can walk beside you without a shank on them. He's been like that since he came to us. I wish they were all like him."

The session-topping colt left an indelible impression on both Finley and Woods following his outstanding performance at the breeze show, in which he signalled his ability. Finley later said the colt will be trained by Dallas Stewart.

"He's a big, strong horse that worked in :10 flat," Finley said. "You take a look at him and he's not supposed to work that fast. He did it the right way."

Woods, who sold the colt for his breeder, added: "I expected him to work really, really good, like the top work. And it doesn't always happen, but he did, he nailed it, and he galloped out fantastic.

"When I came back and watched the video about half an hour later, I couldn't believe it. He's the best video I have had on a horse in the last five or six years. I mean, I couldn't stop watching it. He just nailed it. And that's why he brought what he brought."