International CUE THE NEXT ONE

'I am so proud to be the breeder of Cue Card'

Rowland Crellin bred the popular jumper out of Wicked Crack 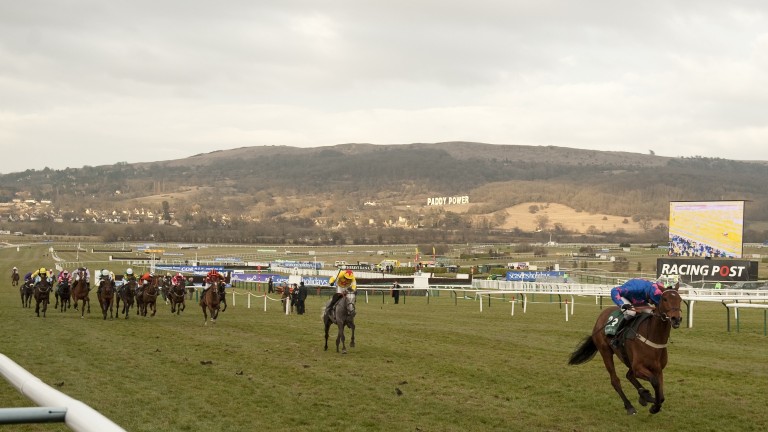 While Cue Card's racing days are now behind him as he embarks on a happy retirement at Colin Tizzard's Venn Farm, his legacy will live on through his three female siblings, all of whom are still in the care of his breeder Rowland Crellin.

The popular jumper helped put his sire, King's Theatre, on the map with his 40-1 upset in the Champion Bumper in 2010 adding to the success of Menorah in the previous day's Supreme Novices' Hurdle.

He is one of two winners out of Wicked Crack, a daughter of King's Ride who won six races and placed four times in Grade 2 company, as well as departing at the first fence in the 2002 Grand National.

"He was a gorgeous foal when we had him here and he's obviously played a great part in my life," said Crellin.

"When he was born I could not believe my luck, he was Wicked Crack's third colt foal in a row. He was a beautiful, correct foal - quick to learn and trouble-free.

"Wicked Crack was a fantastic mother, she was very protective of her foals and always liked you to keep out of the way once they were up and drinking. Seeing you at feeding time was enough for her."

Asked to pick out his highlight from Cue Card's racing career, Crellin points to his win in the 2015 King George VI Chase: "I think it was the toughest King George he had run in and for him to fight back against Vautour towards the finish of the race showed the class of the horse.

"As a breeder, the King George and the Gold Cup are the two races I aspire to breed a horse good enough to race in. For Cue Card to race in both these was fantastic, even better that he won one of these and did not disgrace himself in the other."

Wicked Crack, who was sourced by Crellin for a sale-topping €120,000 at the 2002 Tattersalls Ireland November Sale, proved adept at passing on her considerable talent to her offspring.

Her second foal, Hidden Crack, won five races over jumps while Cue Card was to prove her magnum opus, winning 16 races in total, nine of which came at the highest level - his other festival success a nine-length rout in the 2013 Ryanair Chase.

The fact Cue Card excelled at Cheltenham was not surprising - not only was Wicked Crack's half-brother What's The Crack third to Rolling Ball in the 1991 RSA Insurance Novices' Chase, he also shares his third dam with the 2002 Kim Muir Chase winner The Bushkeeper.

"I remember reading about Wicked Crack coming to Chepstow and finishing second," recalls Crellin. "Little did we know then our farm a few miles out the road would one day become her home!

"I had watched her race on the TV, and she always seemed to be racing in such great company as the likes of Limestone Lad, Florida Pearl and Native Upmanship. She raced against these great geldings and was never far out of the frame.

"When she was bought, I picked her out as one of the best mares in the catalogue. When I went to see her in her box on the day of the sale, she came at me with her two ears back, bearing her teeth ready for attack. That was it, complete love at first sight - I had to have her!

"Unfortunately, we lost Wicked Crack last year - she is greatly missed about the farm. She had a great personality and over the years had mellowed a bit. It came as a shock when she died as she had been in great form and behaved more like a two-year-old than a 24-year-old." 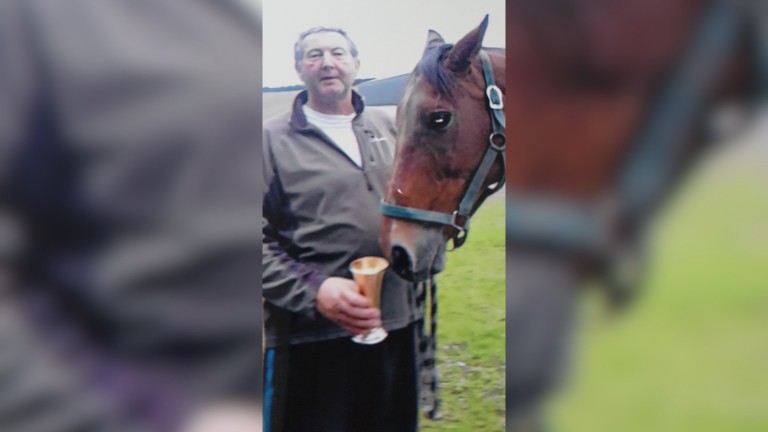 Rowland Crellin and Wicked Crack, together with the Dudgeon Cup, which is awarded to the National Hunt Broodmare of the Year
Rowland Crellin

Looking to the future

Crellin is now in the fortunate position of having retained all three of Wicked Crack's daughters to breed from - including the ten-year-old The Wicked Kipper, who is Cue Card's only full-sibling.

"The Wicked Kipper has already given me three foals," says Crellin.

"Her oldest offspring is a Flemensfirth filly and will be consigned at Tattersalls Ireland Derby Sale this June, her two-year-old Presenting filly will be retained and her yearling Leading Light colt will go to the Derby Sale as a three-year-old. She is in foal to Getaway and is due later this year.

"Wicked Crack's three-year-old Milan filly has just been covered earlier this week by Getaway, so its fingers crossed on that Her two-year-old Leading Light filly will also be retained on the farm."

Likely to hit the racecourse much sooner is Wicked Crack's four-year-old Gold Well gelding Hugos Other Horse, purchased at Cheltenham for £80,000 last year by Tom Malone and Paul Nicholls and who now appears in the colours of the Stewart family on the trainer's website.

"Hugos Other Horse is a lovely, big chasing type," says Crellin. "He is with the right people  He will be given every opportunity so with a bit of luck he is a horse to look out for in the future."

"I am so proud to be the breeder of Cue Card, seeing the fantastic reception he received at Ascot this year when he was second to Waiting Patiently was very humbling," concludes Crellin.

"During the period of his dominance in British racing, the TBA were giving breeders financial rewards for breeding high-class horses.

"I was lucky enough to have bred one of the top British-bred horses during this period and the financial prizes helped enable me to expand the number and quality of broodmares I have, as well as improve my facilities."

FIRST PUBLISHED 11:22AM, APR 19 2018
He was a gorgeous foal when we had him here and he's obviously played a great part in my life