At The Sales INGLIS

I Am Invincible colt smashes record at Premier Yearling Sale 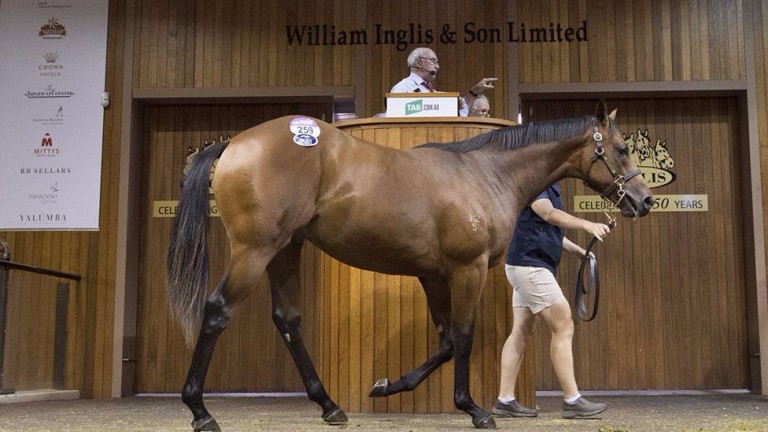 I Am Invincible’s growing reputation as a sire transferred to the Inglis Melbourne Premier Yearling Sale on Monday when a colt by the Yarraman Park Stud resident sold for A$1.4 million, and in the process became the most expensive yearling ever sold in Victoria.

The colt, who is out of the winning Encosta De Lago mare Soorena and is a half-brother to Group 1 hero The Quarterback, was bought by Ciaron Maher after a protracted bidding duel. Robbie Griffiths, who trains The Quarterback, was underbidder on the Gilgai Farm-consigned lot.

He was bred by Rick Jamieson, the man responsible for breeding Australian wondermare Black Caviar, and eclipsed the previous Premier Yearling Sale record of A$750,000 set in 2008.

Maher said: “I thought he was a lovely type and obviously he’s got a stallion’s pedigree, is a cracking type and I’ve loved the way he’s developed the past six months. He’s a great mover, got a great temperament, he’s got what it takes.

“I don’t always inspect before looking at my catalogue but I did with this particular draft and I quite like that way of doing it. You’re not influenced by pedigrees or fashionable stallions or anything like that. Gilgai have done a great job again. They seem to do it year after year.

“I’m very excited to be able to get him home and I can’t wait to get him into the stable.”

I Am Invincible, a son of Irish National Stud stalwart Invincible Spirit, is the sire of leading performers Brazen Beau, I Am A Star, Illustrious Lad and Voodoo Lad.

Inglis’ Victorian bloodstock manager Simon Vivian said: “We came into day two knowing we had some outstanding yearlings to offer the market and this was ultimately supported by the vast buying bench in attendance, where those quality yearlings realised very pleasing results.

“Undeniably, the highlight was selling Gilgai Farm’s I Am Invincible colt for A$1.4 million. Such theatre has not been seen in the Oaklands ring before and I’m delighted for the vendor, excited for the purchaser and respectful for the underbidders.”

Nancy Sexton profiles I Am Invincible's rise through the sire ranks

FIRST PUBLISHED 12:00PM, FEB 27 2017
He’s got a stallion’s pedigree, is a cracking type and I’ve loved the way he’s developed the past six months