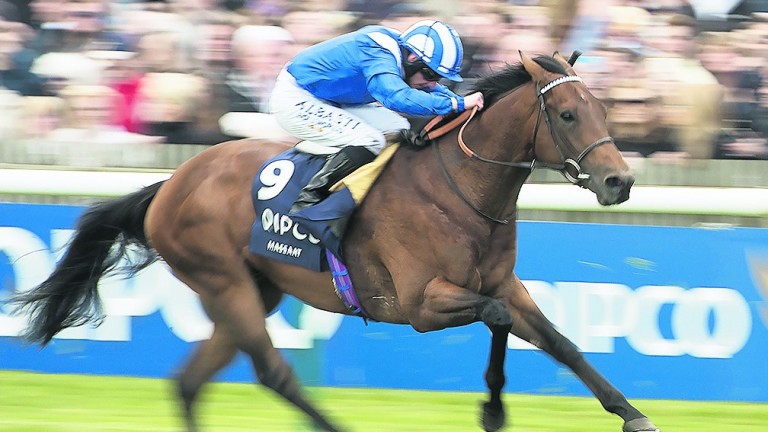 Hungerford Stakes winner Massaat has been purchased by Richard Kent and will stand at Mickley Stud from next season, in a deal brokered by John Walsh Bloodstock.

The five-year-old son of Teofilo competed at the highest level at two, three and four and broke his maiden at the second time of asking when winning by almost four lengths at Leicester.

On his third and final juvenile start, he ran on well to finish second to Air Force Blue in the Dewhurst Stakes. He finished second in the 2,000 Guineas to Galileo Gold on his seasonal return, with the likes of Ribchester, Air Force Blue and Marcel in behind.

His career best run came at four, winning the Group 2 Hungerford Stakes at Newbury, for which he earned a Racing Post Rating of 118.

He then finished third to Ribchester in the Prix du Moulin, and signed off his racing career when second to Limato in the Group 2 Challenge Stakes at Newmarket.

A Shadwell homebred, Massaat is a half-brother to Eqtidaar, winner of the Commonwealth Cup at Royal Ascot this year, and is closely related to Group winners Scottish and Royal Empire, both by Teofilo.

He is from the immediate family of Classic-winning miler Precieuse, Harmless Albatross, Volochine and Toulon.

A number of shares in Massaat have been made available to breeders, while his introductory fee will be announced at a later date.

Owen Burrows, trainer
Massaat’s win in the Hungerford Stakes was one of my best days in racing. He was a top Group 1 performer and so consistent from two to four years. A good looking, honest and sound individual.

Angus Gold, Shadwell racing manager
Massaat is a big, good looking individual. He possessed class and speed. He comes from a fast female family and I have no doubt he will do very well at stud.

FIRST PUBLISHED 1:56PM, AUG 30 2018
His career best run came at four, winning the Group 2 Hungerford Stakes at Newbury, for which he earned a Racing Post Rating of 118