Bloodstock Latest WHAT WE LEARNED

How the O'Briens bred two Breeders' Cup winners from a 14,000gns mare and more 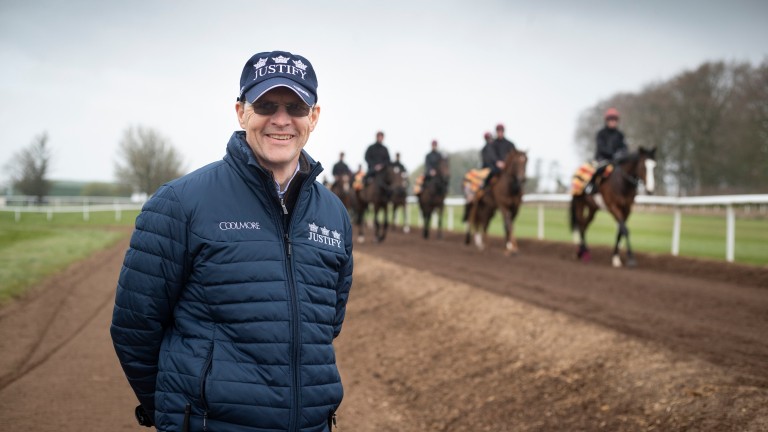 1. Order Of Australia bred for the job

Aidan O'Brien is no stranger to training Breeders' Cup winners, having notched his 13th with outsider Order Of Australia in the Mile on Saturday, a race in which he also fielded the second and third, Circus Maximus and Lope Y Fernandez.

But the result of that Grade 1 contest also reaffirmed O'Brien and his wife Annemarie's prowess as breeders, with the colt bred under the couple's Whisperview Trading banner. The colt is out of Senta's Dream, a daughter of Danehill who now has the extremely rare distinction of having supplied back-to-back Breeders' Cup winners.

Order Of Australia is the mare's seventh foal while her sixth is none other than Iridessa, who won the Filly & Mare Turf for O'Brien's son Joseph last year. Both are by Derby-winning sons of Galileo, with Iridessa by Ruler Of The World and Order Of Australia by Australia, for whom he became a second top-level scorer after Galileo Chrome landed the St Leger. 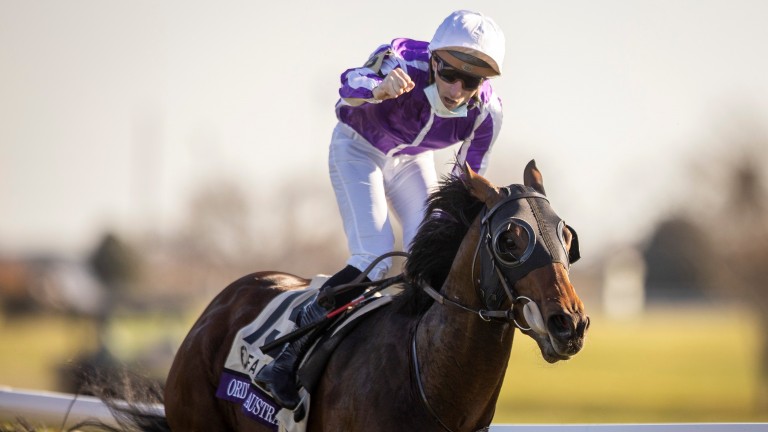 Order Of Australia: third Group 1 winner of the year for Aidan O'Brien and Pierre-Charles Boudot
Bobby Ellis (Getty Images)
Australia and Ruler Of The World are not the only Derby winners that Senta's Dream has clicked with, as her two-year-old filly Santa Barbara, who made an impressive winning debut at the Curragh in September, is by Coolmore's Camelot.

Remarkably, considering the success she has gone on to achieve for the O'Briens, Senta's Dream joined the Whisperview Trading broodmare band at a cost of just 14,000gns when purchased through BBA Ireland at the 2013 Tattersalls December Sales.

Although Order Of Australia was sent off at long odds at Keeneland, those who had delved into his pedigree may have been more optimistic about his chances, as he is certainly bred for the task with Breeders' Cup success running throughout his family. 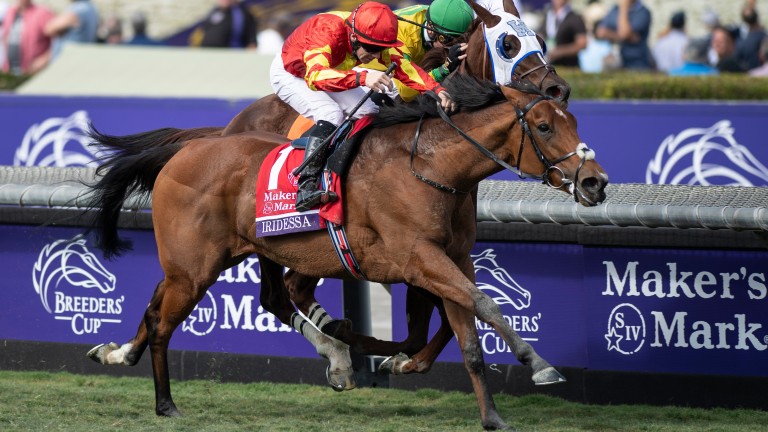 Iridessa (red) lands the Breeders' Cup Filly & Mare Turf
Edward Whitaker
Not only is he a three-parts brother to last year's Filly & Mare Turf winner, Senta's Dream is a daughter of Danehill and the Mendocino mare Starine, who in turn won the Filly & Mare Turf in 2002 while in training with Bobby Frankel.

What's more, Australia is by Galileo and out of the great Ouija Board, whose seven top-flight victories included wins in the Filly & Mare Turf in 2004 and 2006. 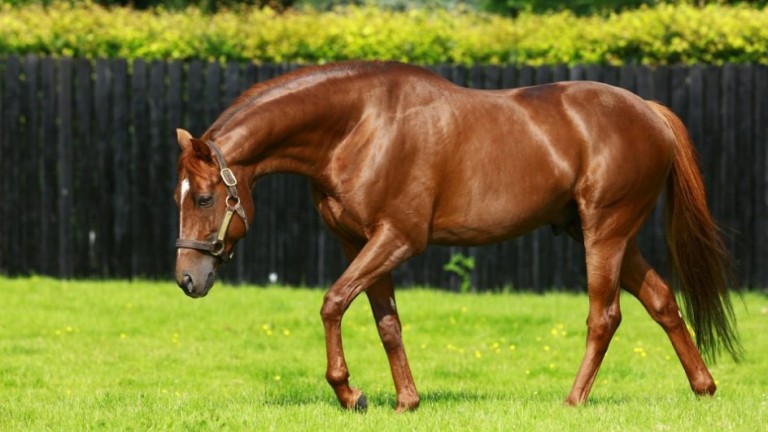 The amount of stallions who can be considered successful on a domestic level is small enough, so the number who go on to achieve international acclaim is, frankly, miniscule. Lope De Vega is one of the rare cases who falls firmly into the latter category.

The son of Shamardal sired his 12th elite winner on Friday when Aunt Pearl, trained by Brad Cox but bred in Ireland by Ecurie Des Charmes and Ballylinch Stud, landed the Breeders' Cup Juvenile Fillies Turf in decisive fashion. 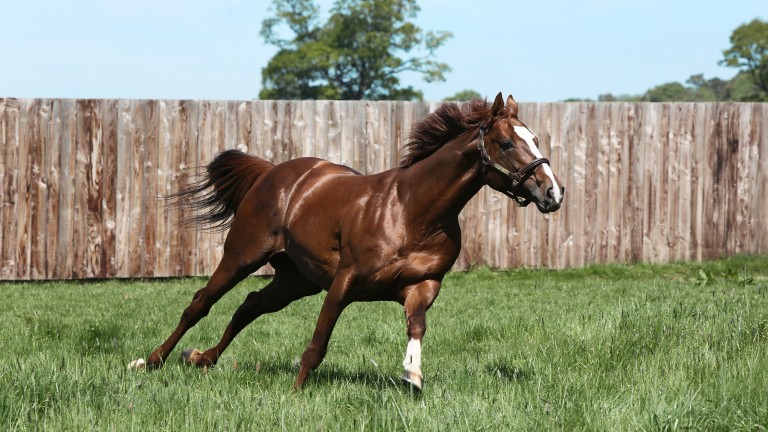 Lope De Vega: sired his 12th top-level winner at the Breeders' Cup
Ballylinch Stud
Lope De Vega never raced outside of France himself, but his stallion career has taken a much more global trajectory.

His first Irish-bred crop contained Belardo, winner of the Dewhurst at two and the Lockinge Stakes at four and now a promising sire in his own right, while his fifth produced Irish 2,000 Guineas hero Phoenix Of Spain and his seventh yielded this year's Phoenix Stakes scorer Lucky Vega.

He shuttled from Ireland to Australia's Patinack Farm from 2011 to 2014, a stint that resulted in five-time Group 1 winner Santa Ana Lane, dual top-level scorer Vega Magic and Gytrash, who struck in this year's Black Caviar Lightning.

He has been represented by a brace of Group 1 winners in France through the Irish-bred pair Jemayel, who landed the Prix Saint-Alary, and Zabeel Prince, who claimed the Prix d'Ispahan. 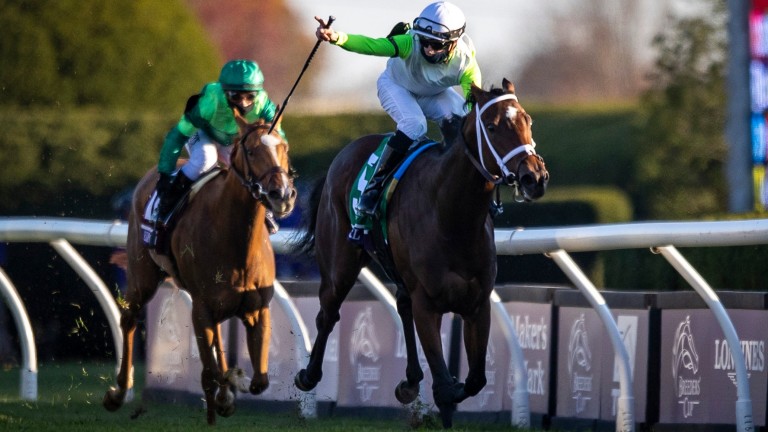 Rounding out his dozen Group/Grade 1 winners is The Right Man, another member of that debut crop, who went on to win the Al Quoz Sprint at Meydan.

Those names sit atop a list of 125 global stakes performers, which have come from a pool of 862 runners. This means Lope De Vega is operating at a strike rate of 14.5 per cent stakes horses-to-runners, statistics that can be considered nothing short of exceptional, particularly considering he once stood for as little as €12,500. 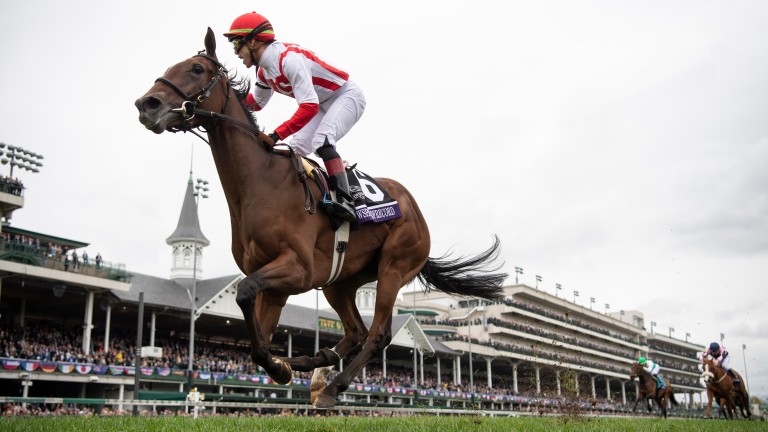 Newspaperofrecord gives Lope De Vega a first Breeders' Crup winner in the Juvenile Fillies Turf in 2018
Edward Whitaker
With the progeny of bigger and better-bred books in the pipeline - he covered 178 mares, 72 of which are stakes winners, at a fee of €100,000 in 2020 - the best is surely still to come.

Moreover, Lope De Vega was not the only stallion with ties to Ballylinch who enjoyed a big Breeders' Cup result, as Bearstone Stud's homebred Glass Slippers is by Dream Ahead, who stood at the County Kilkenny farm in the year the lightning fast filly was conceived.

Eyebrows were raised around the bloodstock world in August when it was announced that Coolmore had purchased Wootton Bassett from Haras d'Etreham and would be switching the son of Iffraaj from France to Ireland for the 2021 breeding season.

The sums believed to be involved in acquiring a relatively young stallion on a steep upward curve were understandably eye-watering. The big question was whether Wootton Bassett could continue to build on the immense promise he had shown.

However, barely a day has gone by since Coolmore announced their new recruit that he has not enhanced his standing further, and that trend continued at the Breeders' Cup when Audarya showed class and courage in abundance to land the Filly & Mare Turf. 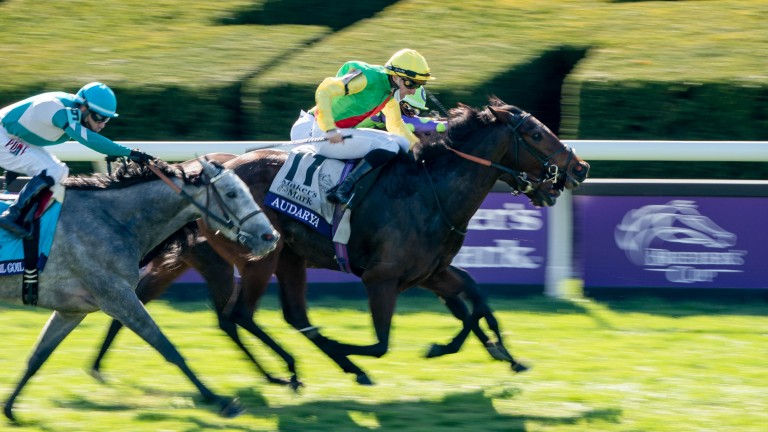 Audarya became Wootton Bassett's second elite winner when landing that French Group 1, joining European champion Almanzor. That list has not only doubled but tripled since Coolmore bought Wootton Bassett, with son Wooded going on to get the better of Glass Slippers in the Prix de l'Abbaye.

Those Group 1 winners have been joined by the Group/Grade 2 scorers Chindit, winner of the Champagne Stakes, and Tamahere, who landed the Sands Point Stakes for Chad Brown, both of whom struck after the news that Wootton Bassett would be moving to Ireland. 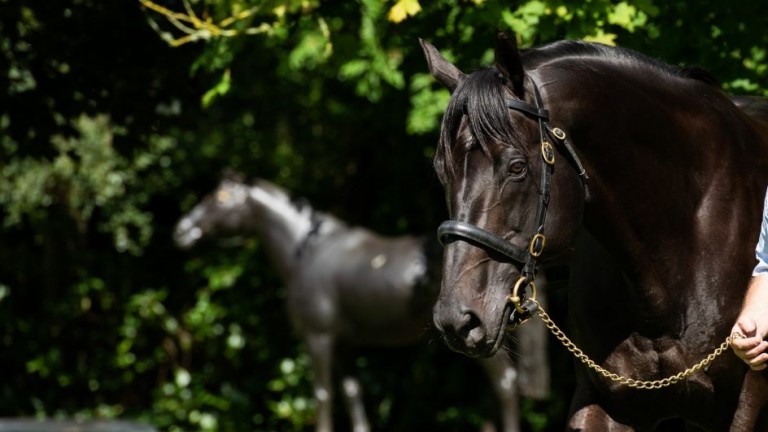 Wootton Bassett takes in his new surroundings at Coolmore
Coolmore
It should, of course, be remembered that his Group 1-winning trio were bred at a fee of just €6,000 or lower, with Audarya, from his fourth crop, conceived at a mere €4,000.

That he has sired 28 stakes horses from just 228 runners (12 per cent strike rate), most of whom were bred at chickenfeed prices, means Wootton Bassett has the potential to prove a truly exceptional stallion.

It will be fascinating to see what his more expensively-bred crops can achieve, not least once he has had access to the many blue-blooded Galileo mares within Coolmore's broodmare band.

4. Uncle Mo's influence on the rise

Uncle Mo had a hand in not one but two winners on the opening day of the Breeders' Cup as the Coolmore US stallion capped another productive campaign. Uncle Mo was on the mark as the sire of Golden Pal, who atoned for a narrow defeat in the Norfolk Stakes at Royal Ascot by landing the Grade 2 Juvenile Turf Sprint.

Randall Lowe's homebred is out of Lady Shipman, a prolific stakes winner who was also runner-up to Mongolian Saturday in the Breeders' Cup Turf Sprint in 2015. Uncle Mo, who will command a fee of $175,000 in 2021, sits second only to Into Mischief on this year's US leading sires' list and currently has eight Grade 1 winners on his stud CV. 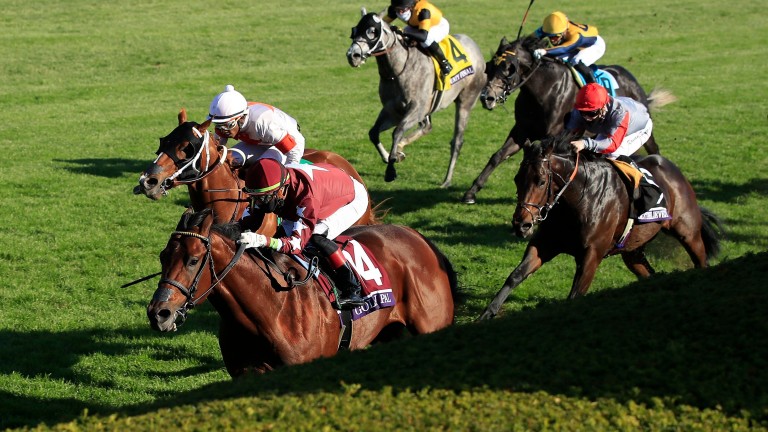 Trained by Robert Reid Jr for Gary Barber, Wachtel Stable and Swilcan Stable, the filly was landing her second Grade 1, having earlier won the Spinaway Stakes. She is one of two first-crop Grade 1 winners sired by Nyquist, who is the leading North American first-crop sire by progeny prize-money earnings, after Gretzky The Great landed the Summer Stakes. 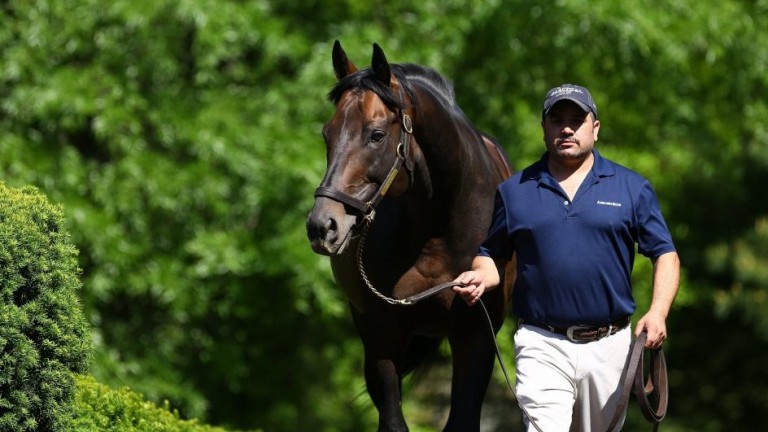 Uncle Mo: Coolmore's US resident is an emerging sire of sires
Coolmore America
Moreover, Nyquist is not the only first-season sire son of Uncle Mo to make his mark this season, with three of the top four North American freshman stallions all by the Coolmore resident.

In third is WinStar Farm's Laoban, who was represented by Breeders' Cup Juvenile third Keepmeinmind and Juvenile Fillies fourth Simply Ravishing, while Outwork, another WinStar resident, sits in a close fourth. Outwork fielded Outadore, who finished third to Fire At Will and Battleground in the Juvenile Turf.

Authentic's dam, carrying a full-sibling to Breeders' Classic hero, up for sale

FIRST PUBLISHED 2:06PM, NOV 8 2020
The colt is out of Senta's Dream, who now has the extremely rare distinction of having supplied back-to-back Breeders' Cup winners