Martin Stevens looks at the venerable shuttler's record as grandsire 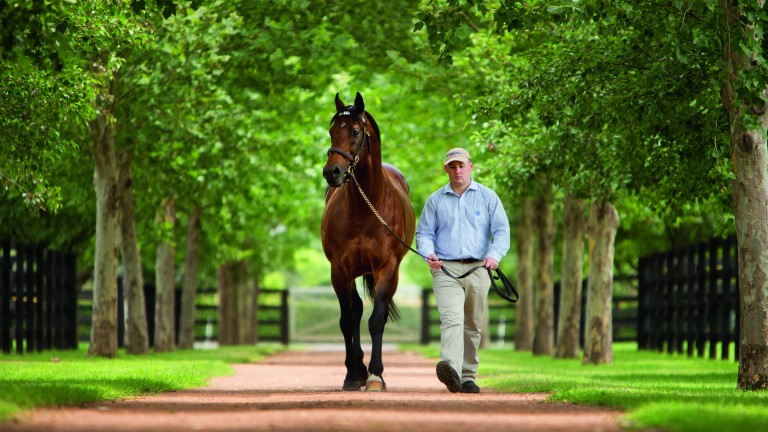 The 2018 Flat season marked ten years since Exceed And Excel's first northern-hemisphere bred runners graced the track. Over the past decade the Australian-bred son of Danehill has supplied 150 stakes winners worldwide, marking himself down as an outstanding source of precocious performers and high-class sprinters and milers.

It was business as usual this year, with son Mr Stunning landing the Hong Kong Sprint this month and the likes of Degas, James Garfield and Queen Of Bermuda scoring at Pattern level in Europe.

As befits Exceed And Excel's new stature as an elder statesman of the stallion ranks, he not only supplied his customary slew of stakes winners in his own right but also made his presence felt in the second generation of elite runners.

Most strikingly, this was the year that he established himself as an effective and commercially desirable sire of sires.

His first two notable sons to stud in Europe, Excelebration and Helmet, retired to stud in 2013 and so their eldest crop are four-year-olds.

Excelebration, three times a Group 1 winner over a mile despite being a contemporary of Frankel – no mean feat, that – has had his fee cut to €8,000 from an opening point of €22,500 but the Coolmore resident has provided at least one true top-notcher in Barney Roy.

Helmet, whose racing career mirrored his sire's in that he shone in his native Australia before making one last disappointing start in Britain, also has a somewhat uneven progeny record, with his standout son Thunder Snow holding a peak Racing Post Rating some 11lbs in advance of his next best offspring.

Helmet has been given a change of scenery for the 2019 breeding season, moving from Darley's Dalham Hall Stud in Newmarket to Gestüt Fährhof in Germany. The transfer appears to make sense, as the stallion hails from a fine family with German roots – his third dam is Preis der Diana winner Anna Paola, also ancestress of Group/Grade 1 winners Ave, Billesdon Brook and National Defense – and breeders must be hoping he will inject some speed into local stamina-laden bloodlines.

Exceed And Excel's next significant European sire sons were Bungle Inthejungle and Kuroshio, who retired to stud in 2015 and thus had first-crop two-year-olds this year. They impressed in quite a different manner from Excelebration and Helmet, who were retired to stud at larger fees and enjoyed the benefits of having the breeding superpowers of Coolmore and Darley behind them.

Bungle Inthejungle, a dual Group 3-winning sprinter at two, retired to Rathasker Stud at a price of just €5,000 and, although he was well supported in numerical terms, he did not get the same quality of mare many of his freshman peers were afforded and his debut yearlings sold for an average of just 13,020gns.

Against that backdrop, it is all the more creditable that he has been represented by 26 winners in Europe including Molecomb Stakes victor and Middle Park Stakes third Rumble Inthejungle. He has earned a pay rise to €12,000 per cover next year.

Kuroshio faced an uphill battle to make a name for himself in Europe, with a debut crop of just 22 juveniles to go to war with. The former Overbury Stud inmate struggled for support, possibly because his shuttle trip was announced late and he was an unfamiliar name to British breeders, never having raced outside of Australia.

However, he made people sit up and take notice when from just 16 runners he delivered six winners including Dunkerron, who ran second to Dark Vision in the Vintage Stakes; Daphinia, who found only Signora Cabello too good in the Listed Marygate Stakes; and Kurious, a lightly raced filly who has finished fourth in Listed company.

Unsurprisingly, considering that disregard from European breeders, Kuroshio did not return to Overbury Stud. However, on the back of those fine racecourse results, he is back in Europe next year under the Compas Stallions banner at Clongiffen Stud and deserves more patronage to show what he can do with better ammunition.

The next two Exceed And Excel sons to have their sire-power tested are the Darley Club pair of Fulbright and Outstrip. Those breeders who took advantage of the loyalty scheme by sending the stallions mares in all their first three seasons at stud to earn a lifetime breeding right could be forgiven for having their hopes of gaining a share of a valuable stallion for a song increased, in light of what other low-cost options Bungle Inthejungle and Kuroshio have achieved.

Buratino, another son of Exceed And Excel in the Darley Club, will have his first yearlings go through the ring in 2019, when the first foals by Tally-Ho Stud's popular recruit Cotai Glory will be born.

The latest son of Exceed And Excel retired to stud in Europe is Mill Reef Stakes winner and Prix Maurice de Gheest runner-up James Garfield, whose appeal at Rathbarry Stud will be enhanced by the fact he hails from the family of prolific sire half-brothers Invincible Spirit and Kodiac.

Another to look out for, slightly further afield, is Sidestep. The Australian Group 2-winning half-brother to high-class pair Ambidexter and Skilled shuttled to Haras du Logis in Normandy for the past three years and his early young stock were noted for their good looks. His first juveniles will race next year.

So far there has been more to write about Exceed And Excel as a sire of sires in Europe than in the southern hemisphere, but as a broodmare sire it has been a case of vice versa.

His daughters across Australia, New Zealand and South Africa have produced 20 stakes winners including Group 1 celebrities Alizee, Astern, Bounding and Prompt Response, while those in Europe have produced ten.

One of Exceed And Excel's best performers as broodmare sire in Europe, this year's Futurity Stakes winner and National Stakes runner-up Anthony Van Dyck, is a half-brother to Bounding. Their dam Believe'N'Succeed – a sister to none other than Kuroshio – was imported to Ireland from Australia to be mated with Galileo.

Anthony Van Dyck formed part of a breakthrough season for Exceed And Excel in Europe in the damsire department. His Ballydoyle stablemate Ten Sovereigns, by No Nay Never out of the Listed-placed Seeking Solace, was unbeaten in three starts including the Middle Park Stakes, while Well Done Fox, a son of Acclamation whose dam is Listed scorer Excelette, was a dual Listed-winning two-year-old who also took second in the Flying Childers Stakes.

Results from this month's Tattersalls December Breeding-Stock Sale suggest that breeders have cottoned on to the benefits of having an Exceed And Excel mare in their strings. Only nine came on the market – seven fewer than last year, so perhaps they were being kept hold of by prudent studs – and they sold for a median price of 70,000gns, up from 39,000gns in 2017.

Breeders love identifying a trend and attempting to recreate that success, so we can expect Exceed And Excel stallion sons and broodmare daughters to be more sought after and given better chances in the coming years.

In another ten years' time in 2028, we might be looking back at Darley's venerable shuttler not merely as an important stallion but that rare thing: a breed-shaper.

German stallion ranks enhanced by the arrival of Helmet

FIRST PUBLISHED 5:56PM, DEC 21 2018
Anthony Van Dyck formed part of a breakthrough season for Exceed And Excel as a broodmare sire in Europe