How a star was born: the breeding behind Hong Kong's favourite horse

Martin Stevens runs the rule over the unpredictable Pakistan Star 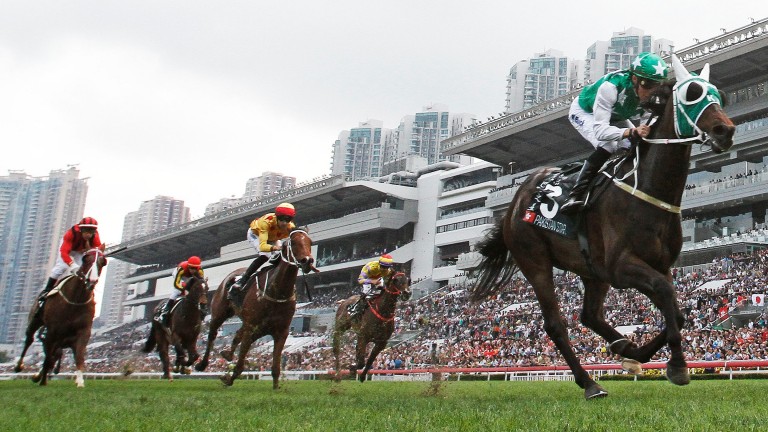 Pakistan Star, who has so often shown glimmers of brilliance but has been let down by his volatile nature, finally got his act together in top-level company when running out a three-length winner of the Audemars Piguet QEII Cup at Sha Tin in Hong Kong under William Buick on Sunday.

The Tony Cruz-trained five-year-old had finished a neck second to Neorealism in the race last year but is better known for being a habitual slow starter, sometimes refusing to race altogether.

Pakistan Star's unpredictability but evident talent has made him the most popular horse in Hong Kong and he was roared home by his faithful fans at Sha Tin and given a hero's welcome after hitting the Group 1 bullseye for the first time.

Buick, who was standing in for first-choice jockey Silvestre De Sousa, required to remain in Britain, and intended replacement Kerrin McEvoy, who was laid low with an ear infection, reported: “He’s quite a famous horse for his antics so I was aware of him and I was aware of what he can do.

“I took on board all of the information I knew about the horse and also thought it was quite important to ride him with a fresh mind and just be very positive about the horse.

“Tony did say he’s not a horse you can bully into doing things, you have to treat him with kid gloves and make him want to do it, rather than make him do it. He never gave me any kind of indication that he was going to do what he has done in the past.

“He felt beautiful today and when he quickened up the straight he felt like a world class mile-and-a-quarter horse – the field was stacked with stars.”

Pakistan Star's escapades go all the way back to his sale to owner Kerm Din.

He was originally sold by Haras d'Ombreville on behalf of breeder Gestut Wittekindshof as a yearling at the Arqana August Sale in 2014, with Mark Richards of the Hong Kong Jockey Club signing the docket at €180,000.

So far so good, but when he was re-offered as Lot 14 at the Hong Kong International Breeze-up Sale in March 2016 he refused to race after the seven-furlong pole when put through his paces in front of potential buyers, needing hard riding to complete the piece of work in unimpressive fashion.

Pakistan Star is atypical of the straightforward, honest performers his sire Shamardal can usually be relied upon to produce.

The other 18 elite-level winners that the Kildangan Stud stalwart has supplied in both hemispheres include Dariyan, Faint Perfume, Lope De Vega, Mukhadram and Tryster.

Nor is Pakistan Star the first top-notcher in Hong Kong by Shamardal as the sire is also responsible for Able Friend, whose big race haul included the Hong Kong Mile and Champions Mile, and Dan Excel, another who scored in the Champions Mile.

Indeed, Pakistan Star hails from that brilliant 'N' family as he is out of Nina Celebre, a Listed-winning daughter of Peintre Celebre and Next Gina who has also produced the Listed-placed Ninas Terz to Tertullian.

Incidentally, the cross of Shamardal over a Peintre Celebre mare has also produced Group 3-winning sprinter Lightning Moon, Prix du Moulin runner-up Akatea and Australian Group 3 second Goldstone from only 11 horses bred on that pattern to have run and made it onto the Racing Post database.

Nine Celebre, who has a two-year-old filly by Mastercraftsman and a yearling filly by Golden Horn, also hails from the family of Deutsches Derby winner Nutan and fellow Group 1 scorers Nightflower and Nymphea.

Pakistan Star serves as a reminder that not only does Shamardal appear to have an affinity with Hong Kong racing and Peintre Celebre mares, but also with German breeders.

Gestut Ammerland bred two Group 1 winners from him, Baltic Baroness and Lope De Vega, while Fahrhof produced another in Zazou. Group 2 scorers Akua'Da and Sommerabend were also the work of German breeders, in Gestut Brummerhof and Gestut Schlenderhan respectively.

Sadly Shamardal is now beyond the reach of German breeders – and anyone outside of the Maktoum family – as the sire has covered private books at Kildangan in the past three seasons.

An ace for Authorized: how Grand National hero Tiger Roll was bred

A tour de force: why the Normandy sire scene is stronger than ever