Host of top-level winners and producers among impressive second book 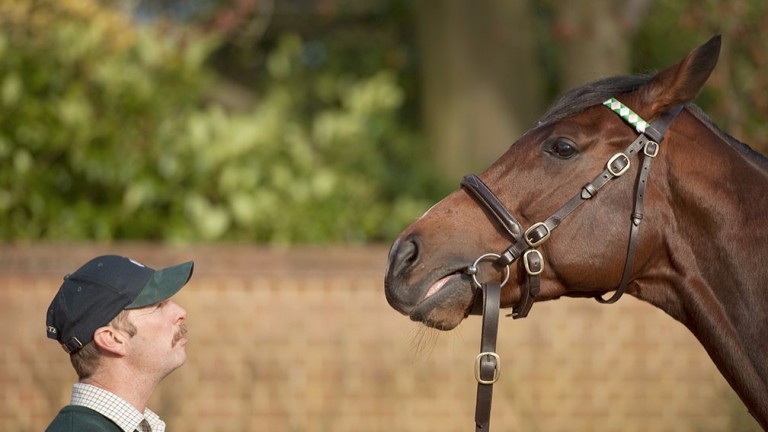 That success followed on from Queen Kindly winning the Group 2 Lowther Stakes, and Cunco, Fair Eva, Frankuus, Mi Suerte and Toulifaut also getting off the mark in Group company.

And with a total of 18 winners worldwide by the close of 2016, anticipation is building for both Frankel's second crop, and the chance to see just how well his progeny have trained on as three-year-olds.

His progeny that went through the ring at last year's yearling sales will be competing as juveniles in the not too distant future, and they will be aiming to bolster Frankel's already impressive record as a sire of two-year-olds.

Off the back of his first crop’s success, the European yearling average for Frankel showed an increase of three per cent from 462,718gns up to 477,254gns, with 23 sold from the 26 yearlings on offer.

One observation that may temper enthusiasm is that the number of Group-winning mares he covered in his second season at Banstead Manor Stud fell from 67 mares (44% of the total book) to 53 mares (37%), and that he covered 143 mares - nine less than in 2013.

However, when you delve a little deeper into the pedigrees of those 143 mares, it is hard not to think this year's two-year-olds may well pick up where 2016's left off.

Shadwell forked out 1,600,000gns for the February-born colt out of the champion two- and three-year-old Attraction, who won both the 1,000 Guineas and Irish 1,000 Guineas and is dam of the sire Fountain Of Youth, who won the Group 3 Sapphire Stakes over 5f. The colt is in training with Mark Johnston and has been named Elarqam.

MV Magnier, Mayfair Speculators and Peter and Ross Doyle were also busy at the higher end of the market for Frankel yearlings and went to 1,300,000gns for a colt out of the Pivotal mare Peeress. She was a classy miler winning the Lockinge Stakes and Sun Chariot Stakes. Her April-born colt is in training with Aidan O’Brien.

The same buyers also went to seven figures to secure a colt out of the Machiavellian mare Tyranny. She won twice at three, and is already the dam of sons at stud, the Denmark-based Wilshire Boulevard and the popular Coolmore sire Zoffany, winner of the Group 1 Phoenix Stakes over 6f. The February-born colt is in training with Aidan O’Brien.

Frankel also covered a Prix de l'Arc de Triomphe winner in Danedream, and the daughter of Lomitas looks set to have one of her first runners with her colt by Frankel. Danedream won five Group 1 races at three and four, but also opened her account as a juvenile.

Among the Classic-winning mares are three Oaks winners. Casual Look, a daughter of Red Ransom, was trained by Andrew Balding when she won at Epsom. Sariska won for Michael Bell in the colours of Lady Bamford, and the latter's juvenile colt is in training with John Gosden. Ramruma won the race in 1999 for Sir Henry Cecil, and her yearling filly was bought by Joe Foley for €225,000.

Ramruma and Sariska also won the Irish equivalent, as did Moonstone. The latter is the dam of US Army Ranger, runner-up in this year’s Derby, and her colt yearling will follow in his footsteps and head into training at Ballydoyle.

One that could make into a nice three-year-old is the colt out of Midday, a six-time Group 1 winner from 1m2f to 1m4f and three-time winner of the Group 1 Nassau Stakes. She has already produced Midterm by Galileo, who beat Algometer in the Group 3 Classic Trial at Sandown in April.

Selected mares covered by Frankel in 2014

Another to win the Nassau Stakes is the Dansili mare Winsili, a winner of the Goodwood contest on her fifth start for Gosden and owner Khalid Abdullah. Winsili’s colt yearling has been named Beau Rivage.

Fair Eva was one of Frankel’s best early performers. She won the Group 3 Princess Margaret Stakes at Ascot in July over 6f suggesting her two-year-old brother might be a nice early type to look forward to for the coming season.

While it is impossible to say until they have hit the track, there are enough pedigree pointers to suggest that Frankel's second crop could be every bit as good as his first crop was at two.

FIRST PUBLISHED 8:00PM, JAN 3 2017
While it is impossible to say until they have hit the track, there are enough pedigree pointers to suggest that Frankel's second crop could be every bit as good as his first crop was at two.