Honor A.P. to stand alongside his own sire at Lane's End Farm upon retirement 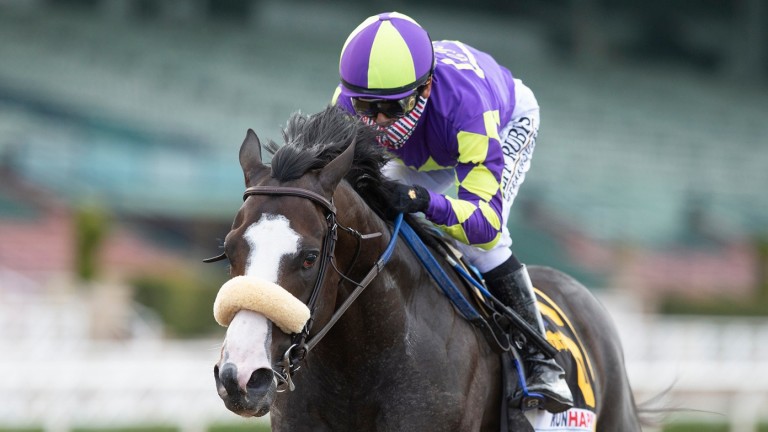 A third A.P. Indy sire line colt is positioned to join the Lane's End stallion roster with the announcement that Grade 1 Runhappy Santa Anita Derby winner Honor A. P. will be retired to the farm at the conclusion of his racing career.

Honor A. P. is from the first crop of Lane's End sire Honor Code and is his sire's highest earner to date, having banked $362,200 from four starts.

Honor Code, who is nine, is from the last crop of Lane's End's marquee sire A.P. Indy. He is the third-leading North American second-crop sire by progeny earnings through June 25. He is tied as the leader of his sire class by number of Grade 1 winners this year with Constitution at one apiece and co-ranked with Constitution and American Pharoah with two Graded stakes winners so far this year.

Alongside Honor Code on the Lane's End roster is William S Farish homebred Mineshaft, a 21-year-old son of A.P. Indy who was named Horse of the Year and champion older male in 2003. Mineshaft has sired 50 black-type winners so far.

"We are very excited to secure another prospect from the A.P. Indy line," said Lane's End's Bill Farish. "As is the case with most of our stallions, having a strong syndicate behind them is very important to their success.

"We are emboldened by the quality of the syndicate that has come together to support him. His looks, pedigree, and his growing resume as a top racehorse give him a great chance to be a successful sire."

Honor A. P. has finished first or second in each of his four starts, winning the Santa Anita Derby in his last outing on June 6 and establishing himself as a favorite for the Grade 1 Kentucky Derby Presented by Woodford Reserve.

"He's a horse that we have had an eye on since David Ingordo bought him as a yearling for Lee and Susan Searing's CRK Stable," Farish said.

"He was a standout at Saratoga and at $850,000 ended up being the highest-priced yearling in Honor Code's first crop. April Mayberry was quietly touting him while being broken, and [trainer] John Shirreffs has been high on him since he arrived at Santa Anita.

Honor A. P. debuted on August 17 at Del Mar, racing greenly to be second. He won his next start at Santa Anita Park in October as the 2-5 favorite, drawing away to win by five and a quarter lengths. Before he could race in 2020, he suffered a stone bruise in February that briefly sent him to the sideline.

He was second in his comeback and 2020 debut to Authentic in the Grade 2 San Felipe Stakes. He subsequently defeated the previously unbeaten Authentic next time out in the Santa Anita Derby, while posting a 102 Beyer Speed Figure, the highest of any three-year old colt currently on the Kentucky Derby trail.

"I think we started seeing something in Honor A. P. when he started to gallop, and he started to lengthen his stride," said Shirreffs. "If you ever see him, he just floats over the ground. He's only just begun to show his potential."

Honor A. P. will have one more start before the Kentucky Derby.

"We named Honor A. P. in homage to his grandsire, the breed-shaping A.P. Indy," said Lee Searing. "It has always been my goal to race a horse of this calibre and to stand him at Lane's End. I plan to keep an interest in Honor A. P. and help make him a top stallion."

Honor A. P. is out of the multiple Grade 1 stakes winner Hollywood Story, who won four Graded stakes and earned $1,171,105 during her racing career.

Hollywood Story has produced yearling and weanling fillies by Curlin and Tapit respectively in the past two foaling seasons.

Multiple Grade 1 winner Wild Rush is Honor A. P.'s broodmare sire. Like Honor Code, Wild Rush's top-level wins include the Grade 1 Metropolitan Handicap. Hailing from the Icecapade line, he was eventually exported to Japan and has been represented as a broodmare sire by 28 black-type winners so far.

For more news on US racing, breeding and sales visit bloodhorse.com

FIRST PUBLISHED 8:10PM, JUN 26 2020
We are very excited to secure another prospect from the A.P. Indy line